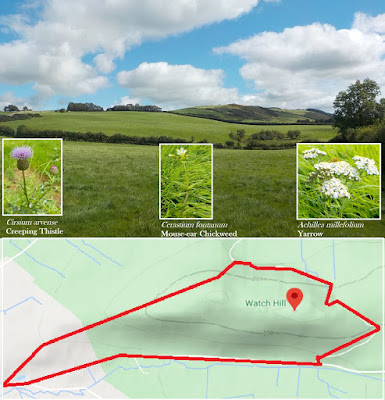 In Fell Walking For Wimps 1 we tackled Slate Fell. We’re just a bit to the north of that today at Watch Hill. A slightly stiffer climb to begin with, but nothing too strenuous, and it’s downhill all the way after we’ve reached the top. If you are wondering what people were watching for on Watch Hill, it was probably the Scots. Cumbria and Scotland have an interesting history between them and, as you’ll see when we get to the top, the Scottish region of Dumfries & Galloway is clearly visible across the Solway Firth.
Last week we were delving into cow pats on our way up, but today, by contrast, I thought I’d introduce you to a few common meadow flowers. The first of these is the Creeping Thistle, so called because it produces new shoots from the underground roots. These roots, and the stems (when despined) are edible, but have a tendency to cause flatulence. The second is Mouse-ear Chickweed. There are several common chickweeds which are difficult to tell apart, the closest of which is Sticky Mouse-ear who’s leaves are, would you believe, sticky. Then we have Yarrow, one of many similar plants called umbilifers, with large flat heads made up of many florets. The scientific name for the genus is Achillea, after Achilles, who used it to soothe his wounds in battle. Modern pharmacological studies show that it does have anti-inflammatory properties, so the old Greek knew a thing or two. 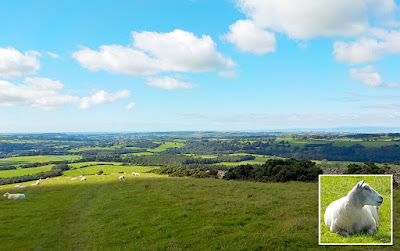 Here we are at the top and you can see Dumfries & Galloway away to the right. When I was in Crete, I learnt very quickly, that you couldn’t have a conversation without mentioning goats. I’ve found the same here in Cumbria, but with sheep. These, I’m reliably informed, are Texels, named after a Dutch island where they were first bred. Dear little things aren’t they? Very dear, in fact. One lamb fetched £367,500 at auction recently, a world record price (so expect a supermarket price hike – any excuse). 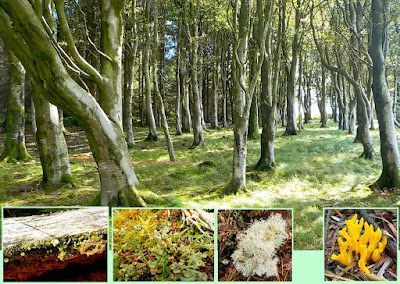 We’re off into the woods now. These trees at the beginning are Birch but as we get a bit further in, we’re into a conifer plantation. Not much grows beneath conifers as their needles make the soil too acidic, and being evergreens, no light reaches the woodland floor. It’s a good place to look for fungi and lichens though. This first one is a Pixie Cup Lichen. The cups are empty at first, then filled to overflowing with the red fruiting body, and then bubble over into a great mass of fluff. All far too frivolous for the golden Yellow Stagshorn fungus that you will only find growing on roots and stumps of conifers. Like most fungi, it is neither poisonous nor edible, this one’s just greasy and tasteless. 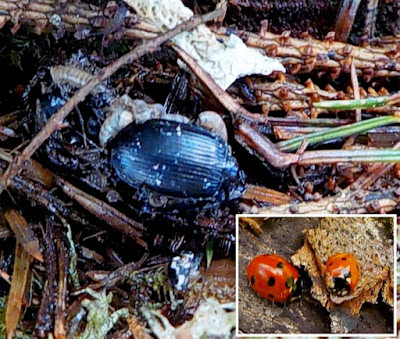 But what have we down here behind the lichen? It’s a Darkling Beetle. One of the few beetles I’ve seen in Cumbria, apart from lady beetles like those two over there (Why Lady Beetles, not Ladybirds? See Lucky Insects). Which begs the question: Whatever happened to the Beetles? I did a quick analysis and found that back in Crete, a quarter of the insects I met with were beetles, but here in Cumbria it’s only 12%. OK, I thought, maybe Crete has loads of beetles. But no, World Observations on iNaturalist showed that beetles account for 25% of insect observations as well. So I checked everybody’s insect observations in Cumbria, after all I haven’t been here long, and sure enough Beetles only account for 12%. So what have you done with them? Eaten them? Some secret Cumbrian recipe, unknown to us offcomers? Answers on a postcard please (or in the comments box below). 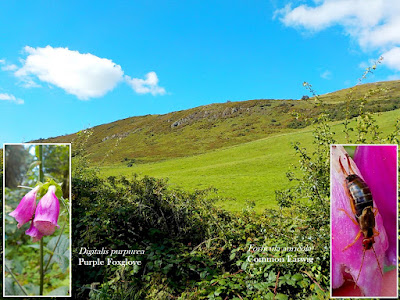 A nice, pleasant country lane back to our start point and a view of the hill – technically, a marilyn – and there’s a bird of prey quartering the ground that is just a bit too distant to identify. Back at ground level we have some Purple Foxgloves. These are the ones I warned you not to confuse when making Rosebay Willow Herb & Mint, Dessert Sauce as the heart drug, Lanoxin, is derived from it. Making a dessert sauce from this would probably kill you. As you can see, the flower shape is very different to Rosebay Willowherb. All of which doesn’t bother this Common Earwig nestling among the flowers. This looks to be a female, the pincers of the male are more curved, and they are unusual among insects in that they care for their young until they are old enough to fend for themselves. Fruit and rose growers tend not to like earwigs because of the damage they do to their plants, but the odd earwig or two is actually beneficial. They are only a nuisance in large numbers, but they have many predators, including birds, bats, amphibians and tachinid flies, which keep their numbers down. On the plus side, they are very partial to aphids, which do far more damage to fruit and roses. And that just about brings us back to where we started.

Explore Crete with the #CreteNature interactive Hiking and Nature Map