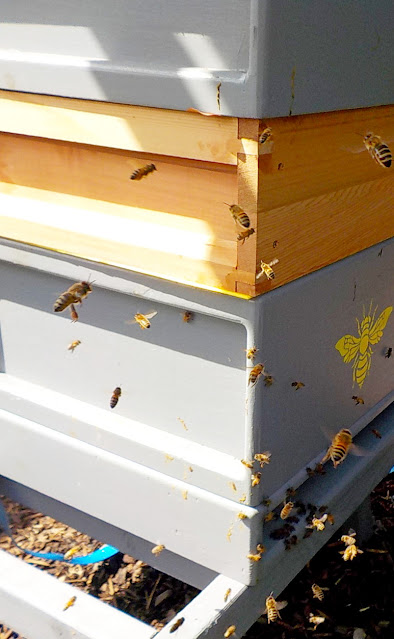 My partner keeps bees. We call them 'the girls' and speak to them regularly. They're a very good tempered bunch, they make delicious coastal honey and give neither us nor the neighbours any trouble, until last Friday.

A quick run down on bee keeping. You start with a nucleus containing a queen bee and a small colony of bees to support the queen. These you transfer to a brood box where they construct a network of hexagonal cells in which the queen lays her eggs. These then hatch and the nursery bees look after them. The majority of these will be pollen gatherers, but there are other jobs to be done in the hive, so there are undertakers, architects, guards, and the queen's personal attendants as well. All of these are female but a few male bees, (drones) are hatched, purely for breeding purposes.

Once the colony has become established you start placing smaller boxes on top where the bees make the honey to keep the colony alive through the harsh winter months. This you harvest and replace with sugary bee food. It's more complicated than that, of course, but that's the basic gist.

Hive number two is still at the brood box stage. Ishbel was making one of her regular inspections when something went seriously awry. Hive number one, now into its second year was fine, but hive number two, still in its first year was far from it. For some reason, the bees were angry. One got into her shoe and stung her, releasing pheromones to tell the other bees that the hive was under attack. The other bees responded to the call and Ishbel was stung numerous times, sending her into anaphylactic shock. Luckily, she recovered naturally without the need for hospitalisation, but it was a close run thing. But what had made the bees so aggressive?

The answer came on Sunday. We received a call at The Mill from one of her neighbours to say that a swarm of bees had taken up residence in his garden. Gathering up my sweep net, we rushed back to Lowca. And there they were, a great buzzing mass of uncertain temperament hanging from a bush. It would have been unwise for Ishbel to tackle them so soon, as a second attack could have been fatal, so the apprentice bee keeper was sent in. That was me. With an audience of fascinated neighbours, I enveloped the swarm in the sweep net, and carefully cut the colony from the bush. About 5kg of bees plopped into the net which I quickly twisted over to seal them in.

That took care of about 90% of the swarm but there was still a cloud of bees buzzing around which hadn't gone in the net. They didn't seem to feel threatened, they merely wanted to be with their queen, so Ishbel helped me to transfer the majority of the colony into a bee box. There, we let them be (no pun intended) until dusk when all the bees had gone into the box, and we had a new nucleus of bees, which Ishbel took back to her bee keeping station. So, what had happened? Our best guess is that the original nucleus for hive number two contained not one, but two queens. You can only have one queen to a hive, like you can only have one captain of a ship, and so, the colony divided, as they would in the wild. All's well that ends well, Ishbel has recovered and we now have a third hive to set up. Never a dull moment up here in Cumbria.

Although not intended for dealing with a swarm of bees, my trusty insect sweep net came in very handy. I'd recommend it, not only to bee keepers, but to anyone who, like me, has a fascination with the insect world. And, if I've not put you off the thought of bee keeping altogether, the British Bee Keepers Association have produced a book containing all you need to know.