Here be volcanoes! OK, Cumbria may not be the first place that comes to mind when considering the volcanic hotspots of the world, but some 460 million years ago this place was on fire. This was the bed of The Iapetus Sea, which was being squished as continents drifted into one another, setting off volcanoes and lava flows all over the place. Between then and now, this has been land, sea and ice at one time or another and pretty well tilted as you can see from the information board provided by the Cumbria Wildlife Trust. These rocky hummocks are the bits of volcanic lava, still visible after all these years. And how do they know all this? Those neat holes in the rocks are not made by incredibly strong boring beetles, as you may imagine, but by the lesser spotted geologists, who have been taking, and studying, samples of the ancient lava. 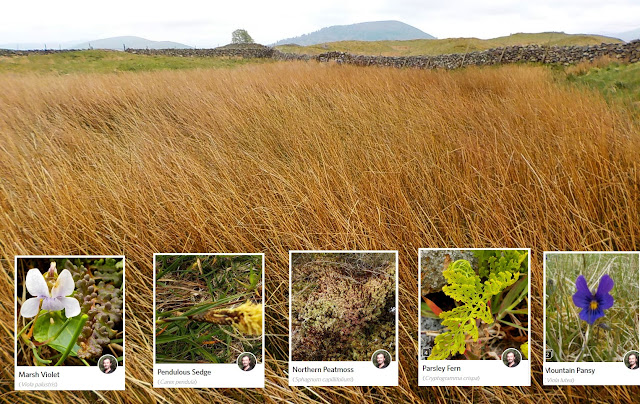 The flora up here is pretty special too. There are twenty species of sedge and eighteen species of Sphagnum moss up here (I think I've identified these correctly, but please feel free to put me right). There are marsh violets and mountain pansies and the beautifully lace-like Parsley Fern. 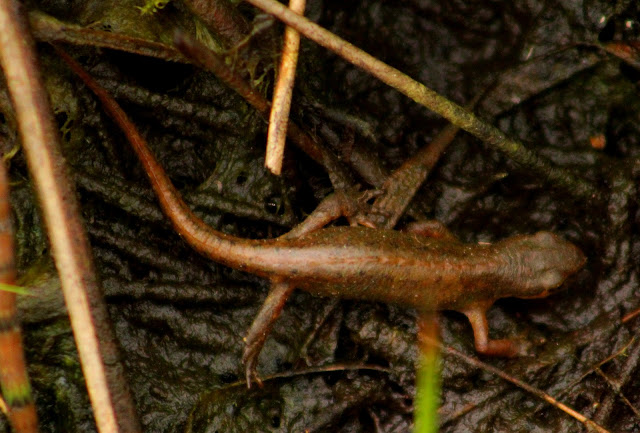 As I said in this month's European Nature Almanack, May is a good month to look out for reptiles and amphibians becoming more active after months of hibernation. This little fellow is a newt. We have three species here in the UK: the Smooth, or Common Newt, the Palmate Newt and the Great Crested Newt. This one has a shallow crest running from neck to tail, and there is no webbing on the back feet, so I think that it's a Smooth Newt. To be absolutely certain I'd have to check that he has black spots on his throat, but I don't want to disturb him. 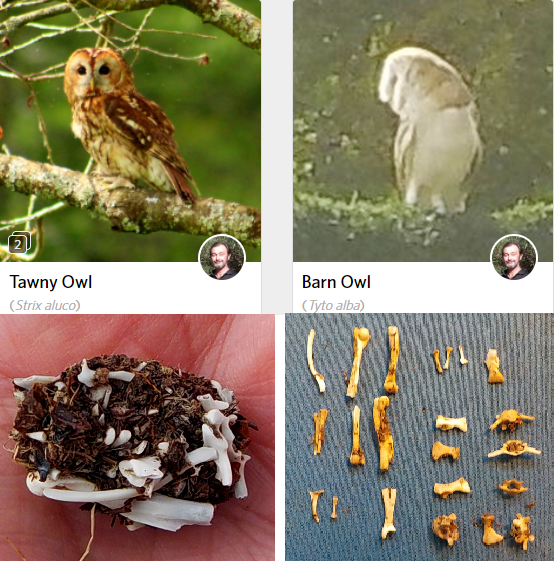 We have owls and small mammals too. We haven't actually seen any (these are two owls I made earlier, so to speak), but we do have evidence in the form of a regurgitated owl pellet. After half an hours prodding about, I've managed to extract 22 small mammal bones including leg, shoulder, vertebrae and occasional pieces of skull. 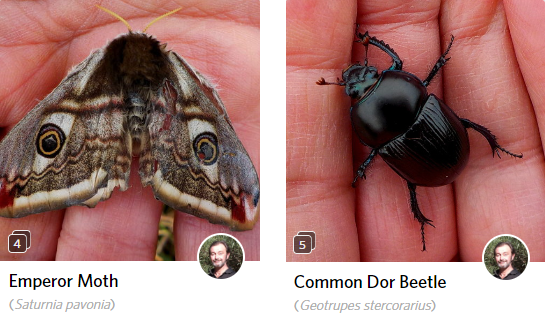 Now, it wouldn't be me if I didn't find a couple of insects to play with, and what a pair they are. The first beauty is an Emperor Moth, a grand name for a grand insect. This is one of about 2,300 species of large Saturnid moths, but the only one you'll find in the UK. They only live for about a fortnight as adults, because their only purpose is to mate. They cannot even eat, and have to rely on the food resources they built up as a caterpillar. The other fellow is a Dor Beetle. These are earth boring dung beetles who dig tunnels (up to 2 metres long in some species) beneath a pile of dung. This particular species is coprophagous, that is, it eats dung and provisions its nest with the same, but many Dor Beetles live on a diet of mouldy leaf litter. Can't say that either appeal to me particularly.