For many years I have been writing about natural history. Since moving back to the old market town of Cockermouth in Cumbria, I have developed an interest in the past. Initially my interest lay in scientific instruments and discoveries (John Dalton, who is known for his discoveries of atomic theory and colour blindness, was born In Eaglesfield, a village just down the road). Since then it has expanded somewhat. My habit of buying interesting items was somewhat incompatible with living in a bachelor pad, and so I launched Steve's Vintage Collectables. Now I can buy stuff, live with it for a bit, and pass it on. This way, I can surround myself with ever changing interesting things.

From the logo, you can see that I have added Antique, Retro and Future to Vintage but, what's the difference? Let's start with Antique, as that is easier to define. It is pretty well universally acknowledged to mean an object over 100 years old. This barometer, for instance, made in the late 1800s by James Hicks of London is definitely an antique. 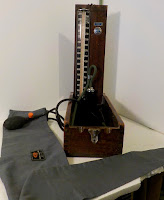 #Vintage is more difficult to define. Old, but too young to be called antique. I use it for items 65-100 years old (1922-1957). This sphygnomanometer (an old fashioned instrument for measuring blood pressure) probably just about falls into this range. It may possibly have been made in the early 1960s. 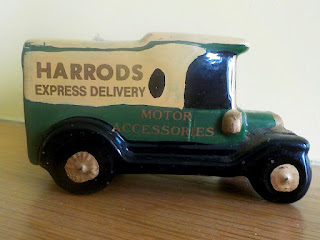 Retro is even more vague. It simply refers to things people like to collect from a bygone era, and has more to do with style than age. I use the term 'retro' on its own for things of the 1960s, 70s and 80s and 'vintage retro' for collectables from the 1920s to the 1950s. Anything after the 80s is too modern for me, but then again I'm bordering on vintage myself. This model Harrods delivery van candle is a collectable item from the 1980s which I would describe as retro. Etsy's automatic labelling defines it as 'Vintage Retro from the 1980s'. As I say, apart from Antique, the terms are not set in stone. 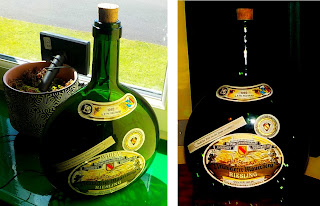 Occasionally, I buy a job lot at auction. The sphygnomanometer (which I wanted) came with a presentation German wine bottle from 1982 (which I didn't). What to do with it? I'd recently created a solar patio light from a vintage barometer case, for my sister's birthday, which I was rather proud of. I wondered if I could do something similar with the bottle. I'm still working on the light distribution, but here is the work in progress. I shall sign and date it SPD #2 '22. For who knows what will become collectable in the future? One thing is for certain: anything signed and dated by the creator of the piece stands a chance!

This has been by way of an introduction. Future posts are likely to be more specific, dealing with periods of history linked to specific items. I hope that you enjoy them and find them as interesting as I do. Researching the history of things has been truly fascinating.