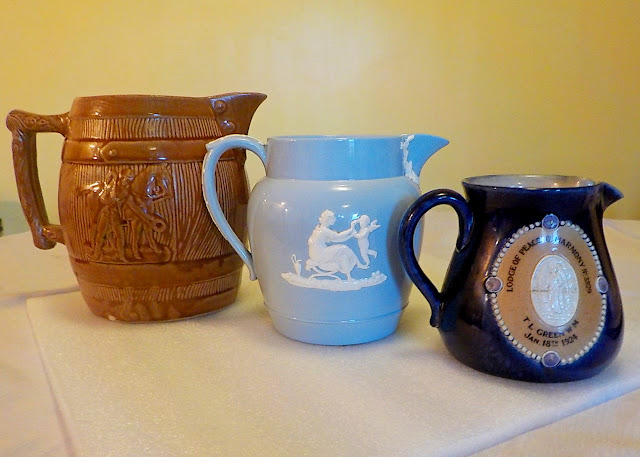 The humble jug, a vessel for holding, and pouring, liquids has been with us for millennia. We humans have been firing ceramics for about 31,000 years. The word 'jug' is far more recent. Webster's Dictionary dates it to 1530-1540 and both Webster's and Collins suggest that it derives from the pet name given to women named Joan in the sixteenth century.

I've got three jugs for you to look at today, which gives us another chance to play basic, better, best. Look at the jugs, read the descriptions, then rank them in order of value from lowest to highest. I'll give you the answer at the end. 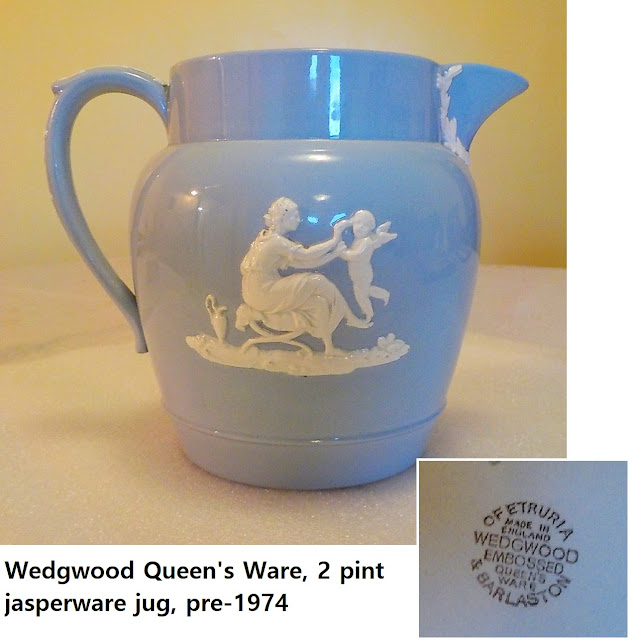 If you are regular readers of this series, then you'll immediately recognise this as Jasperware which we discussed in episode 4. This is genuine Wedgwood jasperware, and confusingly marked Queen's Ware on the base. Jasperware is the style, Queen's Ware is the brand. As always, the marks on the base can often give a clue as to the date an item was made. Queen's Ware started in 1940 and continues to this day. However, in 1974 a superscript ® was added to Wedgwood to denote that it was a registered trade mark. This one hasn't got one, so we know that it was manufactured pre-1974, which makes it at least 49 years old, and therefore, I would describe it as retro. Others may describe it as vintage. As I said in the Introduction to this series, apart from antique (100+ years old), other terms are somewhat loose. 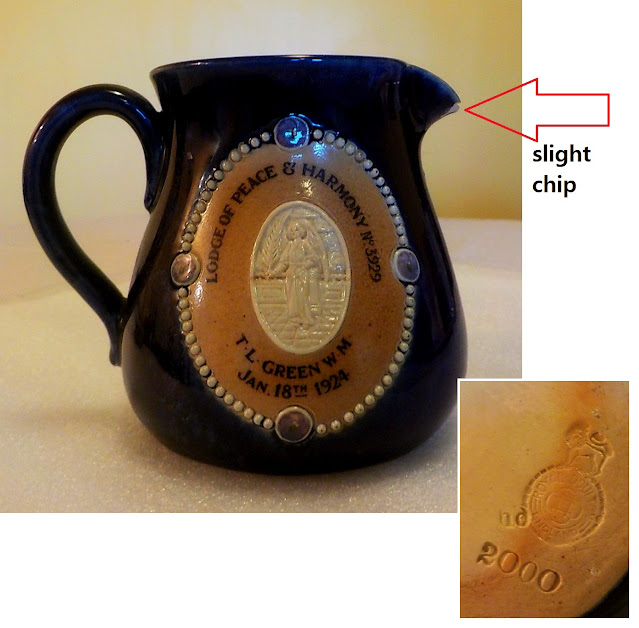 This is an interesting little jug. The words 'Lodge of Peace & Harmony No. 3929' obviously denote it as a Masonic jug, the name T.L.Green W M (Worshipful Master) and the date Jan 18th 1924 probably indicates that these were made to commemorate his accession to the post. I say 'these' because this is not the only one in existence. Anyhow, we know it was made after Jan 18th 1924 and presumably in that year. Back to the base marks again. We have Royal Doulton England in a roundel, with four interlocking Ds in the centre, and a lion standing on top of it. The lion, the crown and the roundel is the famous Royal Doulton mark, but hang on, where's the crown? After 1922, there was a short period when the crown was omitted and this piece falls into that period and confirms it (almost) as an antique – only a couple of years to go! One should note that there is a slight chip under the lip. 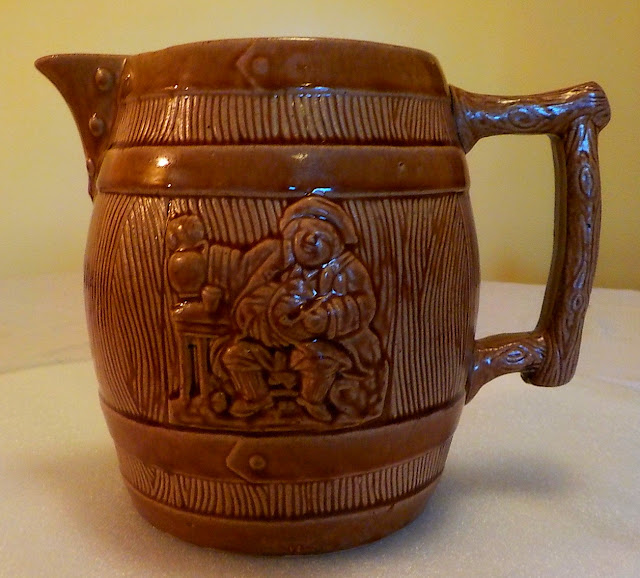 I don't know why, but this one is my favourite. It's big, and solid, and heavy, and useful for watering my indoor plants. I may just hang on to it. One side shows a rotund gentleman, drinking in a tavern, and on the reverse there's a man with a horse. It all feels rather Bavarian. As far as I can see, there are no markings on it whatsoever.

So, what do you reckon? I expect most of you decided that the unmarked big brown jug was the basic, and you'd be right. It's a nice big functional jug, but that's all you can say about it. Probably retro, judging by the style, and I'm putting it up for £19 including free UK delivery.

Deciding between the other two is maybe not quite so easy. Wedgwood and Royal Doulton are both famous names. The Royal Doulton is some 50 years older, but has a chip, whereas the Wedgwood is in perfect condition. It all comes down to rarity value. The Queen's Ware jug isn't particularly common, but not particularly rare either. You can find them on the internet for £35-45. I'm putting mine up at £39 including free UK delivery.

The Royal Doulton Masonic Jug, on the other hand, is a rarity. All 1920s Royal Doulton, with the base mark without the crown, is highly sought after by collectors. I shall be putting this one up for auction. An identical one to this, albeit minus the chip, sold in 2013 for just over £200. I'll be happy with half that.

10% Off  the Queen's Ware and Big Brown Jug, exclusively for readers of this blog. Use this link