After last week’s stroll through the village of Agios Ioannis I thought we'd walk down the road for a bit and then cut across into the valley below where there’s an old olive press that I’ve long wanted to prowl around. But first, here growing wild at the side of the road is a magnificent straggling clematis climbing the rocks.

Obviously, like anemones and delphiniums, it’s a type of buttercup. No, I haven’t finally taken leave of my senses they are all part of the Buttercup family, the Ranunculaceae. But how can such wildly different looking plants all be closely related? It all comes down to plant systematics, the biological classification of plants. A couple of hundred years before Christ was born, a wandering Greek philosopher called Theophrastus started us off by grouping plants loosely into trees, shrubs and herbs. Another Greek, Dioscorides who was a medic in the Roman army, refined this a few hundred years later when he classified over five hundred plants according to their medicinal properties and this became the standard reference work right up until the sixteenth century. Classifying plants by their similarities in structure then took over culminating in Linnaeus publishing his Species Plantarum in 1753 (he dwelt on their sexual organ arrangements but then, he didn’t get out much). Darwin’s publication On the Origin of Species in 1859 pushed us towards classifying plants based upon their evolutionary relationships and nowadays we use DNA analysis to refine that concept in the science of cladistics (see Taxing Taxonomy and Confusing Cladistics) and that’s why clematis is a type of buttercup – they share a common ancestry.

This little old church here, which was built into the rock about 120 years ago, is dedicated to St. Antony of the desert. I think that we could do no better than adopt him for our journey as he was a great one for going off into the wilderness which is what we’re about to do. He lived variously in a tomb, an abandoned Roman fort and at an oasis, fought demons in caves and had encounters with satyrs and centaurs. Which rather goes to prove that living on your own for too long isn’t necessarily a healthy option. However I expect he had the odd lizard for company which is maybe why this little Balkan Green lizard is basking outside his church. We're going to cut down left by those pines.

This is our wilderness and it used to be a garden by the looks of that remnant of a grape trellis. I see that the Painted Ladies are still with us (I believe that St. Antony was tempted by visions of those as well but not the butterfly variety) and dancing around the ground in amongst the foliage are a couple of Willow Warblers. These are winter visitors and rather similar to chiffchaffs but you can tell the difference by their little pinkish legs; the chiffchaffs are brown/black. Their call is slightly different too and if we stand still under the trellis and call to them they’ll probably call back. It’s a sort of low who-whit whistle (as opposed to the chiffchaffs which is simply whit). Are you ready? Right, whistle. who-whit. There, they’re answering you. 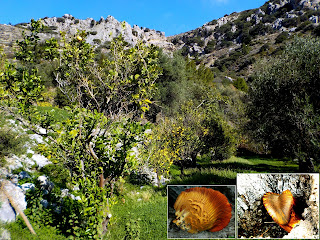 The garden isn’t as abandoned as it first seemed. This small citrus-cum-olive grove appears to be well tended. I wonder what delights it holds in store for us? I’ve found our first mushroom of the season. Here, growing in the roots of this olive tree. I think that it may be a False Chanterelle. The reason I say ‘I think’ is that it’s not easy to tell a False Chanterelle, which at best is inedible and at worst mildly poisonous, from a true Chanterelle which is delicious. An experienced forager may tell you that the edible one has an apricot smell – not helpful if you’re slightly anosmic like me - and a mycologist will tell you that the true Chanterelle has primitive gills which is great if you’re an expert on gill structures. Add to this that the poisonous Jack O’lantern looks pretty much the same as both of them and grows in the same type of habitat and you have a recipe for disaster; quite literally if you’re thinking of cooking them. This specimen is also rather old so we’ll have to leave it with a question mark as to what it is.

Finally we’ve reached the old olive press. It’s rather overgrown with newly emerging giant fennel but I think that we can get in and poke about. Beware of falling masonry. These are out of the ordinary, look up here in the corner. These are the nests of Mud Dauber Wasps and this is the mud that they’ve daubed to create their nurseries. Each cell will hold one larva which will be provisioned, quite often with one of those Cellar Spiders that we found last week. We’ve met these wasps before of course (see Only Connect...A Quiz ) but the nests themselves are interesting.  In Hoodoo magic (not Voodoo) which is practised in the American deep south these nests are collected, powdered down and mixed with other ingredients and used in a variety of spells. Most of these seem to have to do with keeping people coming back be they errant husbands or business customers.

Well, there’s a nice bit of magic to finish the day. The next part of journey seems to take us through the olive groves that once supplied this press and after that I suspect that we’ll be back in the wilderness. See you next week. 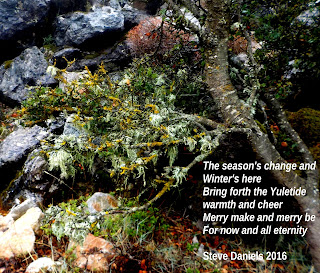 Here’s a fascinating article on the use of mud dauber nests in Hoodoo magic: A Multipurpose Zoological Curio …
…and another on Chanterelles: How to tell a real Chanterelle

It is that time of year when we’re all celebrating some sort of winter festival so whether yours is Christmas, the Winter Solstice, Hanukkah, Pancha Ganapati or one of your own devising may I wish you a very happy one. Merry Whatever, love Steve x.