We are nearly at the end of our journey down the Milonas Valley but before we reach the point where the little river enters the sea I want to take a slight detour to a small, fallow field nearby because it sums up this season of spring so succinctly. In this one field I counted twenty different wild flowers when I chanced upon it the other day so let us wander among the crown daisies and the poppies and watch spring in action.

This is no quiet landscape; a veritable orchestra of insects are chirruping, buzzing and droning as they go about their business of collecting from the flowers, pollinating as they go. The deep bass notes of the Buff-tailed Bumblebee down in this Common Poppy are counterpointed by the Honey Bees investigating the Yellow Asphodels around the edges of the field.

The beetles too are adding a further layer to the symphony. All our old friends are here; the Soldier Beetles, the Flower Chafers and the carpet Beetles but who are these small fellows hiding in the folds of the Mallows? Some tiny little Flower Weevils and not all fellows it would appear. There is definitely some action going on here that you wouldn’t expect of the Royal Philharmonic (not during a concert at any rate).

I think we’ll take our lead from this Pale Shoulder moth and laze awhile on these soft beds of Spurrey. The larvae of the Pale Shoulder feed on Goosefoots and Mallows among others and this field hosts plenty of both so it’s no surprise to find it here. No great wonder to find so much Spurrey either as it is a very salt tolerant plant and we’re very close to the sea. You know, I could lay here in the spring sunshine for hours just listening and watching but there are so many intriguing sights, scents and sounds that are just crying out to be investigated. Let us move on.

Where you have insects you have predators of course and here among the stones at the edge of the fields the lizards are lurking ready to snap at any unwary insect that comes too close. Just stop and listen for a while: overlaying the rhythmic background of the insects you can hear the intertwined melodies of the songbirds in the olive groves that surround us. The trilling piccolos of the finches, the percussive rattling song of the Sardinian warbler and the beautiful flute solo of the Blackbird. Spring is indeed the most wonderful of seasons. 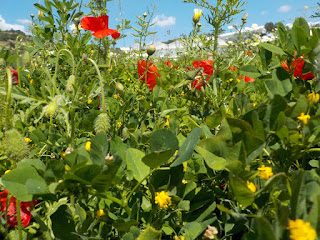 Spring has definitely sprung; the flowers are blooming, the insects are pollinating and the birds are singing for mates in the trees. But what if spring never sprung?* Or leastways, if it failed to spring in the manner to which we’ve become accustomed? Unfortunately this is happening right now. From my own notes I know that the rainfall patterns have shifted forward by a month in the last ten years, the Crown Daisies that used to start flowering in November/December are now rarely seen before January and the insects aren’t always keeping pace with the changes. That Pale Shoulder moth was one of the few noctuid moths that I’ve seen this winter whereas ten years ago I was photographing species by the score. Worldwide the climate is changing. Of that there is no doubt and arguing about whether we are to blame or whether it is part of a natural cycle is pointless now. If the flowers, insects and birds go out of synchronisation (and evidence shows that they are) then our agriculture also slips out of gear. We are going to have to adapt to survive. Sure we can do it, by cobbling together artificial solutions to crises as they arrive, but days like this will be lost.  The Mayans, Romans and Ancient Egyptians have shown us that civilisations don’t last forever and western civilisation as we now know it is in for an interesting century.