Once More Onto The Beach, Dear Friends 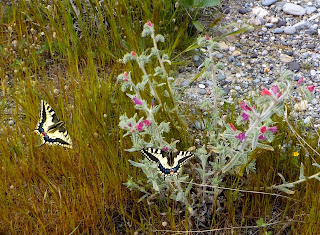 Back in the middle of November last year we began our Descent into the Milonas Valley and here we are in the middle of April rapidly approaching the sea. Back then we were accompanied by Red Admiral and Painted Lady butterflies and now the Old World Swallowtails have joined us. I saw the first ones at the end of March and like the poppies that we saw last week they are now appearing about a month later than in 2006. A similar trend can be seen with the first swallows although the swifts are much the same as they were then. Only the vine leaves seem to be bucking the trend; they are now appearing about a month earlier. As we were discussing last week, the seasons are going out of synch. 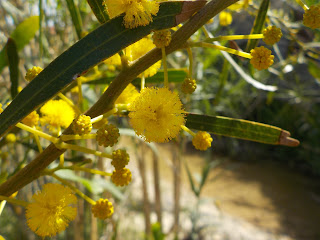 No matter, we will enjoy the spring while there is still a spring to be enjoyed and I see that the Silver Wattle is now bursting into golden globes of flower. This shrubby tree, which is also known as Mimosa, was originally a native of Australia but has been widely introduced into the Mediterranean and is pretty well naturalised here in Crete. Apparently these are traditionally given on International Women’s Day in Italy and a few other European countries. Seeing as that was on March 8th I can only presume that it flowers earlier up there – or it did when the tradition began. 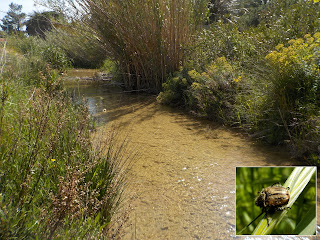 The stream is now placidly flowing between banks of vegetation: great tall reeds and the pungent tree spurge are on the opposite bank while over here straggly asters are poking through the lesser reeds and grasses. I see that we have a flower chafer taking a rest in the sun on this one. These are big, bumbling beetles which emerge in considerable numbers in the spring months and give rise to various stories in folklore. Their relatives are known as May bugs or June beetles in the UK. 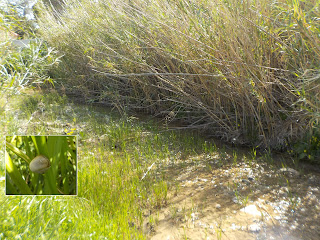 Here’s an interesting little critter; it’s a Grove Snail and the interesting thing about these are that they come in many guises, from pale and almost unmarked like this one to bright yellow with chocolate bands. The one thing that they all have in common is the brown, slightly protuberant lip at the base of the shell. Snails with different patterns are called ‘morphs’ (having more than one appearance in nature is known as polymorphism) and which morph is prevalent in an area is determined partly by the genetic make-up and partly down to the preferences of their predators (who tend to go for the commonest morph as being tried and tested as it were). 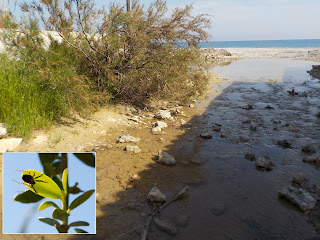 Here we are at the end of the vegetation; a sprawling tamarisk and then the beach. There’s also a lentisc bush with a nice orb web stretched across it and the architect has just spotted us. It has run along the top anchor line and taken refuge under a leaf. You may wonder how they get that first anchor line, which may be metres long, into place. The answer, as Bob Dylan observed, is blowin’ in the wind. The spider produces a very thin line of silk and just lets it drift. When it snags on a distant piece of vegetation the spider feels the vibrations and reels it in until it’s taut. It then runs back and forth along the line, like a demented tightrope walker, laying strengthening lines until it has a cable strong enough to support the rest of the web (the construction of which we discussed in The Incredible Shrinking Safari). 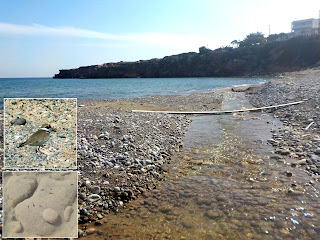 And so we reach the end of the Milonas Valley having followed the stream from its origins in the Thriptis mountains all the way down here to Ferma Bay. Would you believe it? Even down here on the beach we still have tadpoes. I don’t give much for their chances of survival but toads are r-strategists like last week’s kestrel and produce far more offspring than could ever hope to survive. Might make a nice lunch for that Little Ringed Plover though. Talking of lunch there’s a nice little taverna by the beach - a drop of ouzo and a few mezedes would go down a treat in the spring sunshine.