Sklavoi – Village of the Slaves 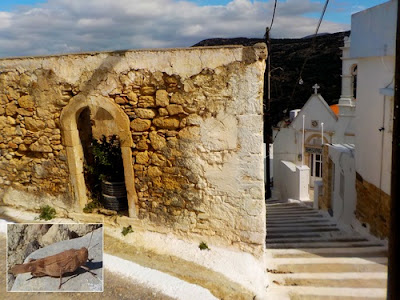 When you look at a map of an area there are often a number of exciting looking places to investigate but at first glance Sklavoi does not appear to be one of them. Which is why I want to go there for I often find the most interesting things where they are least expected. For instance the connection between this little church down here, grasshoppers and the bomb disposal squad. The church is dedicated to St. Barbara, a young lady of Christian persuasion who's father was an out and out pagan. When he learnt of her conversion he went at her with a sword whereupon the wall of the tower (in which he kept her) exploded. Babs finished up, unharmed, in a mountain gorge alongside two very surprised shepherds. Her father pursued her, one of the shepherds betrayed her and he was turned to stone for his treachery. Not only that, his entire flock was turned into grasshoppers (which seems to have been quite popular in the past – see Chrysopigi - Source of Gold). She was caught and tortured and about to be beheaded by her father as a final punishment when he too was detonated by a bolt of lightning and Barbara escaped. In honour of her going out with a bang as it were, she is now the patron saint of all those who work with explosives. 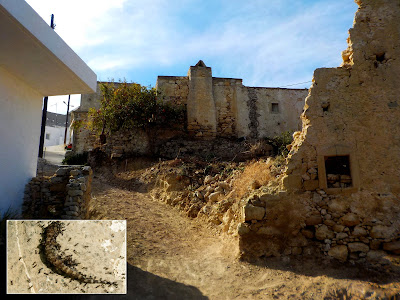 I am also intrigued by the village name for Sklavoi is Greek for slaves and Crete was never big on slavery. What slaves there were seem to have been reasonably well treated and it was here in Crete that the tradition of the 'servants-day-off' where the slaves were waited upon by their masters probably first originated [1]. We are not the only animals to indulge in a bit of slavery. These ants down here are workers busy dismembering a dead gecko. These particular ants were born in the colony but the Blood Red Ant of Northern Europe, the U.S. And Asia will raid the nests of other ants and kidnap the pupae and larvae and enslave them. I sometimes wonder if we humans were ever the first to do anything. 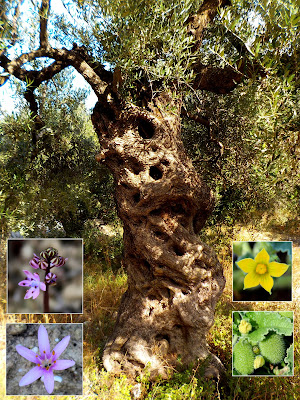 Let's wander down out of the village and see if we can find any autumn flowers. Quite a variety in the environs of this magnificently twisted old olive tree. Quick quiz: look closely and see if you can spot the odd one out. Did you spot the little Mirid Bug peering over the edge of the right hand petal of the yellow Squirting Cucumber? How about the Southern Green Shieldbug nymph nestling between its fruits below? Or the pair of beetles investigating the centre of the Autumn Crocus to the left? A little Autumn rain, the flowers come out, the insects appear and nature's larder is re-stocked once more. The only one without an entomological attendant appears to be the budding Autumn Squill. 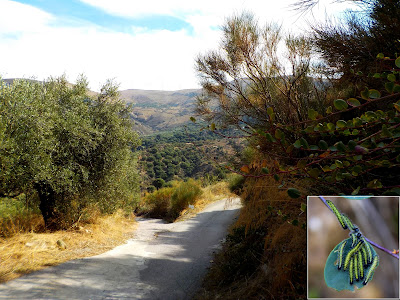 This really is a delightful little stroll and beautifully warm for the time of year and I see that we have caper bushes in great abundance. I still haven't tried pickling the leaves as they do in Italy but the little flower buds are delicious on a bit of fish or a pizza. Seems like I'm not the only one who likes capers. A brood of caterpillars. These are Large Whites. Traditionally they are associated with cabbages or other brassicas but although their preferred food plants do indeed tend to be members of the Brassicacae family they have quite a range of host plants from different families. 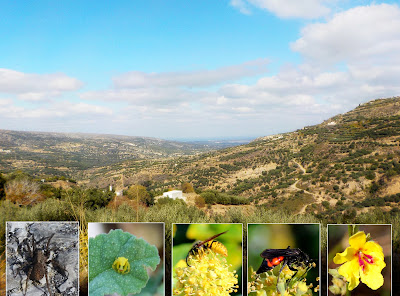 What a wealth of life we have along the roadside here. I told you that Sklavoi would be interesting. Down on the road we have another of those Huntsman Spiders that we found up in Praesos and sitting on a leaf a little Crab Spider that's recently migrated from a yellow flower and hasn't got round to changing colour yet. Plenty of wasps around the ivy flowers, mainly the common European Wasps which the Americans call Yellowjackets, but also this red and black one which is a Spider Wasp. The adults feed on nectar but their young dine on live spiders. When the female lays an egg she'll seal a spider in with it that she's previously paralysed with her venom. The spider has to be large enough to feed the youngster until he's large enough to fend for himself so the little Crab Spider is probably safe but I'd advise the Huntsman to keep at least one of his eight eyes on the sky above him. And finally... one of those tall plants with small flowers that may be overlooked. Pity really because their flowers are quite charming and the plant, which is a Verbascum or Mullein, contains high levels of Rotenone which we use to treat head lice and scabies. Apparently the US government also uses it to kill fish in rivers but why they should wish to do this is beyond me.

This little track seems to lead back up into the village so that will make a nice circular walk. 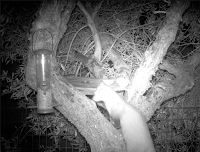 So far on the bird table we've had birds, cats and a black rat but this is one animal that I was rather surprised to see, especially as the bird table is only four feet from my bedroom window. It's an endemic Cretan Stone Marten which lives only here and on a few islands in the eastern Mediterranean. It is slightly smaller than the European Stone (or Beech) Marten of which it is a subspecies. It's not totally unusual to find them around human habitation at night but even so, four feet is quite close. I'm taking it as the ultimate proof that I do not snore like a chainsaw (whatever Christina might say).