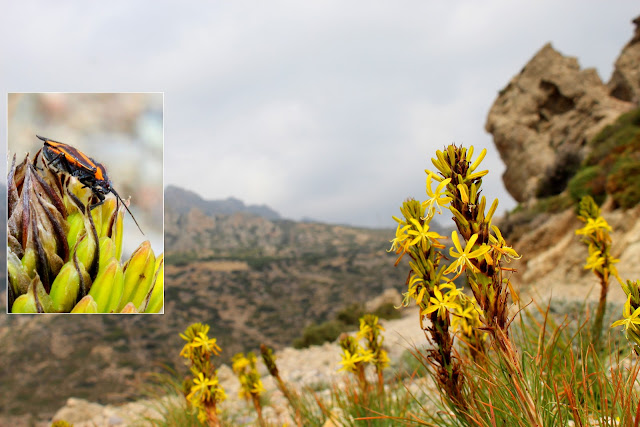 Here we are on the final segment of our walk around the Forty Saints and if you cast your mind back to the beginning you may recall that we saw some little Mirid Bug nymphs on some Asphodel leaves. I hazarded a guess that they may have been the young of the Orange Blossom Bug, Dionconotus neglectus, as we'd seen the adults before on Yellow Asphodels when we visited The Chamomile Lawn. However, it seems as though we have another contender because if you look closely, these Yellow Asphodels are being visited by another type of Mirid Biug, Horistus infuscatus. But what does it matter which bugs visit which plants? Simply, plants and their attendant insects move around over time as conditions on the planet change. They are climate refugees in a sense and by monitoring the direction of their migrations it helps us to predict where our future climate refugees will go as Earth temperatures continue to rise. The plants, the bugs and us all react to environmental changes in much the same way. 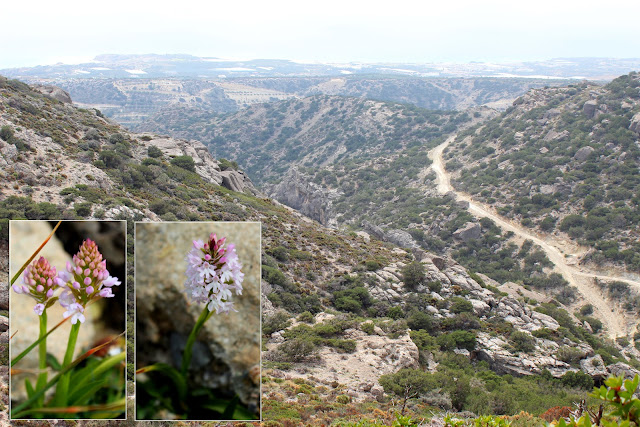 Now, who's for a nice hot mug of saloop? If you'd have lived in England in the 18th century you'd have kown exactly what I was talking about because this was what was sold on the streets before Starbucks and Costa or even Ye Olde British Tea Shoppe dominated the High Street. It was made from the ground up bulbs of certain orchid species such as this Pyramidal Orchid, Anacamptis pyrimidalis, down at our feet here. As it takes between one and four thousand tubers to make a kilo of orchid flour, or salep, this is rather taking its toll on the orchid population as it is still widely used, particularly in Turkey but also in Greece1. 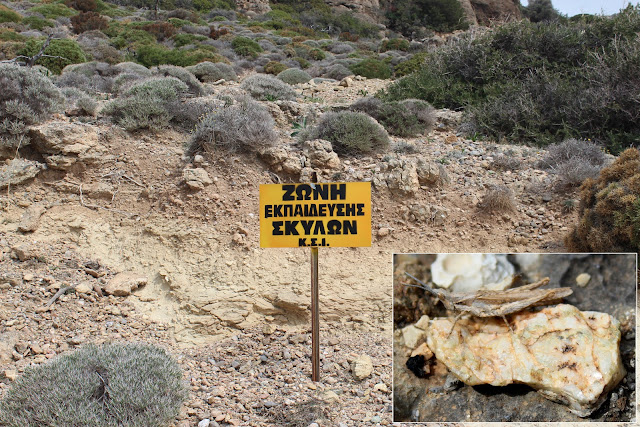 You may have noticed these yellow signs during our perigrinations around the Cretan countryside. They are warning you that this is an official dog training zone - in other words; if you're molested by an unruly dog you can't take the owner to court (not successfully at any rate). So far I've never had a problem with an overenthusiastic hunting dog nor an overenthusiastic and trigger-happy hunter for that matter. Meanwhile, sitting on this piece of milky quartz we have a totally misnamed Gaudy Grasshopper. This particular one, Pyrgomorpha conica, couldn't be more camouflaged if he tried but some of the pyrgomorphs have very bright, warning colouration. Hence the group name. 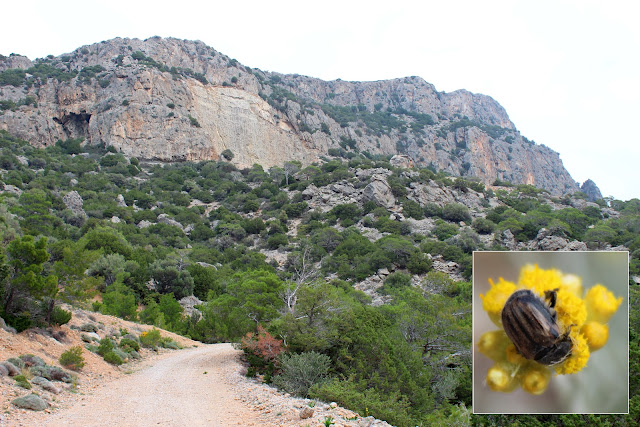 We've nearly come full circle now and the path is lined with so called 'everlasting' flowers. They're very popular with flower arrangers because their colours hold for a long while after they've been cut. They're pretty popular with this cockchafer too who's having a good old feed on this one. Strange word, cockchafer. The chafer bit is late middle English meaning to rub abrasively, but against what I wonder? Cock, in this sense just means large or vigorous (sorry, you were thinking what?) so we're left with a large or vigorous abrasive rubber. As I say, a strange word. 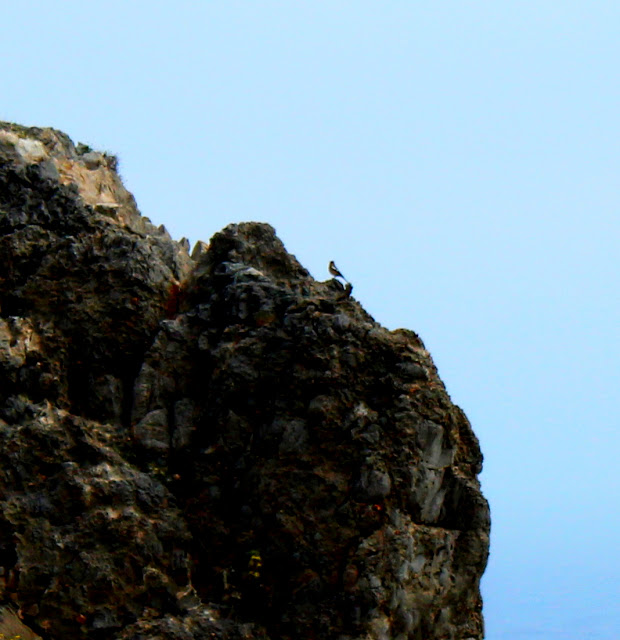 And so we arrive back where we started and we're being sung home by a little chaffinch up on the rock. These are probably our most dedicated of song birds repeating their short phrase up to six thousand times a day. Back in Victorian England singing matches were held between cock birds, the winner being the one who sang his song the most times in a specified period. I was going to point out that there was no television in those days so people had to devise their own entertainment but given the state of British TV today with Bake-offs, Sewing Bees, and Pottery Throws then I wouldn't be surprised if The Great Chaffinch Sing-off wasn't already in the pipeline.

1 Eaten to Extinction by Stephanie Pain

Although we have been all around the Forty Saints I am still hoping that we can have one last trip up on the top. However Mrs D is still requiring a lot of nursing and, as recovery is a long term process, I'm not sure when that will be. Stay in touch through Facebook, Twitter or by following the blog. All the best for now,
Steve