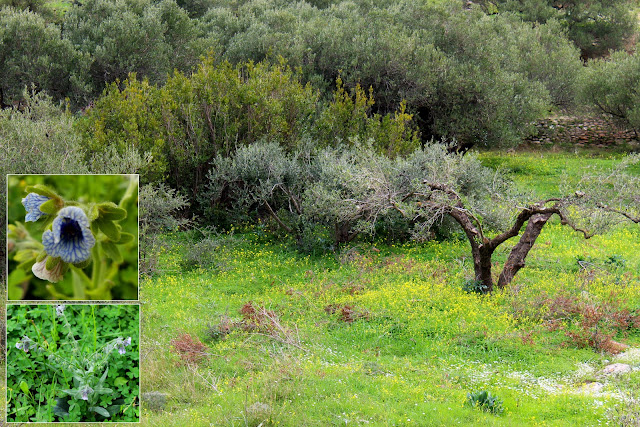 In last week's Almanack I introduced you to Borage, one of the hairy guys in the family Boraginaceae. The name derives fro the Latin for hairy or woolly and their stems and leaves are covered in the stuff. This particular one is Cynoglossum creticum or Blue Hound's Tongue which is native to the Mediterranean basin and not just Crete as its scientific name suggests and the leaves do indeed look a bit like hound's tongue. Some of the chemicals in this are not particularly good for us or our livestock but caterpillars of some butterflies use it to harvest and store chemical defence weaponry whereas some female moths find it an alluring addition to their pheromonal perfume. One man's meat is another man's poison as the saying goes. 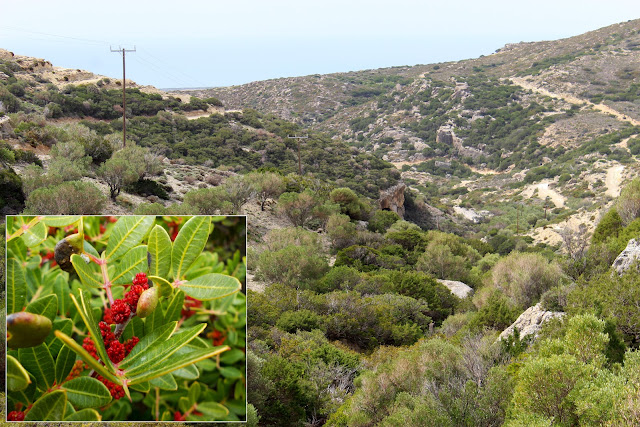 Look Mum, I can see the sea! We've now come around the far side of Agioi Saranta, or the Forty Saints and we're going to head down towards that deep ravine before cutting back around the hill. The air down here is absolutely redolent with a sweet, almost blancmange like smell which is being produced by the tiny red flowers of these mastic bushes. The lumpy bits in among the leaves and flowers are the nurseries of the little Woolly Aphid, Aploneura lentisci, which we met and put under the microscope last year in the Milonas valley (see A Recipe For Life). 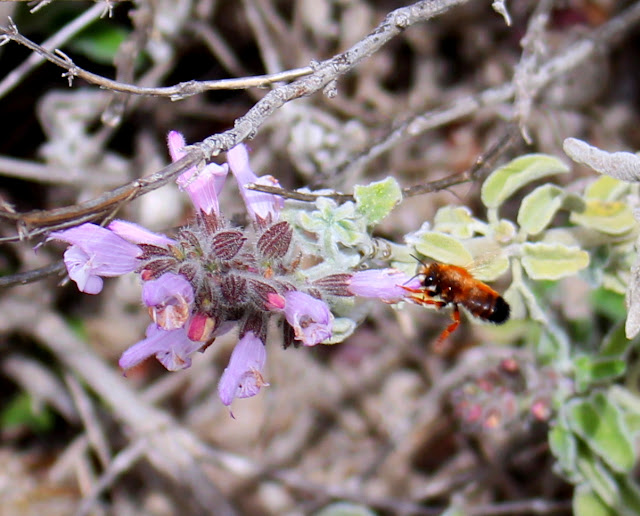 This is getting to be quite an olfactory outing as the musky scent of Greek sage is now beginning to pervade our nostrils. These orange and black bees are enjoying it too. Most of us are familiar with Honey Bees and Bumble Bees and we met a Mining Bee when we were up on The Orchid Hills but this one is a Leaf-cutter Bee, Megachile sicula, which gets its common name from its habit of neatly cutting up leaves or petals with which to build its nest. Like the Mining Bee, it is a solitary bee rather than a social insect and the female builds her nest alone. 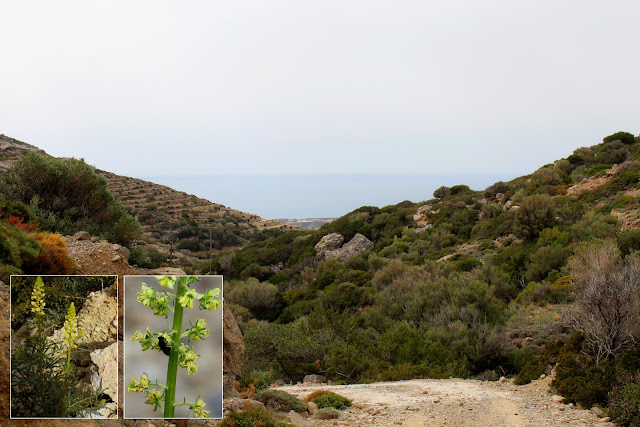 Here's a wayside plant with a bit of history as well as a pleasant aroma. It's called Yellow Mignonette, Reseda lutea, and like its close relative, Dyer's Weld, its roots have been used to produce a yellow dye for about three thousand years. Small flowers attract small pollinators and here we have yet another, somewhat diminutive , bee of the Halictidae family. These are social bees (technically euscocial but we won't go into that now) with a queen, workers and drones and so on that build a communal nest, usually in the ground and they are generally know as Sweat Bees as they are attracted to our perspiration. Hope you remembered the deodorant this morning because although their stings are very minor if you find yourself walking through a cloud of them the cumulative effect can be most irritating. Fortunately there only seem to be a few about this morning. 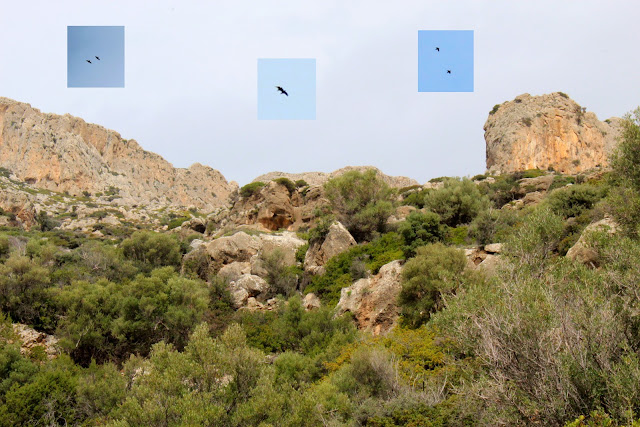 That's enough bee-haviour for the moment as I can hear the sonorous cronks of Huginn and Muninn behind us so let's look back and see what they are up to. They would appear to be courting; flying around in tandem, almost wing to wing at times. Ravens start courting at a young age but it may take two or three years before they settle down to nest building after which they will stay together for life. Sort of like a long engagement before getting married and settling down. We'll continue to keep an eye on them while we're up here and see if we can spot them carrying nesting material this year. Meanwhile we have a choice of down into the depths on our right or up to our left. We'll leave the depths for another expedition and continue our circumnavigation of Agioi Saranta next time.

Sorry the blogs are a bit erratic at present but life is playing silly bugs at the moment. Hope to publish next week. Meanwhile the novel “The Magic of Nature/The Nature of Magic” has had a sniff of interest from a publisher in the UK. Nothing definite yet but if you'd like me to drop you a line when the deal is done just email me at steves.summer.book@gmail.com and type “yes please”.