Yes, the autumn equinox is nearly upon us and it's time for me to stop loafing around and take you trundling off around the natural beauties of east Crete once more. Only this time you really can come with me. Series 8 is called Steve's Sunday Strolls and I'll be giving you a couple of weeks notice of where I'll be at 11am on Sunday morning and you can either join me or avoid me, as is your wont. For instance, on Sunday 23rd of September I shall be here in Sisi. 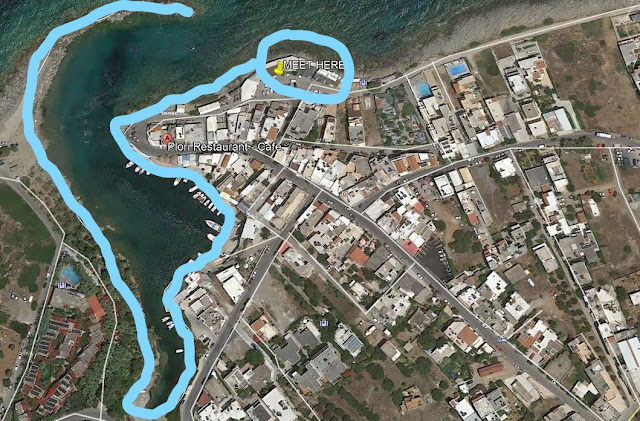 We'll do a bit of rock pooling along the front and see if we can find some Dice snakes (don't worry, they're not dangerous). Then we'll go around the harbour and explore the inlet and the woods along the far side and finally, if time allows, we'll see if there are any nice birdies out on the spit. Then it's back to the Plori Restaurant-Cafe where we can chat about what we've seen and I'll try and identify anything that you've photographed and tell you a bit about it.

So, bring yourselves, bring a camera, and maybe even a swimming costume and snorkel as we may have a quick dip after our lunch has settled. 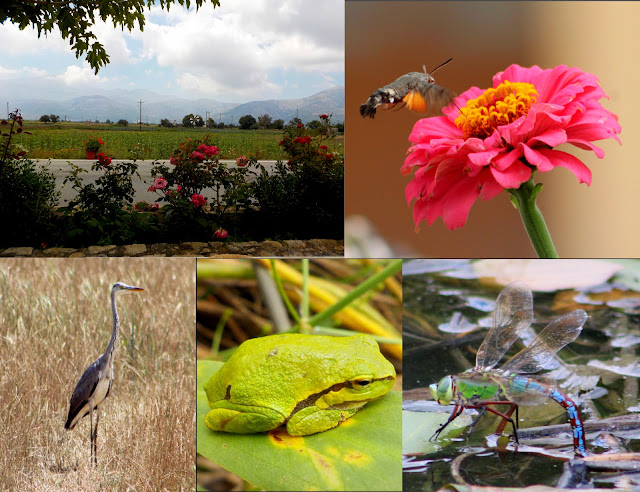 I haven't been aestivating completely over the summer months. Steve Lenton (our botanist friend) and I took a trip up on to The Lassithi Plateau where we found a delightful array of wildlife including the amazing Humming Bird Hawk Moth, Macroglossum stellatarum; Grey Heron, Ardea cinera, on the prowl for amphibians such as the European Tree Frog, Hyla arborea; and the female Emperor Dragonfly, Anax imperator, even found some water in the stream (reduced to occasional puddles in the height of summer) to lay some eggs. Incidentally, the Plathiani Lagkada Wildlife Refuge on the southern edge of the Lassithi Plateau will be the venue for our second Sunday Stroll on 30th September. 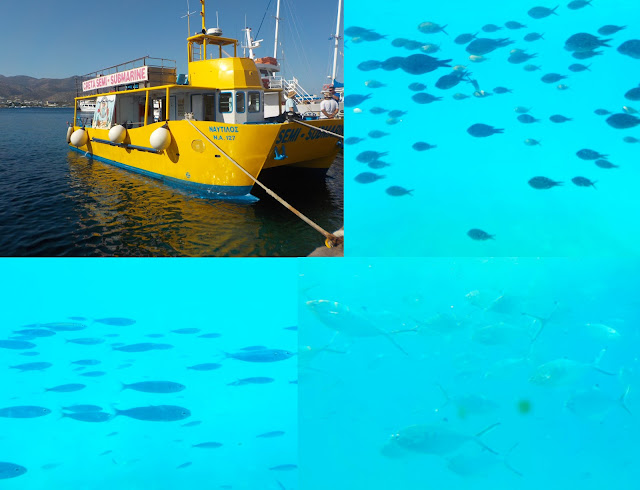 I have also been under the sea in a yellow submarine, or to be more accurate, the semi-submarine Nautilus operating out of Agios Nikolaos. Unfortunately we did not see any Loggerhead Turtles, Caretta caretta, but plenty of fish including shoals of Mediterranean Damselfish, Chromis chromis; Bogue, with the marvellous scientific name of Boops boops, and also a fair few Pompano, Trachinotus ovatus, a game fish of the Carangidae family. The undersea windows aren't clear enough for good photography but the human eye is better at adjusting to the mist and the views are quite clear.

I have also put together a book of short stories that I wrote back in the 1980s in which I take a light-hearted look at the human animal, Homo sapiens, in particular the female of the species and how, more often than not, they get the better of us males. One of the stories even has a nature theme and you can read it here for free: Mary and the Spider Man as well as all the necessary info on how to download it to your Kindle. (The paperback version will be available later this year).


That's just about it from me this week. Next week I shall post the Crete Nature Almanack for Autumn and after that we'll be into series 8 proper.

Don't forget the dates for your diary:

Upload your photos to https://www.inaturalist.org and help to catalogue the world's biodiversity.