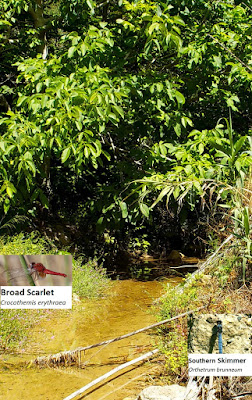 This week is National Insect Week in the UK and there’s loads of stuff going about saying how good insects are for us humans, but we’ve done all that, haven’t we? So, this week I thought I’d take you up to a remote valley, north of Achlia and we’d look for some lucky insects, that is, insects that are believed to bring good fortune.

As we’re starting our little expedition where the track fords a small stream let’s start by looking for Dragonflies. In many cultures, dragonflies represent good luck and prosperity. If one lands on you, you will hear good news from a close friend (but if you see a dead one, it will be sad news that you hear). If you catch one, you’ll marry within the year. This, I can confirm is not true – otherwise I’d be a polygamist! Here, on the banks of the stream, we have Broad Scarlets and Southern Skimmers, so we have a bag full of lucky points and good news on the way to start with. 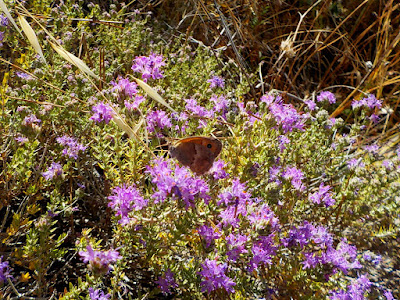 Hello, here’s our little friend from last week, the Cretan Small Heath. Butterflies are associated with the soul (the Greek goddess Psyche has butterfly wings) as well as life, death, and rebirth. In Ireland, the belief that white butterflies carried the souls of dead children was so strong that it was illegal to kill one in the 17th century. Elsewhere, specific colours mean different lucky outcomes: red for love, yellow for happiness, blue for serenity, green for prosperity. Orange butterflies, like this one tucking into the thyme, mean that joy is on the way. I dare say she’ll catch up with us later. 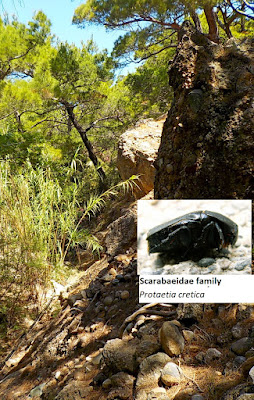 Now, who do we have at the base of this rock? A nice, heavily armoured beetle of the Scarabaeidae family. Not a particular harbinger of good fortune himself but in the same family as the Sacred Scarab of Egypt. The belief was, that Khepri, the god of the rising sun, renewed the sun each morning and rolled it across the sky until nightfall. The Sacred Scarab, being a dung beetle, was Khepri’s earthly representation, rolling his ball of dung along the sands. They also believed that new dung beetles hatched from the dung because the male mated with the dung ball and thus renewed life as Khepri renewed the sun. 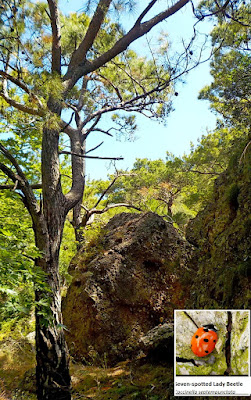 Another religious beetle is climbing this pine tree. It’s a 7-spot Lady Beetle. In English these are Ladybirds, in US English, Ladybugs. As they are neither birds nor bugs, we have now taken to referring to them as Lady Beetles, which is far more accurate. The ‘Lady’ part of the name is the religious bit. The lady in question being ‘Our Lady’ in Christianity, Mary, the mother of Jesus. It is associated with gifts; oil for Jesus, wine for Mary, and bread for the Holy Father and if you kill one you’ll anger Mary for nine days. This is highly believable, as any man will tell you who has forgotten to call in at the off-licence on the way home. Like many other Christian bits of trivia, this one was imported from an existing belief system. The Lady Beetle used to belong to the goddess Freya in Norse mythology. 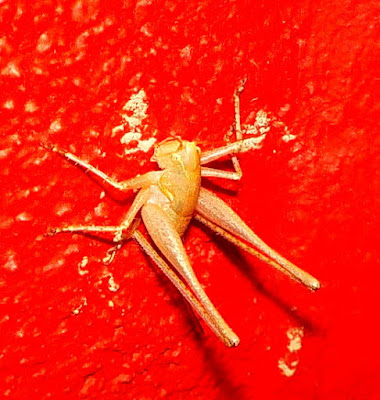 So, what led me into this whimsical foray into insect folklore? I woke up the other night to discover this cricket on the hearth. The idea that a cricket on the hearth brings good luck to the household spans many cultures. The origin of the belief is thought to be Chinese, as crickets were kept in cages as pets. If the cricket sang happily, all was well, but if it went silent then danger was approaching. Charles Dickens’ story The Cricket on the Hearth boosted the popularity of the legend in 19th century England, and Walt Disney did much the same in 20th century America with the character Jiminy Cricket in Pinnochio. Incidentally, Jiminy is a corruption of Gemini, used as an euphamism for Jesus, to avoid blasphemy, By Jiminy!

As I said at the beginning, this week is National Insect Week and you can find lots of interesting things to see and do here: https://www.nationalinsectweek.co.uk/

Ahem, there is also a rather useful book listed below which features 27 different types of insect plus a dozen or so other small creatures of the common or garden variety. People who have bought it tell me that it is fascinating and informative and has helped them to connect with nature in a whole new way. Not blowing my own trumpet.. just sayin’

If you have enjoyed this post, then please share it among your social media friends. Let’s give insects a boost in National Insect Week!