First Steps in a New Country 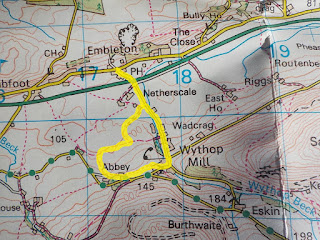 Having been locked down in Crete for three and a half months, I have finally made it to my new summer location, Cockermouth in Cumbria. So, welcome to the all new Crete & Cumbria Nature Blog, in which we’ll be comparing and contrasting the state of nature between southern and northern Europe. Although a lot of my time is being spent house hunting at the moment, I’m still managing to escape to the countryside, so join me if you will, as we take the local bus to the village of Embleton. 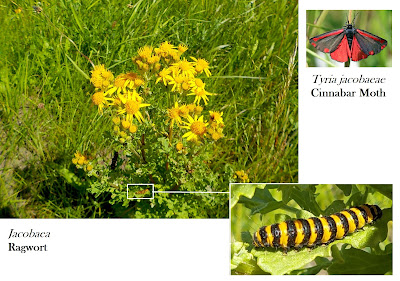 The bus has dropped us at a convenient wayside inn and we’ll start by following this lane down the hill, signposted Wythop Mill. This yellow roadside plant is Jacobaea [Ragwort], which spreads rapidly. In Europe, it has a natural control in Tyria jacobaeae [Cinnabar Moth], a brightly coloured day flying moth who’s larvae are voracious feeders. I can see at least three of the caterpillars on this plant. So hungry are these particular caterpillars, that if they run out of plant, they’re not above eating each other. They have been introduced into New Zealand, Australia and North America where Ragwort has become a problem. 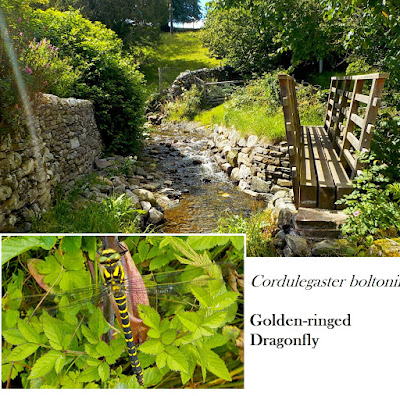 The third marked footpath on the right takes us over Wythop Beck and onto a bridleway heading in the direction of an abbey, according to the map. Where there is water, there are dragonflies (their larvae are aquatic). I thought that Anax imperator, [Emperor Dragonfly], that are common in Crete, were big at 78mm in length, but the females of this species, Cordulegaster boltonii, [Golden Ringed Dragonfly] can reach a whopping 84mm. This one doesn’t have an ovipositor (egg laying tube) on the back end, so it’s a male. Still very impressive though. 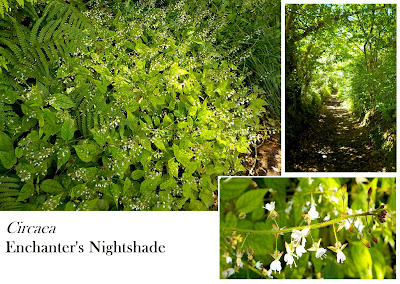 The bridleway is now delving between high banks of hawthorn, oak, blackberry and birch and down at root level, the shade loving plants grow. I’m going to stick my neck out here, as my familiarity with British plants has waned somewhat over the past sixteen years, but I think that this is Circaea [Enchanter’s Nightshade]. I want it to be, anyway, because the enchanter in question, after which the plant gets its scientific name, is the Greek goddess Circe. She was Helios, the sun god’s daughter, and had a tendency to get a bit stroppy. She was also a bit handy with the old magic potions as the Italian king, Picus, found out when he rejected her advances – she turned him into a woodpecker. She also turned all of Odysseus’ crew into swine, but whether that was because they all rejected her advances, I’m not sure. 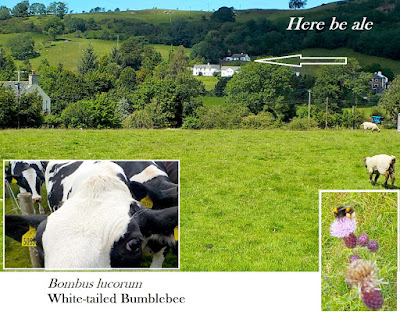 Out of the dark and into the light and the world of domestic livestock. Don’t worry about the cows, they won’t come too close. Oh, they have. Ignore them. What? Well, it’s your own fault, I’ve told you before: if you must go commando in the countryside, wear trousers. Scotsmen, what can you do with them? Meanwhile, back with the natural world, busy pollinating this thistle, is a Bombus lucorum [White-tailed Bumblebee] (or to be more accurate for the hymenopterists; a member of the B. lucorum complex). Now, we are particularly interested in Bumblebees at the moment because The Cumbria Wildlife Trust is counting them, and each time we photograph a bumblebee and upload it to the iNaturalist app. It is automatically included in the Get Cumbria Buzzing Project. For those outside Cumbria, other county wildlife trusts are available. This is one of the many citizen science projects you can enjoy getting involved with in the UK, but sadly, not yet in Crete. And if that doesn’t whet your whistle, I spy the pub over there where we can certainly do some serious wetting.

But first, a little bit of work. If I have read the map correctly, then we should come out onto the lane at the second footpath sign that we passed, where I happened to notice a whole bank of Chamerion angustiflorum [Rosebay Willow Herb], or Fireweed, as it is called in some parts of the world. Those of you who know me of old, know that I can never resist a bit of Fieldcraft & Foraging on our little expeditions, and today is no exception. We’re going to pick some flowers. The flower head is a bit like Dickens’ ghosts of Christmas; at the top you have flowers past, then flowers present, then flowers yet to come. We want to pinch the stem just below the bottommost flower and gently strip off the past and present flowers. We’ll leave the plants at the back for the insects to enjoy this afternoon and evening. We’ll collect a small bag and later, together with a few sprigs of peppermint that I found in that swampy bit about half an hour ago, we’ll take them over to Steve's Wild Kitchen and turn them into a yummy, and vitamin rich, dessert sauce that transforms simple vanilla ice cream into a dessert to die for. 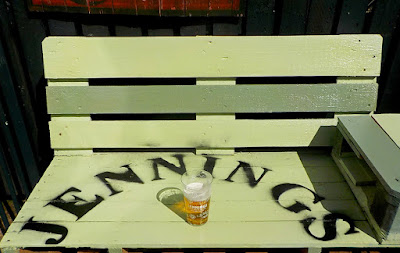 ut first, a beer. This is one point where Cumbria scores over Crete. Give me a pint of Jennings over a bottle of Mythos any day. On the other hand, Crete wins on coffee; an eliniko metreo being worlds apart from the faux Italiano served in the UK. Here in Cumbria, one can buy sliced bacon that you can’t actually see through but you can’t find a pitta gyros stand for love nor money. In other words, by dividing our time between Crete and Cumbria we have the best of both worlds. At the moment, Crete would be a better option as you could guarantee the taverna being open.  Never mind, it’s only a six minute bus ride back into town and there’s always a welcome to be had at The Bush.

Apologies, the link to Steve's Wild Kitchen has hit a technical glitch. I'll try to sort it, but please call back later if you want the recipe for a sublime summer dessert. All the best, Steve.