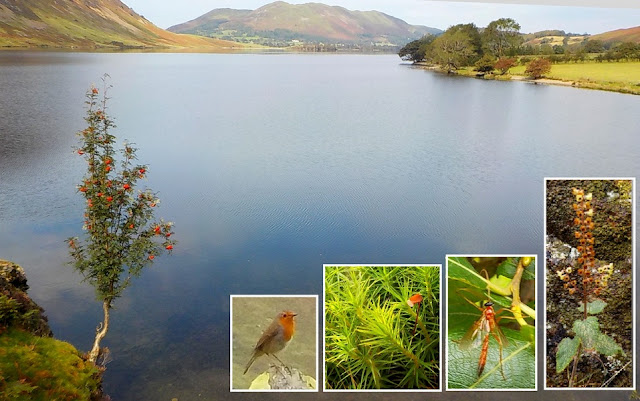 As we are in the Lake District, it’s high time that we visited one of these overgrown puddles to see what all the fuss is about. About 8 miles to the south of Cockermouth lies Crummock Water, and it is there that we shall take a stroll to Hause Point [pronounced Haw’s], one of the lower promontories which won’t tax the leg muscles too much. It’s a beautiful day, so let’s see what we can find. 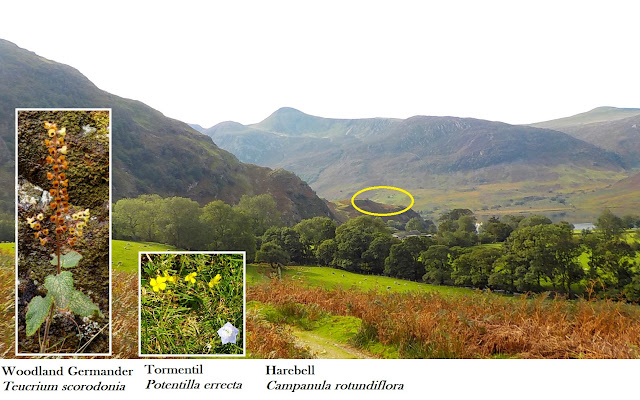 We’ll start by walking towards the back of this block of rock, known as Rannerdale Knots, then follow a beck down towards the lake, before finishing up on that little hillock in the middle distance. There are a couple of very common flowers that you’ll see all over the place at the moment: Tormentil, the little yellow one with 4 petals in the shape of a cross; and Harebell, the blue droopy, bell shaped one. The tall job, with the yellow flowers drying to brown is Woodland Germander, sometimes known as Wood Sage. Don’t bother picking the leaves, it’s a totally different plant to the sage in the kitchen. Same family, but that’s as far as it goes. 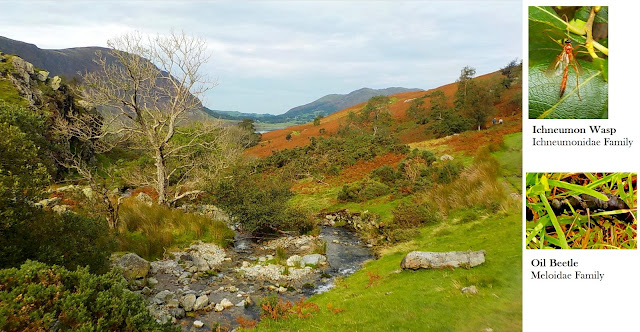 This is Squat Beck, looking like it’s posing for a calender, and dancing about in that Willow tree that we just passed was an Ichneumon Wasp. These really are good guys as far as the human race is concerned. They lay their eggs in other insects, such as the beetles that infest the crops that we grow to eat. The big problem is that we don’t know how many types there are, or which ones control which harmful crop pests. If we did, we could manage our farms to encourage the right Ichneumons in as pest controllers, and not have to spray the crops with goodness knows what. The world needs more biologists and less financial analysts. Enough soap-boxing, I’ve just spotted an Oil Beetle scurrying into the grass. They’re called oil beetles because they release tiny droplets of oil, which can burn the skin, if you pick them up. They aren’t so useful to us, as in the larval stage they attach themselves to bees and eat the bee’s offspring. Now, if we knew which ichneumon fly attacked the oil beetle that attacked the honey bee… the world definitely needs more biologists. 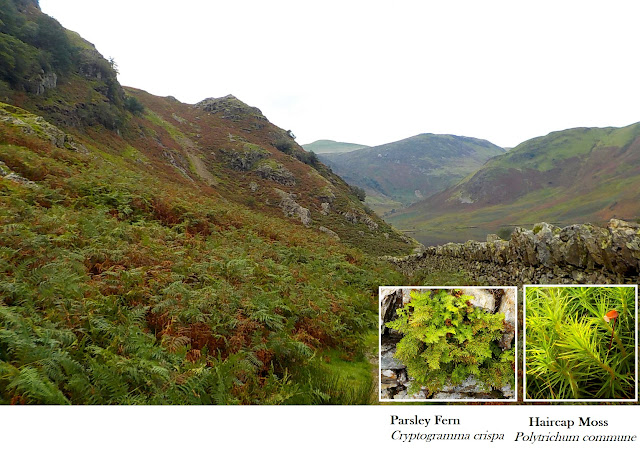 There’s Hause Point, up there to our left, but we’ll go round and take the easy way up. We often chat about flowers on our walks, but before flowering plants came into existence, about 140 million years ago, ferns had already been about for a couple of hundred million years and mosses probably about a hundred million years before that. They really are successful organisms. This one, growing in the wall, is a Parsley Fern, because its fronds look like parsley leaves, and this, at the base of the wall is Haircap Moss. What looks like a tiny red flower sticking out of it is a spore bearing capsule. No pollination required as ferns and mosses reproduce in a simpler way (but still too complex to go into, here and now). 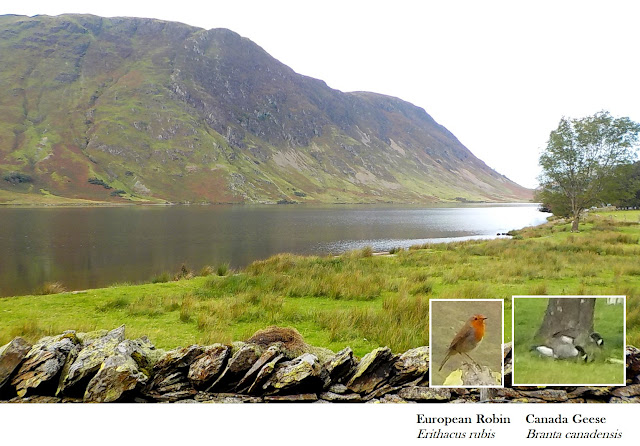 Here we are, back at the water’s edge and that seventeen hundred foot pile of rubble on the far side of the puddle is Mellbreak. Ah, how sweet; a Robin has come to join us. Terrible things really, fiercely territorial, probably why they have red breasts, doesn’t show the blood. You wouldn’t want one as a neighbour, if you were another robin, that is. You see that tree, along the bank? There are a couple of Canada Geese foraging around the base of it. The first pair of these geese came to live in St. James’s Park in London in the late 17th century, where King James II kept his waterfowl collection. They bred and spread, slowly at first, but now there are over a hundred thousand of the beggars in the country. I use the term advisedly because, although they are naturally herbivorous, searching around for choice plants as these two are doing, we have taught them to beg for food. For city birds, we have become their chief source of sustenance. They, in return, give us a rich source of fertilizer (a fact not always appreciated when you tread it into your carpet back home).

So, having walked along by the waterside, and up the gentle slope, we have now arrived at Hause Point. A commanding view over Crummock Water, from which the River Cocker flows down to Cockermouth. I have to admit, for all I mockingly call them the puddle hills, The Lake District truly is scenically spectacular.