The European Nature Almanack - May 2022

Where better to start this month's almanack than with a picture of a honey bee collecting nectar from May Blossom? May Blossom, Crataegus monogyna, is Britain's native Hawthorn and is associated with the pagan custom of 'Bringing in the May'. On April 31st evening, people would go out to the woods to celebrate through the night, returning in the morning with branches decorated with flowers and foliage. It seems reasonable to suppose that the largest of these would have been erected on the village green to provide a focal point for the May celebrations, but the actual origin of the Maypole is somewhat obscure.

May Day celebrations are not peculiar to Britain. Walpurgis Night, April 31st, is celebrated throughout northern and central Europe, when bonfires are lit to ward off witches. Saint Walpurgis was an English Christian missionary born in Devon, England in 710, particularly associated with warding off witchcraft. Bonfires are also a major part of the Celtic festival of Beltane (= bright fire), again, to ward off witches, particularly in respect of protecting their cattle.

Generally, May is seen as the month of rebirth. May Day marks the mid point of Spring, the cold, dark days of winter have gone, and the long, warm summer days lay before us. Crops are growing in the fields and animals, both wild and domestic, are raising their young. Insects are buzzing in the fields, unwittingly providing the majority of a growing chick's diet, and the amphibians and reptiles are becoming more active. 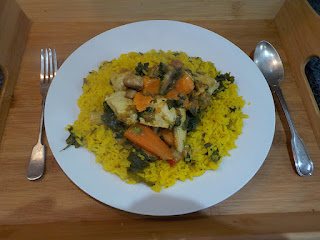 With over sixty wild plants to choose from in May, it's difficult to choose which ones to favour. A lot of them, including hawthorn flowers, can be added to salads but if you're in the mood for something hot, here's a recipe for a Green Curry (not Thai) that I made with two of my favourite hedgerow plants: Lesser Celandine and Garlic Mustard.

This month's wine will be Red Campion flower.