Further back in Time – to Praesos

A couple of weeks back we were overlooking the Venetian hill fort of Monte Forte and this week's little excursion takes us even further back in time to the Ancient town of Praesos. It's pretty well an old pile of stones now and nobody lives there but hopefully we'll find some wildlife. Well, here it is and it looks like we've got a hill to climb so I'll tell you what I know about the place on the way up. Two thousand two hundred years ago it was inhabited by the descendants of the Minoans and they were having a pretty hard time of it. This was because most of Crete had been taken over by the Dorians from mainland Greece and Praesos was one of the last outposts. These Dorians held Itanos to the north and Ierapetra to the south and Praesos finally fell to the Ierapetran Dorians in 155BC. Incidentally Praesos is also a genus of Geometer moths but as to why is a bit of a mystery as they are found in Australia I believe. 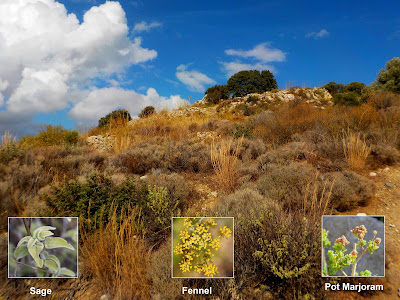 When they weren't being attacked they lived pretty well. There were more animals about in those days including deer and boar which are no longer here and they farmed both livestock and crops. Roasted and stewed meats were both on the menu along with green vegetables and, looking around, they certainly seemed to have a wide variety of herbs to flavour things up with. Just in this small area I can see Sage, Fennel and even some Pot Marjoram. Such a redolent array is also very attractive to butterflies of course and I can see quite a number flitting about. Let's try to get on closer terms with some of them.

Hmm, voyeuristically close it would seem. These are a pair of Wall Butterflies,  doing what comes naturally. The female is underneath with her wings spread while the male is on top, facing backwards, with his wings closed (a position I doubt you'll find in the Kama Sutra). Often, when they are not mating, they hold their wings two thirds open on a flat surface (such as a wall which is how they got their common English name) in order to get the warmth from both direct and reflected sunlight. However, in the heat of the Cretan day you are as likely to find them sheltering in the shade.

Oh look, a little room. I wonder if there's anybody in? I've found someone under a stone in the corner – come and meet her. This lady (and I think that from her size we may assume that she's a lady) goes by the delightful name of Eusparassus walckenaerius and she and her kin are fairly common Huntsman Spiders here in Crete. I appreciate that if you are not fond of spiders then she may give you the heebie-jeebies and this is why you've just demonstrated the old stage direction 'exeunt omnes in divers alarums' (or something of that ilk) but she's an incredibly useful little predator. For one thing she'll take on some of the larger insects like cockroaches which none of us particularly want hanging about the house. Anyhow, I'll gently replace her stone and we'll see if we can find something a little cuter to have a look at.

How about these fellows? You've got to love a lizard and they're darting about all over the place up here. These are Balkan Green Lizards and they are the largest lizards that you will find on Crete, or indeed, in Greece. Yes, I appreciate that they are rather small and brown but that is because they haven't grown up yet. When they do they will be big and bright green. Their scientific name is Lacerta trilineata, the trilineata bit referring to the three lines which you can clearly see when you look down upon them. When they mature and turn green you rather lose sight of these lines and the English name becomes more descriptive than the scientific one.

We are now at the top so it seems to be a good place to lounge with the lizards in the sunshine and admire the view. That's Sitia that you can see in the distance nestling on the shores of the Aegean. 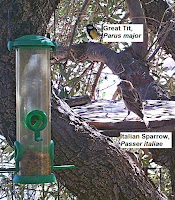 It is about this time of the year that I start to feed the birds at home and this year I've set up the trailcam to record the various species and any other non avian visitors to the table. So far I've only had a trio of Great Tits and a handful of Italian Sparrows but it's early days yet. I'll keep you posted.

P.S. Iris the Mediterranean Mantis is still clinging to the Fennel by the gate.