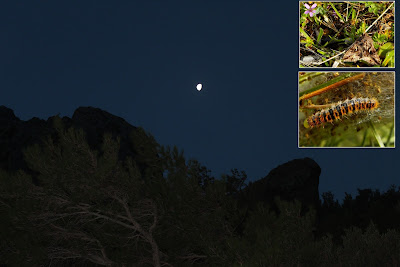 As the first part of our walk today takes us along the road from where we finished last week I thought we'd make an early start of it to see if there are any hares or badgers making use of the human highways at this time in the morning. No sign of any yet but we do have some wildlife that I suggested that we look out for in the Late Winter Almanack. Firstly the Pine Processionary Caterpillars, Thaumetopoea pityocampa, are up and about (although these are described as nocturnal in many of the texts I've often found them reluctant to go back to bed in the mornings) and secondly, as I was just bending down to photograph this Storksbill, a little movement in the undergrowth revealed a beautiful Silver Y moth, Autographa gamma, which is one of the migratory moths I mentioned. The little silver markings in the middle of his wings give him both his English name (being shaped like the letter Y) and his scientific name (being shaped like the Greek gamma). 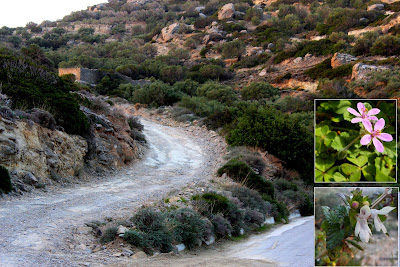 Here's the track where we diverge from the road and get up in amongst the Forty Saints once more but there are a couple of wayside flowers to take note of before we head up into the wilderness. The little mauve job that I was about to photograph before being distracted by the Silver Y is the Storksbill and the other is a White Hedge Nettle. I always think of this as being a rather insecure plant. For a start it's name is based upon it's nettle like leaves which are just for show, they contain no sting at all and secondly you always find it growing up through other plants as if it's afraid to go out on its own. 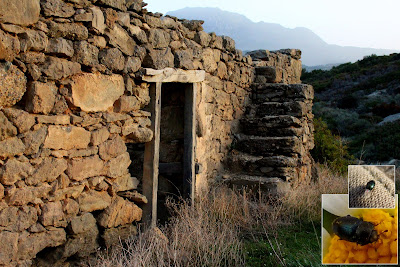 This old ruin seems like a nice place to sit and rest awhile. I can hear chaffinches, a Sardinian warbler and the first greenfinch of the year and we may be able to spot them flitting about from the top of those steps. Meanwhile I seem to be getting infested with tiny beetles. Their wing cases are a little short and they seem to make quite a job of tucking their wings in. That, along with their minute size and their little clubbed antennae identify them as members of the Nitidulidae family which includes the Picnic Beetle. These are so named for their habit of gatecrashing picnics and diving into any alcoholic beverage that happen to be about. Their usual diet includes decaying fruit as it begins to ferment, hence their predilection for alcohol. These chaps however, belong to a different subfamily and are purely pollen eaters as you can see from that one happily feasting on the chamomile down there. 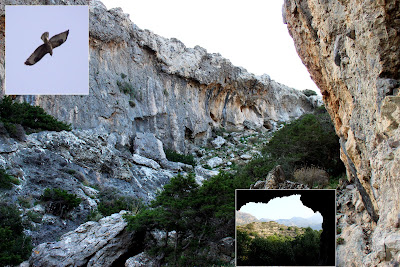 We have three tracks ahead of us and I think that if we take the left hand one we should be able to return by the middle one and save the right hand one for another day. A nice choice as there's another of those cisterns from which we've disturbed rather a nice buzzard. Which reminds me, we haven't seen our ravens, Huginn and Muninn, this morning although I did hear them cronking away in the Milonas Valley as we walked up the road earlier. Probably looking for anything that didn't make it through the night for their breakfast. Meanwhile we have another little cavelet if we just push our way through these carob trees. No signs of recent occupation so if we carefully lower ourselves down into this juniper filled gully we'll climb to the top and see what's up there. 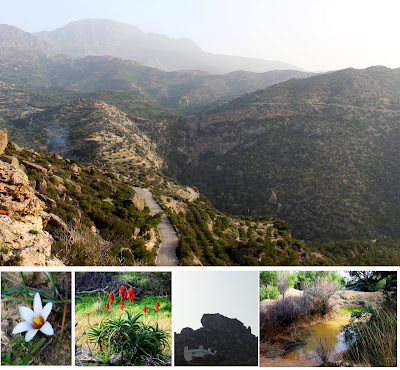 A nice view of the Milonas valley and that defile in the centre hides the Milonas waterfall. There are absolutely loads of these tiny little crocus like flowers up here too but they're not crocuses, they are Romulea (named after Romulus) from a totally different family. A case of covergent evolution; they're more closely related to asparagus than the crocus. We also have a non-native Candelabra Aloe from South Africa up here behind the pumping station looking somewhat incongruous. There's a track leading down from the pumping station and if my calculations are right it should lead us back to the three way junction. Well, it would have done if someone hadn't erected a two metre fence across it. Oh well, we will just have to force our way through the thorny scrub on this side until we come to the end of it. Not all bad news, at least we've found an interesting little puddle. Nothing here at the moment but possibly a good place to set up a camera trap.

I can see the end of the fence – just the other side of this steep walled five metre deep gully. There's a small goat path up the other side but this side is a scramble and slide job. Here goes. Well, that was interesting but I still seem to have the seat of my trousers intact and I was right about the track; there's the little ruin where we met the pollen beetles. Next week we'll see where the third track leads us.