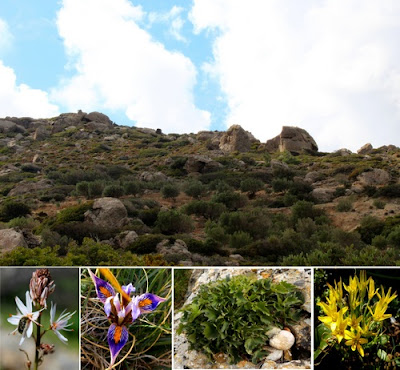 The rain has been; the sun is shining and orchids are appearing all over the Kritiweb. I have a confession to make: I am not a great fan of orchids (but I'm sure we'll find some later on for those of you who are). Meanwhile, we have some serious climbing to do today to get onto that rocky ridge up there so let's have a look at some of the other flowers that are dotted around the hills. The tall white ones that our friend the Tropinota beetle is pollinating are Asphodels and the exquisite little purple and gold blooms are a subspecies of dwarf Algerian Iris that is endemic to Crete and Karpathos. Not everything is in flower yet but this rock lettuce (another Cretan endemic which will have spectacular 80cm blooms in April) is just ripe for picking a few salad leaves. Finally, these little clusters of golden sunshine are Gageas, one of seven species that we have here on Crete. 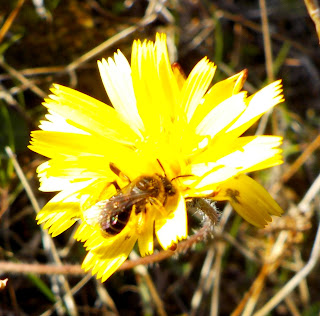 We also have the usual array of 'damned yellow composites' as botanists fondly call them and this one is being pollinated by a Mining Bee. When she's finished collecting the pollen she'll go and find a patch of sandy soil and start to excavate a mine. Down in the mine she'll construct a series of cells, lay in a pollen food store, lay a single egg on each heap of pollen and seal them up. There they will hatch, feed and grow and pupate to emerge about this time next year. Mining bees can be found all over the world except South America and Oceania (Australia, NZ, New Guinea area) particularly where the soil is sandy as it is around here. 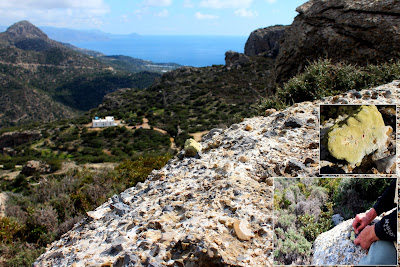 Now we have a bit of serious rock scrambling to do. Ah, there's the pumping station where we were ferreting about last time. Nice to get a reference point as we've zigged and zagged a bit to get up here. This rock is what is known as a composite rock, that is, it is composed of many different types of rock (most of which appear to be unnecessarily sharp) and my eye is drawn to that green one sitting alone on the edge. Let's take a closer look. How strange, it is entirely coated with a crustose lichen. I wonder why that should be? I think I'll take a scraping to look at under the microscope later1. 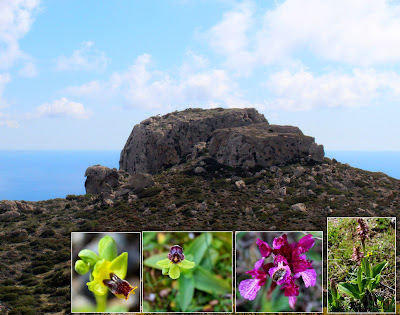 Here we are at the summit which looks to be an ideal place to sit and look at the orchid photographs that we've taken on the way up. The first two are Bee Orchids which mimic insects, very often bees, in order to entice them to come and mate and thus get covered in pollen. Sneaky little things but all's fair in love and war. They are also highly promiscuous and hybridize quite readily so it's rather difficult to identify them to species level with any accuracy. Still, it keeps the botanists amused almost indefinitely. We're on safer ground with the purple one which is a Butterfly Orchid. Not because it is pollinated by butterflies specifically (which would be far too logical) but because it resembles a pea flower. It's scientific name is Anacamptis papilionaceae which means 'like a pea flower with a bent back spur' but as papilio is Latin for butterfly it's finished up being named as a flower that looks like another flower which looks like a butterfly (if you squint at it in a certain light). Finally we have quite a few Robert's Giant Orchids around. It's a fairly robust orchid but by no means the biggest of the Cretan orchids and who Robert was seems to have been lost in the mists of time but there you go, that's orchids for you. Give me a Broomrape any day of the week.

We'll make our way back down now and see what else we can find on the way.

Huginn and Muninn are having a laugh at our expense again. Having neither heard nor seen a feather of them this morning they decide on a fly past with a third Raven in tow just as we're negotiating this tricky bit of rockery. Never mind, there's something even more interesting here: a spring -  and some of the water has collected right here, just as it emerges from the rock.

Here's a little puzzle for you to ponder while I set up the field microscope on this ledge. What photosynthesises like a plant, is made of glass and gets smaller as it grows? In the words of Dr Spock in Star Trek - “It's life Jim, but not as we know it.” These are diatoms. Microscopic life forms who's cell walls are made of silica and because of the unique way in which they divide and reproduce the offspring are smaller (and often a different shape) than the original. Curious little critters all round really but they are responsible for fixing more of the Earth's carbon than all of the world's rainforests put together. Even so, the trees and diatoms combined can't cope with the amount of carbon which we are still releasing into the atmosphere. 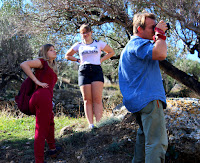 1 I hadn't noticed quite how precariously I was perched when collecting the lichen sample and you may be wondering how I managed to take the photo whilst both my hands were otherwise occupied. Truth to tell, I was accompanied on this hike by my friend and neighbour Nico and two of his teenage girls and it was great having some young, enthusiastic company. It was Nico who took the photograph.