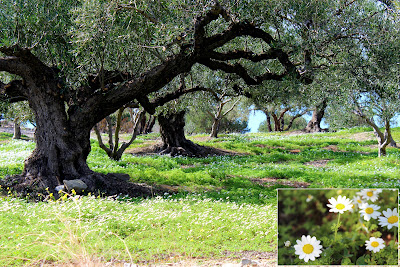 Chamomile tea anyone? Back down here in the olive groves, below the high peaks, the space between the trees is awash with white, scented chamomile interspersed with wood sorrel; a testament to the lack of herbicides and pesticides used in these parts. This is not the species that is used in the commercial production of chamomile tea but it is closely related and just as efficacious as a pleasant, restful beverage. Just steep 3-4 tablespoons of flower heads in a mug full of boiling water for 5 minutes and decant into a second mug. 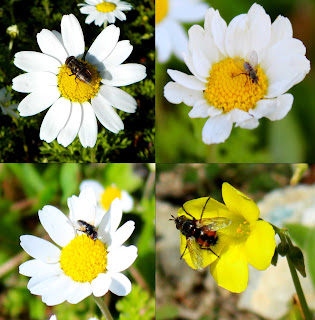 One of the reasons that we have so much chamomile around here is due to the flies. These hard working little insects are often overlooked at best or despised at worst as irritating nuisances but they contribute hugely to the pollination of wild and agricultural plants. Just a quick look around and I can see at least four different species buzzing around, sipping nectar and thereby transferring pollen. So when you're sipping your chamomile tea give a quick thank you to the flies who made it possible. 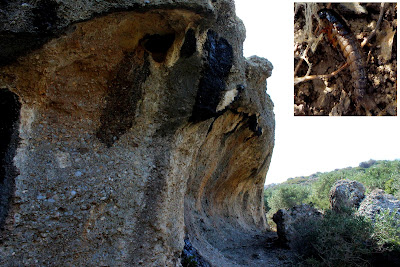 Anyhow, enough lounging about; we're taking a trek around the northern flanks of the 40 Saints today where the winds carve hippo mouths out of the rocks. This is the damp side where rivulets of water darken the rocks like infected teeth and strange looking beetle grubs lurk under stones, feeding themselves up to mature into iridescent adults. This one is a ground beetle I think. You can tell that they're beetle larvae, rather than caterpillars, as they only have the six true legs at the front and none of the stumpy little false legs that caterpillars have. 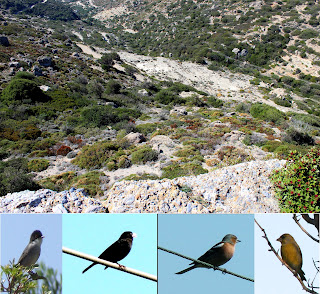 The next part of our circumnavigation of the hills will take us into that valley way down there and the route looks interesting to say the least. We'll have to watch our step so there won't be much chance for visual observation during our descent but that's no reason that we can't keep our ears open. Listen out for the machine gun rattle of the Sardinian Warbler, the chack-a-chack alarm call of the Blackbird, the descending trill of the Chaffinch and the elongated dzeeee at the end of the Greenfinch song. 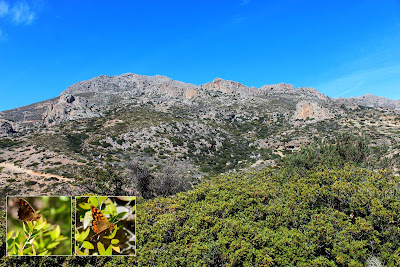 Well, we've made it without any sprained ankles or the suchlike and it's nice to be on level ground once more. There are more hills to the north, waiting to be explored but we'll content ourselves with poking around these lentisc bushes for a bit today before continuing on down the valley to our left next time. It's quite shady down here which is perfect territory for our old friend the Speckled Wood butterfly. Here in Southern Europe they are brown with orange markings but the further north you go in Europe their colour changes gradually to a deeper brown with yellow, cream or even white markings.

It is with some sadness that I learn of the death of Stephen Hawking. His body relinquished the fight against amyotrophic lateral sclerosis this morning some fiftyfive years after doctors gave him two years to live. The information in that brilliant mind however can never be lost from the universe, as Hawking himself demonstrated, even in a black hole. So how and where in the universe is that information stored? I have no doubt that Stephen Hawking will eventually try to solve that puzzle but in the meanwhile I hope he has a little time (if it exists in his present state) to rest in peace awhile.
SD 14th March 2018.

Next week the Spring Equinox will be upon us so look out for the next part of the #CreteNature Almanack 2018 in which I'll be illustrating some of the things to look out for in early spring.