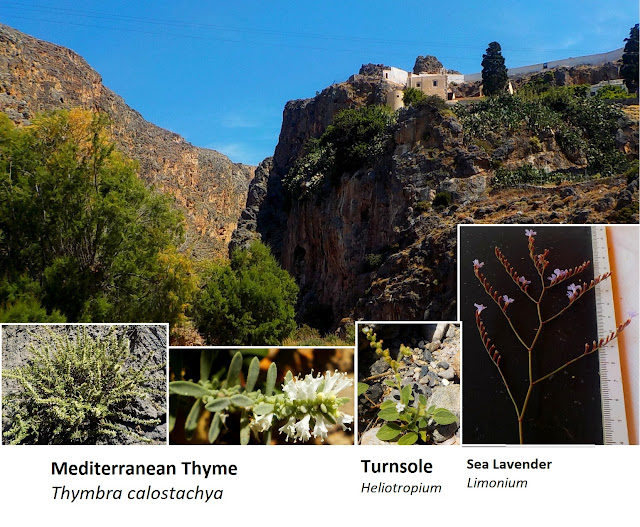 Samaria Gorge is the ‘must do’ Cretan Gorge on every tourist’s check list. Great, it really is spectacular, but so are most of the hundreds of gorges on Crete, they just don’t have the marketing behind them. One of these is Perivolakia Gorge, the head of which, we visited back in December 2017. It is also known as Kapsa Gorge on account of the monastery of that name, perched on the eastern flank. It was to here that botanist Steve Lenton and I decided to make our first post lockdown foray (mainly because he was after some obscure species of Sea Lavender, endemic to this particular gorge) and I’m happy to go anywhere.

As usual, Steve went galumphing up the gorge in search of his flower, whist I pottered about, looking at everything in general. Once through the Tamarisk trees, the gorge became a riot of Oleander and Chaste Trees with Caper bushes hanging from the cliff walls. I also found a species of Mediterranean Thyme, Thymbra calostachya, which is endemic to Crete and only found in a few locations, here in the east of the island. 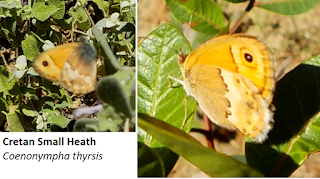 As these are all fairly aromatic plants, it is no surprise that butterflies are attracted to the gorge in considerable numbers; Whites, Blues, Brimstones and Speckled Wood were all flitting about as were the diminutive Cretan Small Heath, Coenonympha thyrsis. These little butterflies are also endemic to Crete and particularly prevalent in June. Some show considerable blue shading at the base of the wing whereas others show virtually none. Whether this is sexual dimorphism, or merely a general colour variation, I have been unable to determine. Maybe some specialist Lepidopterist can help me out here? 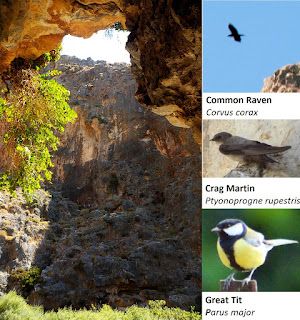 Chasing butterflies in a hot gorge in June is a rather silly occupation, so I retreated to a small cave. All was quiet, save the insects, the birds, and the occasional botanist crashing through the undergrowth, who shall remain nameless. Birds, like aeroplanes, have their own air corridors. Perching birds (Passerines), such as the Great Tit, like to keep below tree top level where there are plenty of branches on which to perch and sing. Crag Martins prefer the middle levels where there are plenty of crags, and a banquet of high flying insects on which to swoop down. Whilst, surveying all from on high, the Ravens keep up their sonorous cronking call. 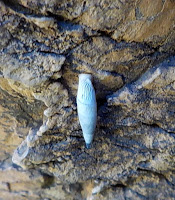 Clinging to the walls of the cave are a number of Door Snails of the Albinaria genus. There are up to 30 different species of these (according to which malacologist you talk to) in central and eastern Crete, and each species has its own geographical range, often depending on who moved what stones where, and when. Historians have tracked human movement back to Roman times by observing the distribution of these door snails. This one, Albinaria teres, is quite widespread across Lassithi province. 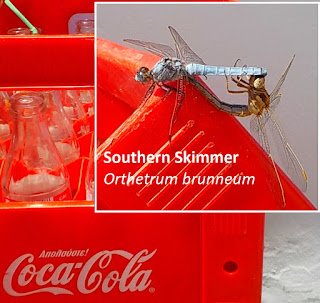 Having located and sampled his obscure Sea Lavender, Limonium sp. to be determined, we decided to repair to The Oasis Taverna where a couple of beers brought forth roast pork, potatoes, stuffed courgette flowers, bread and cheese. We put the world to rights as usual (well, someone has to), Steve photographed his linoleum (sorry, Limonium) and I watched a pair of Southern Skimmers, Orthetrum brunneum, mating on the side of a soft drinks crate. Things really do go better with Coke, apparently.

How to recognise butterflies, dragonflies, snails and many other of the planet’s smaller life forms, s simply explained and illustrated in The Quick Guide to Creepy-Crawlies