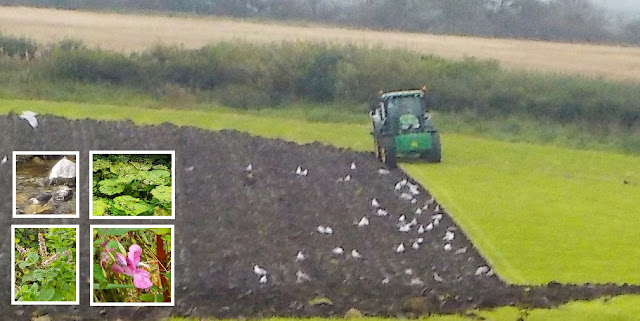 The Autumn Equinox has passed, the nights are drawing in, there’s frost on the grass in the morning, and the gulls are following the plough. Time to don sweaters and boots and enjoy the fruits of autumn. So, a trip out into the countryside today, and a stroll by the river Derwent as we visit the village of Great Clifton. A small village; a church, a shop, a post office and three pubs, at least one of which appears to be still operational. We’re heading for the north east corner of the village, where a footpath leads down to the river. 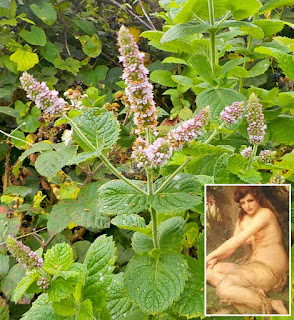 Right from the beginning, just behind the last houses, we have bushes full of blackberries and this fine stand of Apple Mint. There are a lot of different mints, and a good deal of hybridisation between them, but let me take you over to Greece and tell you the story of the original Mint, or Minthe, as she was then known. Minthe was a nymph, a minor deity in the Greek pantheon, and she was cohabiting with Aidoneus [AKA Hades], who was probably hell to live with. He certainly wasn’t the faithful type, as he proved when he kidnapped Zeus’ daughter, Persephone, and brought her home. Menthe, not being into the Ménage à Trois scene, did what any self-respecting nymph would do, and threw a tantrum. Persephone, already narked at being abducted, promptly trod on her. Being a fully fledged Goddess, it was all she had to do to rid herself of this irritating little nuisance. Minthe disappeared into the ground, and found herself transformed into the plant in front of us. To this day, she struggles to free herself from this enchantment, which is why mint grows so prolifically. 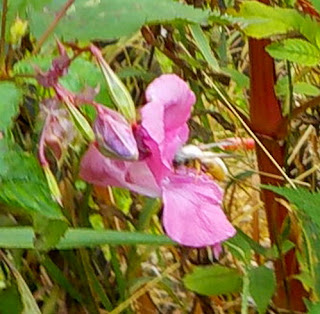 I’m beginning to wish I’d taken a few leaves of mint and rubbed it into my face mask. There’s a small sewage treatment plant down here that’s making it’s presence known. Usually a good place to spot birds, but there are none here today. Plenty of Himalayan Balsam, unfortunately, which we’ve already discussed, but it seems to be attracting some very pale, almost hairless bees. I’ve not seen these before, anyone know what they are? Can’t get a good picture unfortunately.

Thanks to the guys at the Hymenopterists Forum for informing me that it is a wasp, Vespula sp. covered in pollen. 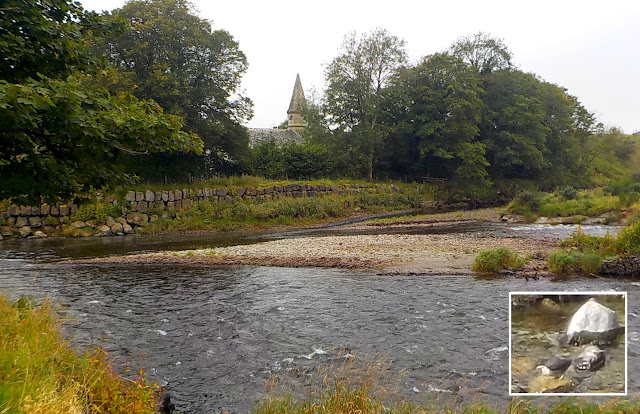 We’ve reached the riverside and not a bird in sight. But wait, over there on those rocks – birds always live on the opposite river bank – it’s a White-throated Dipper. Dippers are fascinating birds to watch, standing on a rock just above the water line, bobbing up and down for reasons best known to ithemselves, and then suddenly plunging into the water. A quick swim around at the bottom of the river, then back up with a mouthful of freshwater shrimp (their favourite), or some other delicate morsel such as a Caddisfly larva. I could watch them for hours if the drizzle hadn’t turned to light rain. Luckily, the next part of the walk takes us up into the trees. 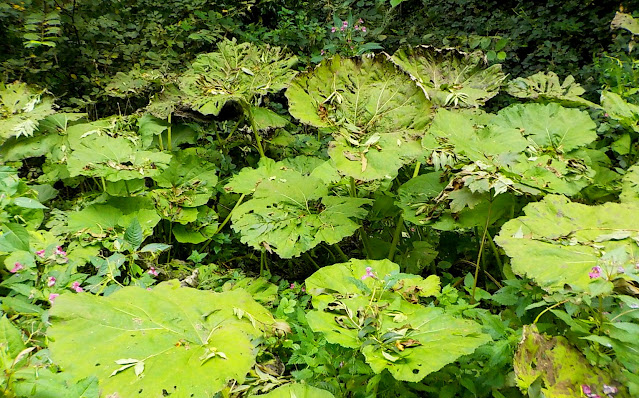 You’d think that it was only in the tropics where you’d get plants with leaves the size of a small occasional table, but we have some here in Britain as well. I’m still not that clued up on British plants yet, but I’m pretty sure that this is Butterbur and not Rhubarb that has escaped from somebody’s garden. It’s a very useful plant, medicinally, but you have to be very careful with it. In amongst its cocktail of potentially lethal chemicals is one called petasin. When extracted from the plant and made safe, it is effective against both migraine and hay fever, but you still have to be very careful. For instance, you shouldn’t take it if you’re pregnant, or if you’re on heart medication, or even if you’re taking other natural supplements such as St. John’s Wort. Definitely not part of a home remedy kit. Oh, and if you’re scratching your head thinking, where have I heard of Butterbur before? Barliman Butterbur was the landlord of The Prancing Pony in Lord of the Rings.


And that leads us back up into the farmlands, where the gulls are still following the plough and the light rain seems to be thinking of turning into something a bit heavier. Shame the pubs aren’t open yet, I could just do with a roaring log fire. Isn’t it time that someone taught those raindrops about social distancing?


Stay safe and be happy,