Into The Woods of Portinscale

The leaves are beginning to shade autumnal and I rather fancy a walk in the woods. Being in Crete for the last decade and a half, I’ve rather missed this seasonal spectacular as the majority of the trees down in the south east of Crete are evergreen olives and pine. I’ve found a promising looking woodland, at the top of Derwent Water, and so we’re off to the village of Portinscale and Into The Woods. 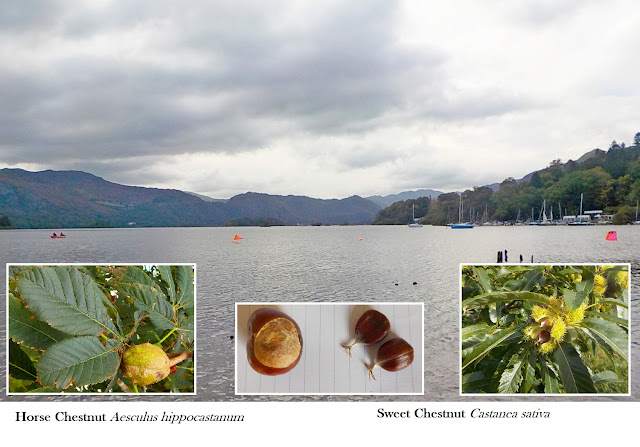 The village lies on the north bank of Derwent Water, just a couple of miles from the town of Keswick, and it would be a shame not to take a quick look at the puddle before we head off into the trees. And just as we step onto the footpath, the first item of interest is.. a tree. In this case a Sweet Chestnut. One to bear in mind for Christmas as the nuts are only just beginning to fill out. Sweet Chestnuts are not to be confused with Horse Chestnuts, of course, as the former are good to eat while the latter are mildly poisonous. Despite their similarity of names, they are not even in the same family. How to tell one from the other? Sweet Chestnut leaves are long, thin and glossy, the nut cases are prickly rather than lumpy and contain more than one nut. The nuts are also flat, or even concave on one side, as opposed to the fully rounded conker of the Horse Chestnut. 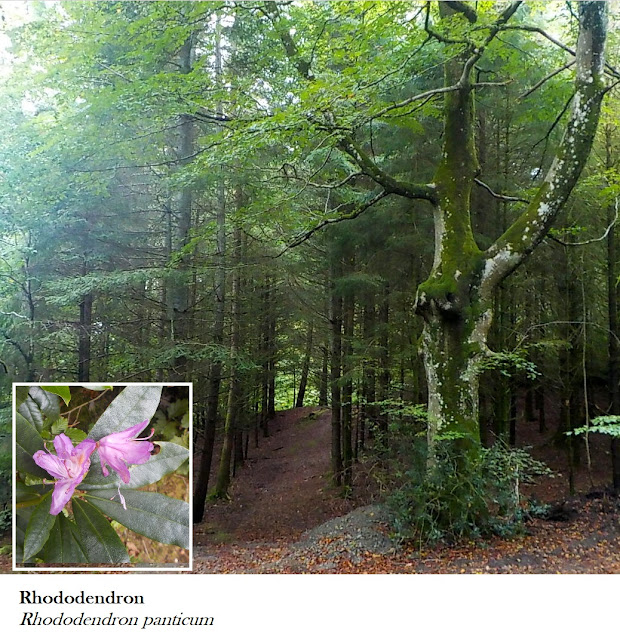 Just before we delve into the woodland proper, I’ve just noticed that the Rhododendrons are budding and a few have burst into flower. This particular species, Rhododendron ponticum, first came over to the UK in the 18th century as an ornamental. Since then it has spread like wildfire and dominates great swathes of our woodland, at the expense of our native plants. You’ll probably not be surprised to learn that they are very closely related to another ornamental favourite, the azalea, but as part of the heaths and heathers family, they are also related to Cranberries, Blueberries and Huckleberries. 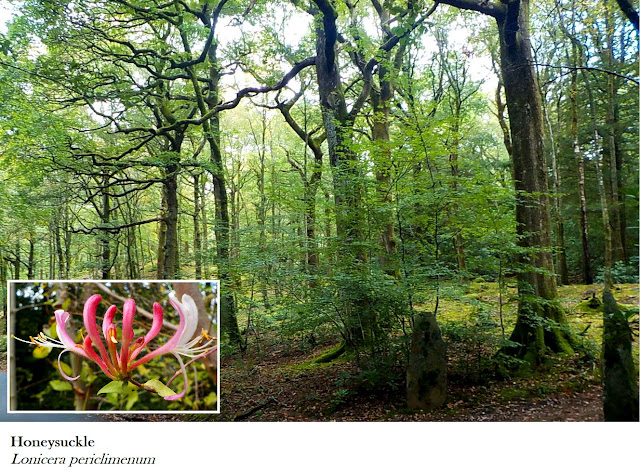 While we’re on the subject of flowering plants, here’s another beauty. This one is Honeysuckle, also known as Woodbine from its habit of entwining itself around trees. When we were young, we used to pick the flowers and suck the sweet nectar from them. That was before we discovered the other type of Woodbines; half a crown for a packet of ten at the corner shop. The flowers give off their scent at night and are primarily pollinated by moths, although long-tongued bees are also partial to them during the day. The other animal to take advantage of them is the dormouse, which not only eats the flowers but also uses the bark from their woody stems to construct its nest. 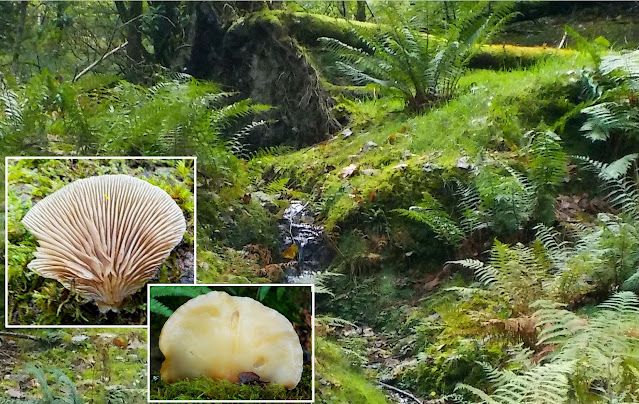 Into the damp, dark, mossy part of the woods now and plenty of fungi about. This one looks interesting. I think, and it’s only a think, that this is an Oysterling. There are two types of fungi that grow laterally out of wood like this: the bracket fungi, which have pores and the pleurotoid fungi, including Oyster and Oysterling Mushrooms, which have gills. After that, identification takes a bit more work, which we will get around to, when and if I ever get around to exchanging contracts on this portion of an old corn mill which I’m buying. 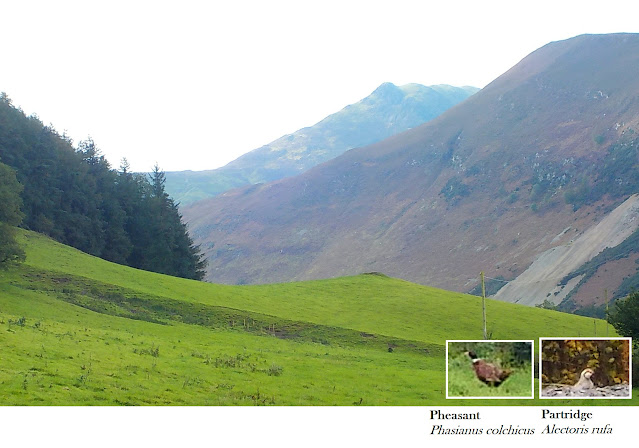 Wow! Out of the woods and into an alpine meadow. And we have some game birds about. The pheasant, we’ve met before in An Urban Oasis and the Partridge is its smaller relative. They’re a native species but are often bred for hunting and have been introduced into North America for the same reason.

The first partridge was Greek – according to mythology, anyway. Remember Daedalus, he who attached wings to his son Icarus, launched him off a cliff and discovered the melting point of wax? This was in Crete, and the reason they were in Crete was that Daedalus was on the run from mainland Greece, having tried a similar experiment with his nephew, Perdix. This was before Daedalus had thought of the wing thing, and Perdix flushed the first partridge just before he hit the ground with a splat. The partridge made a mental note of the effects of falling from a great height which is why they now nest on the ground and never fly higher than seems compatible with suddenly finding themselves not flying. Just high enough to get them into a pear tree.

Which brings us to the C word. Yes, I know there’s still 11 weeks to go, but some of you like to get the present shopping done before the 24th of December and like to give something a little more thoughtful than an Amazon voucher. So, for the budding naturalist in the family, The Quick Guide to Creepy-Crawlies is a great introduction to invertebrates, suitable for all ages. If you only want to spend a fiver on a friend, then Not Just For Twisted Women is available in paperback now, and The Eggs of Saramova and other stories will be available next month. If you just want a little something for yourself to read, now that the nights are drawing in, then both story collections are available on kindle for the price of a decent cup of coffee. Much as I hate self-promotion, people do tell me that they’re all cracking good books!