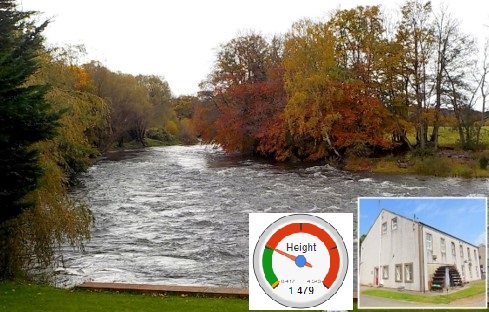 To recap: having lived in Crete for the past 16 years, I have now decided to get the best of both worlds by dividing my time between Crete and the UK. This has meant buying a property over here, to whit, a portion of a 200 year old corn mill, in Cockermouth, Cumbria. This gives me the novelty of living close to my mother and one of my sisters. I’m not sure what Cockermouth has done to warrant us all descending upon it as, for the past forty years, we’ve lived as far apart from each other as possible. As a naturalist, I am as interested in what lies outside my front door as what lies inside. In this case it is the River Derwent. It usually lies outside, but in 2015 it came in through the front door, and in the ‘Great Flood’ of 2009, which put most of Cockermouth under water, it crept over the windowsills. For that reason we’ll be keeping a close eye on the river level. At the moment it is running at 1.479 metres, which is just about within its normal level. 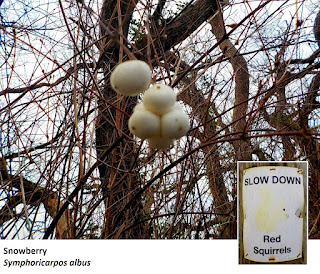 Enough waffling, let’s go and explore our new playground. There is a stretch of woodland on our way up to the village of Papcastle with a helpful roadside sign instructing the red squirrels to slow down. This is good news for me as I’m not as quick with the camera as I used to be. No squirrels this morning but plenty of Christmasy Snowberries. This is a north American plant which was imported into the UK in the late 19C as an ornamental and has now become widely naturalized. The native Americans used it as both soap and soup, oddly enough seeing as it is mildly poisonous, but crushing the berries between your palms gives you an instant hand lotion. 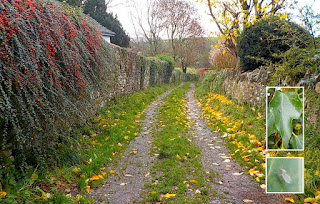 Once into the village, which in Roman times rivalled Carlisle in size, there is a farm track down to the riverside pastures which is full of interesting stuff. Plenty of Ivy coming into flower, providing a good winter harvest for birds and insects alike. Particularly these tiny white flies this morning. I’m pretty sure that these are biting midges of the Ceratopogonidae family, as opposed to the non-biting midges of the Chironomidae family. You don’t have to stand around getting bitten (or not) to tell them apart; male non-biting midges have feathery antennae, male biting midges don’t. 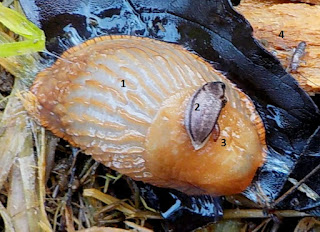 Aha! A log pile. Let’s see who’s about. The big fellow (1) is a Roundback Slug of the Arionidae family. Very common slugs that are difficult to tell apart as their colouration is influenced by their diet. The smaller chap, sitting on his head, (2) is also a Roundback but part of a subgroup, known as the Fasciatus, which have a false keel running down the back. Sandwiched between the two (3) looks to be a larva of some kind, while up in the top right (4) is an Elongate-bodied Springtail of the Tomoceridae family. Although they have six legs, they are not insects but hexapods. To qualify as an insect you must have had two pairs of wings at some point in your ancestry. (There is a section on hexapods – springtails, coneheads and diplurans in The Quick Guide to Creepy-Crawlies). 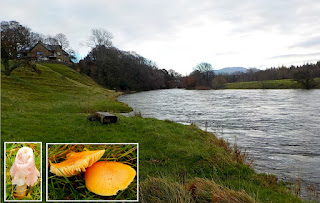 Here we are, down by the riverside and I spot a handy seat where we can sit and watch the river for a bit. Not much in flower at the moment, the odd bit of Yarrow but, thankfully, no Himalayan Balsam (see Urban Oasis). What we do have though, is a couple of Waxcap fungi which tell us something about the grass at our feet. This is a habitat known as Waxcap Grassland, which is declining throughout Europe due to modern agricultural practices. It is nutrient poor grazing land – sheep in the case of this one – which supports fungi biodiversity in general and waxcaps in particular. This Pink Waxcap, Porpolomopsis calyptriformis, which appears to have been well nibbled, is vulnerable to extinction on the IUCN red list, so that has to be our find of the day. 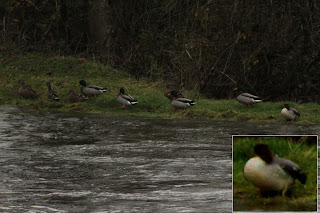 Unfortunately, the public footpath ends at somebody’s garden gate just along here which means that we can’t get into the woodlands beyond. I’ll have to get to know the neighbours! We have, on the opposite bank (where all birds live), a herd of Mallards, a herd being just one of many collective nouns for a group of ducks. Flock, team, paddling and raft being some of the others. But there is a stranger in the camp, the duck on the extreme right is not a Mallard but a Goosander, Mergus merganser, a sea duck that breeds in Scandinavia but comes down here for some Cumbrian warmth in the winter. They are piscivorous (fish eating) ducks and they will often work as a team, forming a semicircle around the fish and shepherding them into the shallows, where they are easier to catch.


So, that’s our first foray into our new hunting grounds and I’m sure we’ll find many more interesting things in these diverse habitats as the seasons turn.


Explore the region with the #CreteNature interactive Hiking and Nature Map