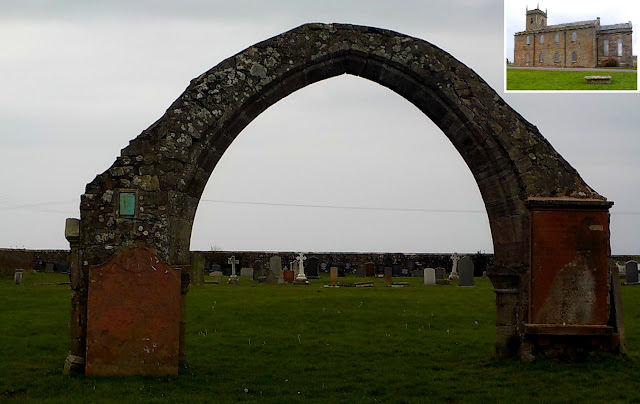 Those of you who have known me for some time will be aware that I have recently moved to Cumbria, having spent the past sixteen years on Crete, documenting the flora and fauna of the eastern end of that fabulous Greek island. It will come as no surprise therefore, that my interest is sparked when Greek and Cumbrian history overlap. Which is why I’ve brought you down to the village of Lowca today, on the west Cumbrian coast. This archway, in the grounds of St. Bridget’s church marks the site of the Roman fort of Gabrocentum, part of the defences that extended beyond Hadrian’s wall. The Roman soldiers who manned this fort, the best part of two millennia ago, were Ligonians, from France and Thracians, from Greece. So, as we follow the coastal path, we will be treading in Greek footsteps. 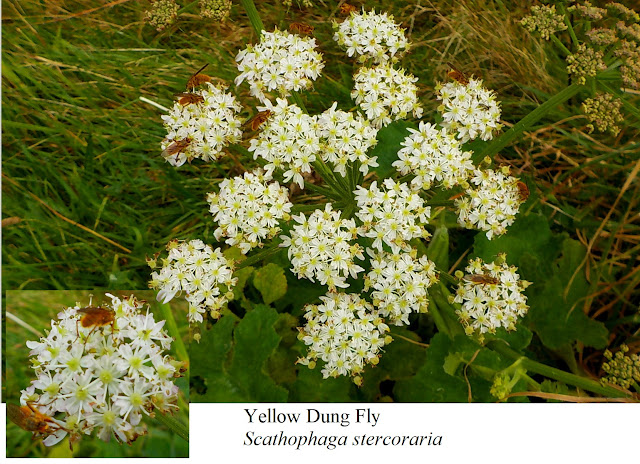 There aren’t so many flowers about at this time of year; a few sprigs of Yarrow, the occasional knapweed and this odd bit of Hogweed, which seems to be attracting a considerable number of Yellow Dung Flies. These are marvellous little creatures who keep the dung from building up in our pastures, and thus protect our cattle from many of the parasites that live within. The only problem is, we also protect our cattle with veterinary medicines.. which also kill the Dung Flies. The presence of drug residues in cattle dung is carefully monitored to ensure that we aren’t doing more harm than good. It’s a messy job, but someone’s got to do it!

Since March, I’ve been moaning on about the lack of my birding camera, which was held up in transit due to the world going into hiding from our most dangerous natural predator, the virus (if you thought that Homo sapiens was the apex predator on planet Earth, think again). Pleased to say that I now have it back, lovingly caressed in my sticky mitt, and a trio of Curlew have just flown in, enabling me to check that it is still in good order after its seven month incarceration. As you can see, it’s working just fine. Down on the rocks, in the sea below us, we also have a Great Black Backed Gull and, what looks to be, a Great Cormorant, but they’re slightly out of range. The cormorant will probably be the other subspecies, Phalacrocorax carbo carbo, to the P.c. sinensis that we saw at Loweswater last time out. 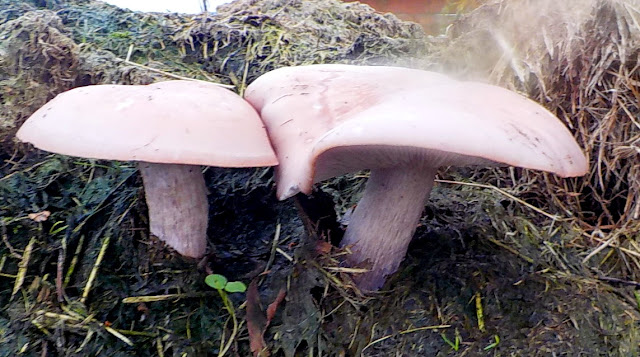 Which reminds me, while we were poking about in the woodlands there, we were discussing the differences between gilled, pored and bracket fungi as an introduction to mushrooming. Having come inland a bit now, via an evil swamp that our intrepid local guide has just led us through, we have a couple of fine looking mushrooms growing out of a compost heap. We can see that they are gilled mushrooms (Agaricales) but the question is, are they nice, edible blewits, or poisonous webcaps? 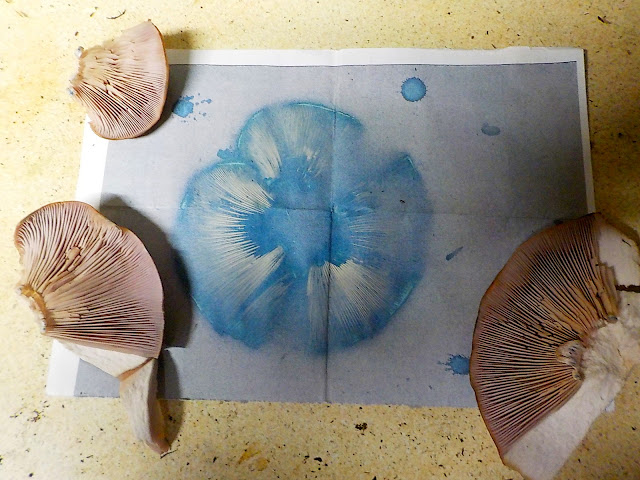 Welcome to the world of spore printing. Luckily, our intrepid local guide comes equipped with a supply of small mushroom sampling bags, so if we carefully pluck one of these fellows without touching it with our hands, we can take it back and make a spore print. The only thing we need for this is a sheet of paper, preferably pale blue as mushrooms don’t, as a rule, have pale blue spores. Mushroom spores are the reproductive bits and are held between the gills. Now we simply remove the cap from the stem (still in the bag), place it gill side down on the paper, and leave it overnight.

And the following morning, voila!, a lovely streaked pattern of white spores has appeared. That indicates that we have an edible blewit. Poisonous webcaps have reddish brown spores. Anyhow, we won’t go making mushroom omelettes just yet as there are further checks to make to be certain that we’re not going to kill ourselves, but spore printing is one of the most important tools in the bag when it comes to identifying edible fungi. To be continued… as they say.

With thanks to Ishbel Cooke for guiding us around Lowca and avoiding most, if not all, of the treacherous swamps.

Christmas is getting closer. Just saying.