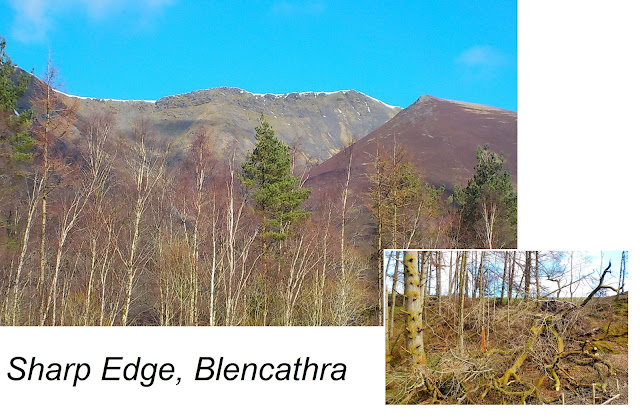 Back in March of last year, I took you on a walk half way along the disused railway line from Keswick to Threlkeld. Sunday was a beautiful day, and so we decided to do the other half, fortifying ourselves with a cup of coffee at a lovely coffee shop in the village beforehand, and beginning below the awe inspiring Sharp Edge of Blencartha, neatly delineated by a line of snow. As we walked down towards the line, evidence of the recent three storms was clearly visible. 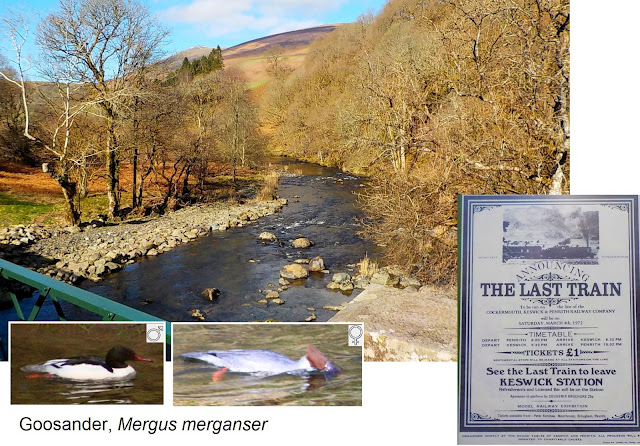 The river Greta winds its way around the old line which was closed fifty years ago this month. It is now a tarmacadam path (suitable for wheelchairs). Down below, a pair of Goosander are fishing for breakfast – note how the female is holding her head, horizontally under the water. These are fish eating sea ducks who come down from Scandinavia in the winter. If you look closely at the male, you can see the hook on the end of his beak which he uses to stab the fish. 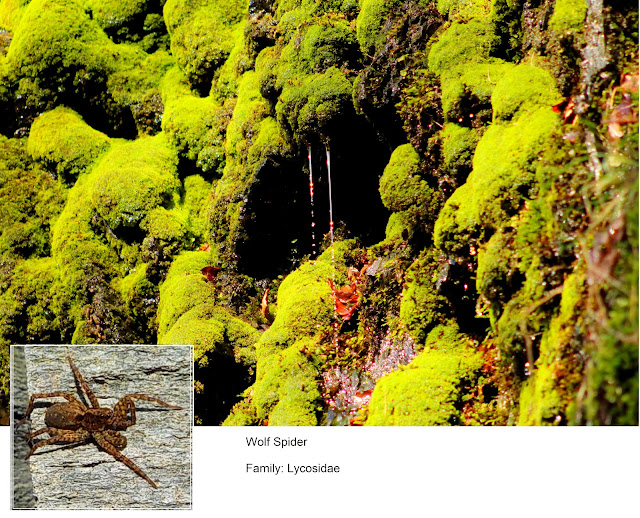 The line passes through tunnels and deep, moss covered cuttings, where the water drips down, reflecting golden red globes of sunlight. Absolutely mesmerising. A Wolf Spider stands motionless, awaiting prey, upon a bare patch of rock. They have excellent eyesight, the top two of their eight eyes being very large. They don't spin webs but are opportunistic hunters, pouncing on their prey as it passes, and injecting them with venom. This can produce an itchy welt in us humans but isn't dangerous. In order to make this a circular walk, we'll take this footpath up over the hill where a flock of Herdwick sheep are contentedly grazing in the warm winter sun. #LadyBeetles are the subject of the insect section of this month's European Nature Almanack and here is our first one, a 7-spot, our most common species. Birch Polypore fungi adorn the Silver Birch trees, and down on the floor, among the reddening leaves of the Geraniums and Cranesbills, Trumpet Lichens rise above the Sphagnum Moss.

Looping round, we meet up with the River Greta once more, and the banks are very inviting for our first picnic of the year. Help yourself to a sandwich. I see we are being joined by a Reed Bunting. These are resident birds, but are often mistaken for sparrows, particularly the females. They are monogamous birds and should start breeding at the beginning of next month. About a fortnight later, the female will lay four or five olive grey eggs in a nest in a low bush or grass tussock. Both mother and father will feed and care for the offspring. All say ahhh! 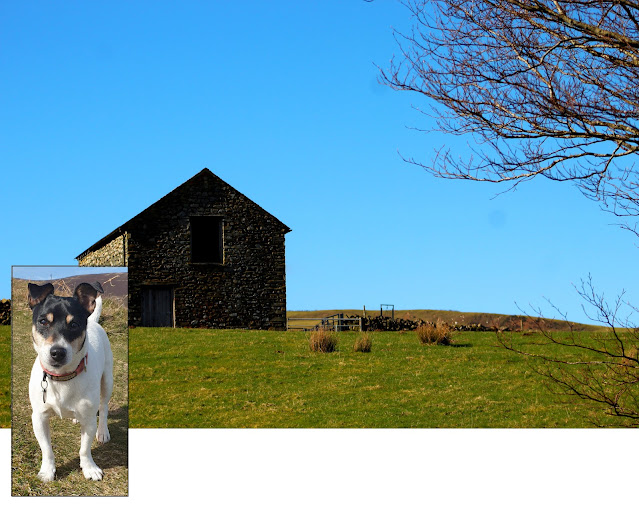 Jack The Navigator Hound is with us, but sad to say he has deteriorated quickly over the past fortnight. He's spent the walk cradled in the crook of Ishbel's elbow, enjoying the fresh smells of the Cumbrian countryside. I wonder if he's remembering the thousands of miles that he's walked over his sixteen plus years?

It was a heartbreaking decision, but it would have been selfish to prolong his demise, and we took him to the vet's last night where he was quietly put to sleep and departed his long and adventurous life in Ishbel's arms. Rest In Peace, Jack, my little friend.

A sad note to end on, but a change of location next week as we're off to Bulgaria. I'll try to send some pictures on Instagram and give you a full report when I get back. Meanwhile, some more books that may be of interest: