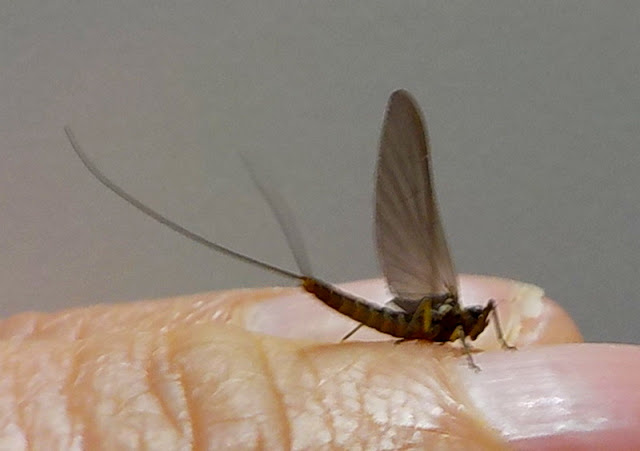 I looked out of my kitchen window the other morning and found this little guy sitting on the inside of the pane. It is a Mayfly, which is a bit misleading as they don't necessarily appear in May and they are not flies. They are, in fact, one of our oldest living flying insects, having originated in the early Carboniferous period, over 300,000,000 years ago. Together with Dragonflies and Damselflies (who came along some fifty million years or more later) they make up a division of insects called the Palaeoptera, which means 'old wings'. All other flying insects, butterflies, beetles, flies etc. are part of a division called the Neoptera, or 'new wings', that didn't come into existence until much later. 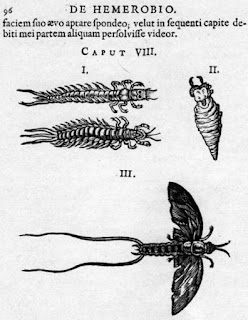 Mayfly nymphs are aquatic, and live primarily under rocks in streams. They may spend months or even years in this state, undergoing several moults before changing into a subimago for a very short time (unique among insects), then a full imago, before hatching, often in very large swarms, into adulthood. Their adult lives are very short: they mate and die, often within hours. This gives the name of the order to which they, and only they, belong; the Ephemerata. This beautiful illustration, drawn by Augerius Clutius in 1634, shows the nymph, imago and adult stages.

Books on Mayflies tend to be specialist and expensive, like over £150, but there is a section on Mayflies in The Quick Guide to Creepy-Crawlies which is only a tenth of the price (and includes sections on all of the other invertebrates as well). If you want to try a good Mayfly hatching project, maybe with your children, then Dr Paul Gaskell's book may be right up your street.

at April 11, 2022
Email ThisBlogThis!Share to TwitterShare to FacebookShare to Pinterest
Labels: insects, mayflies