Arran Special 2 - In Search of Seals 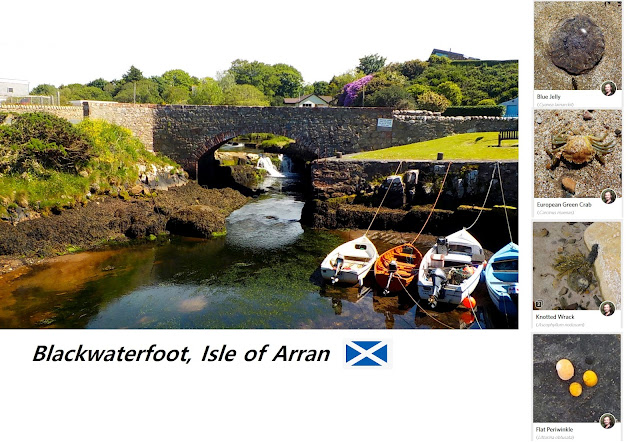 It's a beautiful morning, so let's head up the west coast to see what we can find. First stop is the village of Blackwaterfoot where Clauchen Water flows into Drumadoon Bay. A beautiful spot for introducing Mattie to the pursuit of rock pooling and for teaching her that not everything is best investigated by trying to eat it. Like this Blue Jelly for example. The sting of this particular species is quite mild but, if you are stung by a jellyfish do not try to treat it with vinegar, alcohol or urine. It will only make it worse. Better to wash it in sea water and take an antihistamine tablet. Next we have a European Green Crab (AKA Shore Crab) which is native to the north east Atlantic and the Baltic. However, it is listed as one of the world's 100 most invasive species and can be found on coastlines almost everywhere. In New England, they have taken to eating them and have even produced a Green Crab Cook Book. Probably go nicely with a bit of pickled Knotted Wrack which we also have here. Decorate with a few boiled Periwinkles and that's lunch sorted. 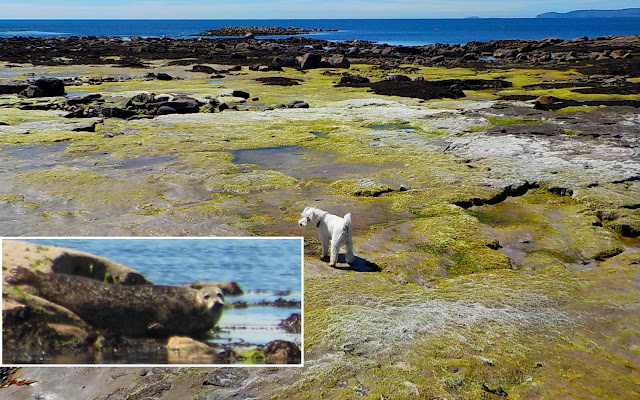 Well done Mattie! That's the first of Arran's Big 5, The Common, or Harbour, Seal. There are about eight of them on and around those rocks out there. Harbour seals pretty much stick to the same haul out spots, so these are probably resident here. Now that sealing has been banned in UK waters under the Conservation of Seals Act (1970), they can live to their full term, which is 20-25 years for males and 30-35 years for females. Aren't they beautiful? We'll carry on north, have a spot of lunch somewhere, then Ishbel has spotted an interesting looking walk for this afternoon with some intriguing caves to find. 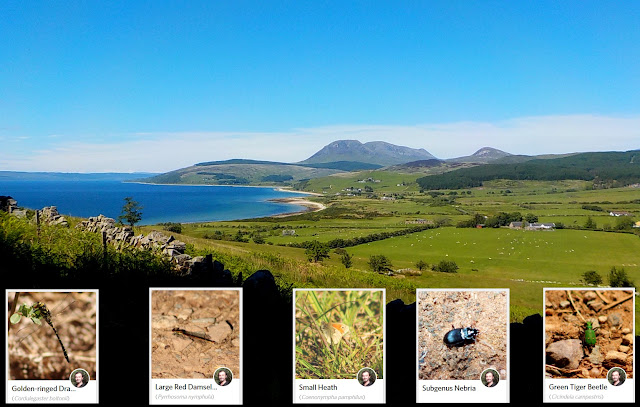 That was different. Cold jacket potato with chilled coronation chicken and salad. I wonder if it was meant to be served like that? Still, it wasn't quite as unappetising as it sounds. We're on the edge of a fir plantation with a little burn running alongside the path. Looks like a good walk for an insect safari. And that's a good start – a beautiful Golden-ringed Dragonfly. At 7-8cm long with a 10cm wingspan this is Britain's longest dragonfly. In comparison, this Large Red Damselfly, despite its name, is only about half that size. Note the wing positions: out straight = Dragonfly; folded along the back = Damselfly. Over here we have the smallest of the Satyrinids or Brown Butterflies , The Small Heath. These are grassland specialists and the caterpillars feed exclusively on grasses, whereas the adults are nectar feeders. We also have a couple of beetles. There's a Gazelle Beetle, so called because of their speed, and my favourite, the Green Tiger Beetle (another speed merchant in the beetle world – see Water, Water, Everywhere). Dragons and Damsels, Butterflies and Beetles are all covered in The Quick Guide to Creepy-Crawlies. 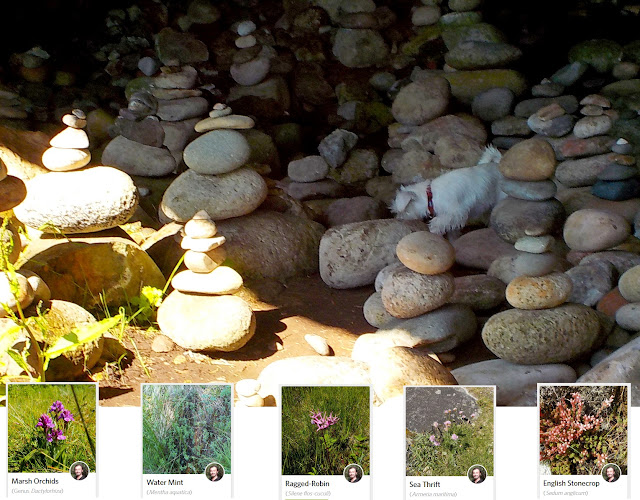 Ah we've reached the caves. Although the biggest one is called The King's Cave, it's doubtful that this is the one used by Robert The Bruce before the Battle of Bannockburn and I don't see any doggedly determined spiders either. I do see a determined little doggy though. What's she found now? Just time to mention a few of the flowers that I've spotted on the walk. Just outside the cave there are Marsh Orchids and Ragged-Robin as well as some English Stonecrop (seems the English are invading Scotland once again). Down by the sea there's Sea Thrift and Sea Campion, and growing in the burn, some rather tasty water mint. 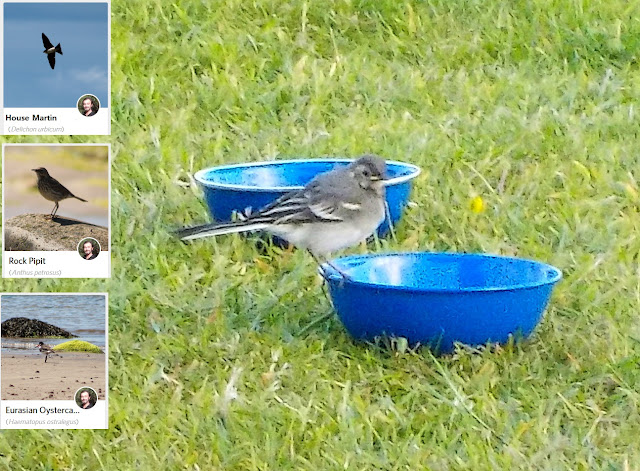 And finally, back at camp, a few more birds to add to our list from yesterday. Firstly, this young Pied Wagtail is being very brave, sipping water from Mattie's bowl, just outside the tent. There are also House Martins flying about, and down on the beach a Rock Pipit and a few Oystercatchers. Tomorrow, we're off to Broddick Castle and we'll take a look around the grounds to see what wildlife we can find there.