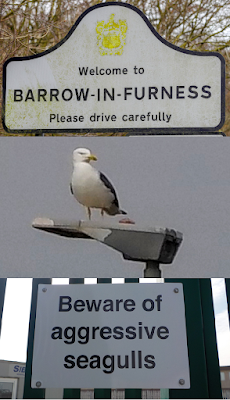 Okay, so beautiful is not the first adjective that springs to mind when you conjure up an image of Barrow-in-Furness, but like most industrial northern towns, it is not without its charms. There is some stunning architecture to be seen, tranquil waterways, and the wildlife has, um shall we say, character. In truth, apart from the occasional “are-you-lookin'-at-me?!” stare, the seagulls gave us no problems at all. I say 'seagull' but scientifically, there is no such bird. This one, for instance, is one of the Large White-headed Gulls of the genus Larus. Probably a Herring Gull, but possibly a Lesser, or Greater, Black-backed Gull. We can't see quite enough detail to be sure and it's difficult to determine the size of a single gull. 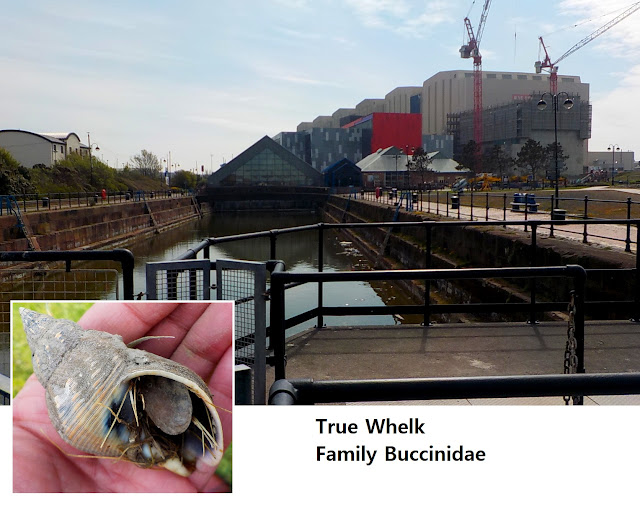 When it comes to heavy industry, it doesn't come much heavier than building nuclear submarines and the massive BAE Systems building dominates the town. Barrow has been building and launching submarines since 1886 and a wander around The Dock Museum (the triangular building, centre) gives a fascinating insight into this little known industry. But back to those gulls. They are carnivores and scavengers, and one of the reasons they appear to be aggressive is that we delight in feeding them. Consequently, they associate humans with food, and don't really care whether you agree with them or not. However, when they're not pinching your chips, they're quite happy to find their own food such as this whelk which I picked up just round the corner from here. There's a lovely promenade walk just behind us, so let's see what else we can find. 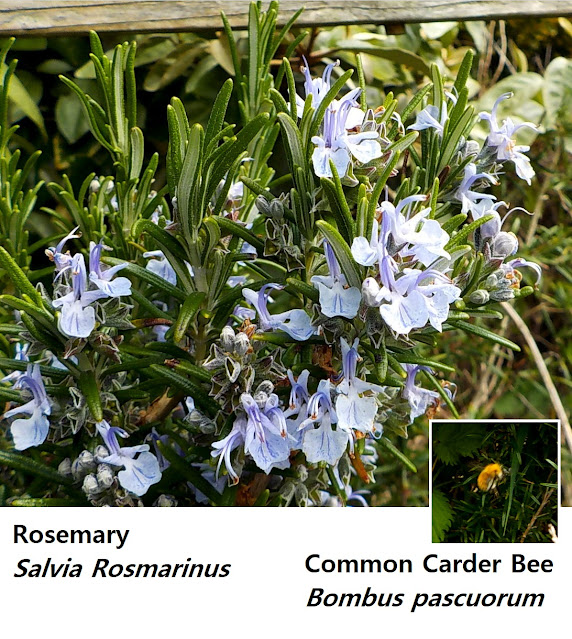 That's a nice stand of Rosemary just there, being pollinated by a carder bee. Rosemary is the herb of remembrance and, for us British at least, forever associated with roast lamb. Personally, my favourite way of using it is in Goat Chops & Rosemary Casserole, the recipe for which you can find in Steve's Wild Kitchen. Carder Bees, (who's name derives from the trade of carding, or combing, wool), comb material into their nests to protect their developing larvae. These days, a carder is someone who steals information from your credit cards. A carder bee has never been known to do this. They are quite easy to recognise from their bright orange thorax. The only other British Bumblebee to share this feature is the Tree Bumblebee which has a white bottom. 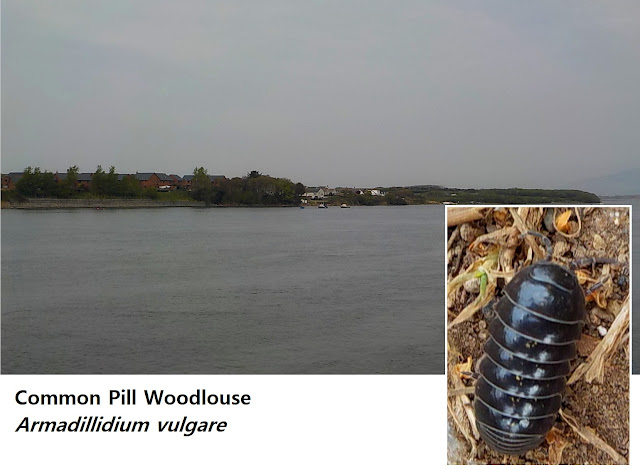 Looking out across the water, we have a good view of Walney Island, a small sliver of land that boasts two nature reserves, which we must definitely visit at some point in the future. Meanwhile, back on this side of the water we have a Pill Woodlouse. Not an insect (far too many legs and no wings), but an Isopod. Isopods have 7 pairs of legs and 11 body segments and most of them live in the water, but woodlice are one of the few that are terrestrial. In America, children keep them as pets. They are covered on pages 66 and 67 of The Quick Guide to Creepy-Crawlies. And talking of books, here are a couple more suggestions for your nature library.

Next week, we're off to the Isle of Arran for a few days, so I'll tell you all about it when we get back. (I see that Mattie has got in before me with this announcement – see Mattie's Page).