Pefki - Top of the Gorge

Last week we were walking down by the White River at Makry Gialos. If we had continued up the gorge this is the village at which we would have arrived. It is called Pefki (or Pefkoi) which means Pine Trees in Greek. The Pines to which the name relates are these, the Turkish Pine, Pinus brutia. Although native to the Eastern Mediterranean, particularly Turkey, you will also find them in Australia and New Zealand and the reason for this goes back a little over 100 years to the 25th April 1915. Aussies and Kiwis will recognise this immediately as Anzac day which commemorates the Gallipoli campaign where many Australian and New Zealand lives were lost. 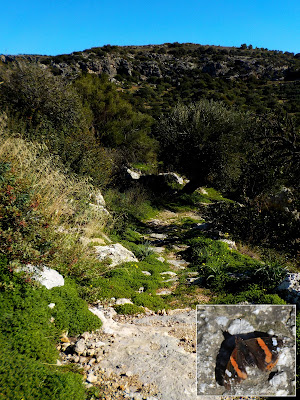 One of the major landmarks of the Gallipoli landings was a lone pine tree and in the aftermath of the campaign soldiers took cones from the battlefield and planted the seeds back home as living memorials to the fallen. Which is why you have Turkish Pines half a world away in Australia and New Zealand.

But to pleasanter thoughts – this is the track down into the gorge and immediately we have an old friend waiting for us on the path. This is the Red Admiral, Vanessa atalanta and it is one of two Vanessid butterflies that often accompany us on our walks in the winter. The other is the Painted Lady, Vanessa cardui and if you remember back to last year when we were coming down the Milonas Valley both species were flitting about all over the place. This winter I haven't seen a single Painted Lady. They are a migratory species that come over on the African winds but this year, not a sign of one as yet. Keep your eyes peeled. 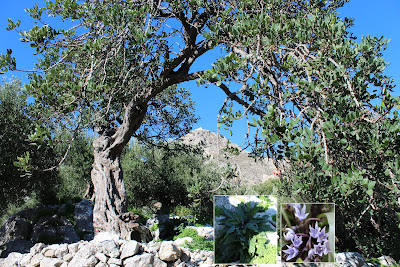 I mentioned the Mandrake in passing last week and here, under this Carob tree is one of the most magnificent I've ever seen. Mandrakes are part of the Nightshade family, a somewhat diverse group of plants containing such poisonous personalities as Deadly Nightshade, Henbane and Thorn Apple as well as the table friendly Potato, Tomato, Aubergine (Eggplant) and Bell Pepper. Which begs the question; how can such diverse plants be grouped together in one family? Nowadays we are using genome sequencing to see who is related to whom but since the 19th century we have been using floral formulae and the formula for the Solanaceae family is this:

This tells us that they have bracts, are actinomorphic, hermaphrodite and more than anyone other than a dedicated botanist would want to know about the number and position of their sexual organs. Fundamentally, plants are grouped together on the basis of similarities in their anatomies which have evolved over time rather than on the basis of how they affect us. In practical terms it means that you can take any flower, determine its floral formula and work out to which family it belongs. 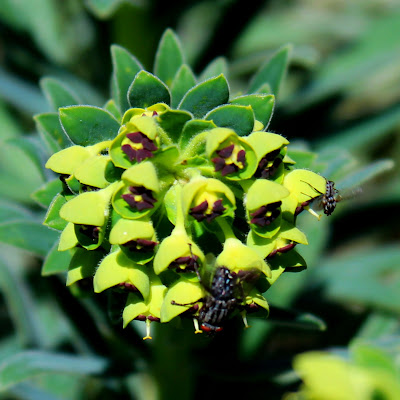 Whilst we're on the subject of flowers come and take a look at this Mediterranean Spurge a moment. Not the most pleasant smelling plant to us but irresistible to flies as you can see. We've long known that colour and smell attracts insects to plants and when the insect goes in for the nectar it gets coated in pollen grains. These are then transferred to the next plant it visits and thus it becomes pollinated. But not all plants are pollinated by insects, some are pollinated by birds, so how do you attract a bird and repel an insect (or vice versa)? Here's the trick. Plants have a gene that controls a protein which determines the shape of the cells on the petal surface. Turned on it produces conical cells which an insect can get a grip on, even in windy conditions; turned off and it produces flat cells that insects just slide off. This Spurge has gone one better. See how the surface is covered in tiny hairs which the flies are using to anchor themselves into position? Perfect target audience marketing – attract them in with the correct fragrance and make it simple to obtain the product. We could learn a thing or two here. After all, flowers have been in the selling game a lot longer than we have. 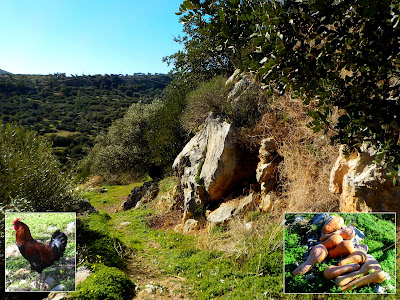 That's enough science for one day I think, let's just mosey on down the track awhile and enjoy the rural landscape. Most people, I suspect, miss this part of the gorge. They're either hurrying down to get to the spectacular rock walls below or thankful to have nearly reached the top if they're coming the other way. But this is really quite an idyllic rural stroll in itself with the gourds out drying in the sun and the chickens ambling about in the winter warmth. Crete, there's nowhere quite like it really. 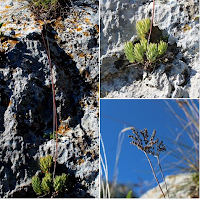 We had rather a lot of plants this week but I've just one more to share with you as it's a type of Stonecrop (Sedum sediforme) which hasn't been recorded in this location before.