The Love Life of Flowers 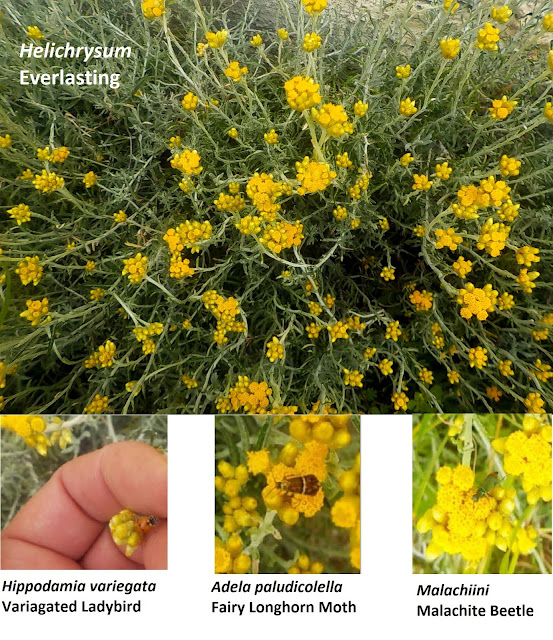 We’ve spent a lot of time with insects, and their close relatives, over the last couple of weeks, so this week, I thought we’d go and have a look at some flowers. We’re still on lockdown, so we’ll stay close to the house, and this one is growing right next to the wall. It’s called ‘Everlasting’, and is quite a favourite with florists. If we cut and dry some, then they will retain their colour and shape for quite a long time. How long? I don’t know; let’s cut and dry some, and find out. Of course, we wouldn’t have so many flowers without insects, (this blog wouldn’t be the same without them), as 80% of flowers are pollinated by them. The other 20% being either self-pollinated, or wind, or water pollinated. Who have we got doing the job here? A Variegated Ladybird, a Malachite Beetle and a Fairy Long Horn Moth. The scientific name for this moth is Adela, meaning graceful and noble. If you are an Adela, or Adele, then this one is for you. 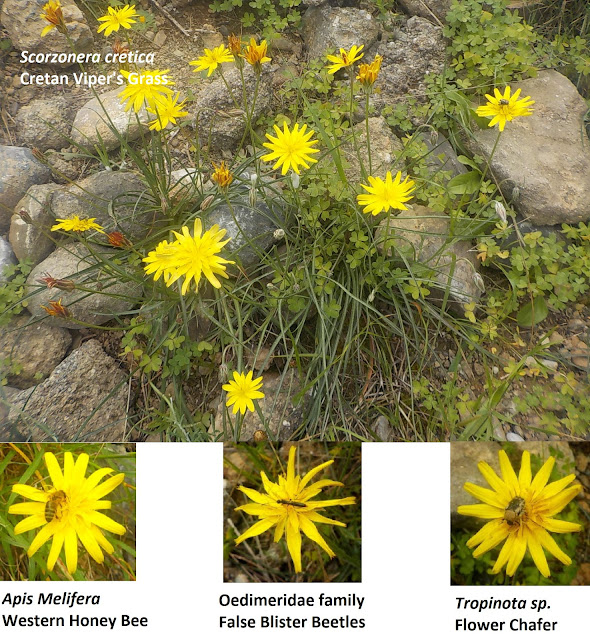 Half-way down the gully, we’re still only about ten metres from the house, and we have an endemic flower, Cretan Viper’s-grass. Possibly so-called, because it was meant to be an antidote to snake bites. As we have no vipers here on Crete, we cannot test the theory, (so you’re excused guinea pig duties for today). These are also insect pollinated, and we have a Flower Chafer and a False Blister Beetle representing the Coleoptera, as well as a Western Honey Bee, from the R&D department, who is obviously working on anti snake-bite honey. Very useful. 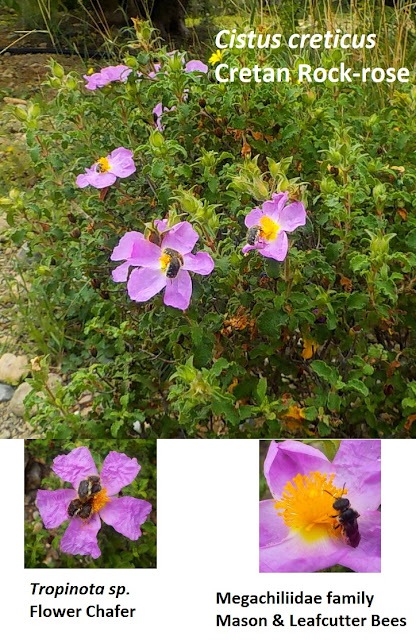 Down at the bottom of the gully, and a full twenty metres from the house, is another endemic, The Cretan Rock-rose. The leaves contain a resin, called labdanum, which has been used medicinally since biblical times. It used to be collected by combing goats that had been wandering about the bushes. Nowadays, the leaves are distilled for use by the perfume industry. For some reason, this bush is absolutely full of Flower Chafers. Six of them, all with their noses in the same trough, on this one. Not much room for that little Mason Bee over there, but she seems to have found an unoccupied spot. 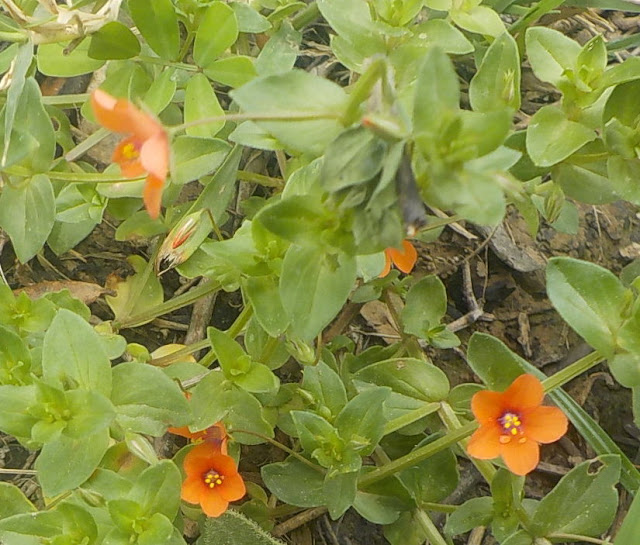 That’s about as far as we dare go, without a passport, but I did notice some Scarlet Pimpernel, spreading along the ground back there. This one doesn’t seem to be attracting any pollinators, and there’s a reason for this: the flowers produce an oil that specifically attracts only bees of the genus Macropis. Whereas, most flowers are pretty promiscuous when it comes to pollination, the Scarlet Pimpernel is ‘demned fussy’. 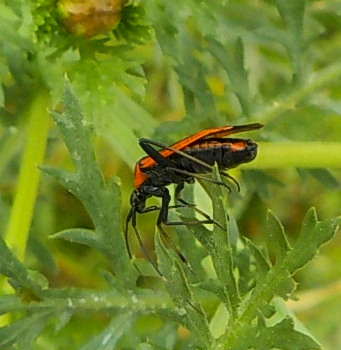 Not all insects that visit flowers do so in order to sip nectar, others go for the sap. Take a look at this fellow going for the stem of a Garland Daisy. Can you see that hypodermic-like appendage, poised, ready to pierce? This is called the rostrum, and it is specific to members of the Hemiptera, or True Bugs. It is also, in my opinion, the easiest way to tell the difference between a bug and a beetle – the beetle has a mouth full of cutlery in comparison.

Which gives me the chance to remind you that The Quick Guide to Creepy-Crawlies is still on offer until the end of this month, and it is full of little tips & tricks, to help you to identify what you see, as well as tidbits of information (such as whether you can eat them!). Order yours today – as they say in marketing.