There are 37 nature reserves in Cumbria. This I know, because when I joined the Cumbria Wildlife Trust, they sent be a very impressive booklet detailing all of them. Thank you CWT, much appreciated. So, today I thought we’d go and explore our nearest one at Dubbs Moss, a mile or two to the south west of Cockermouth. 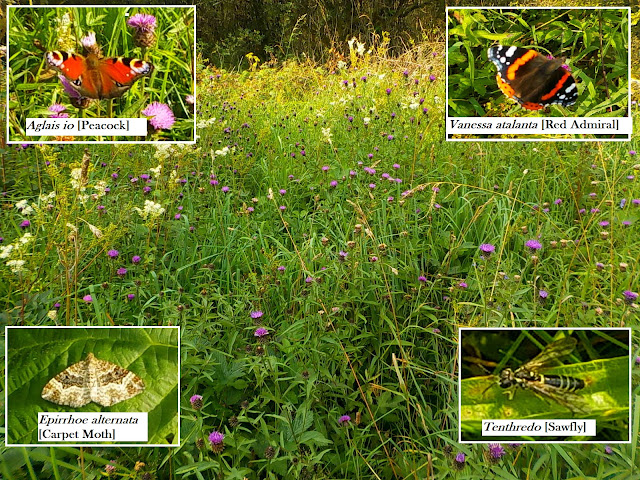 This is a small reserve consisting of three distinct habitats, the first of which, as we enter the reserve, is dry grassland. Meadowsweet, Yarrow and Black Knapweed predominate at this time of year, the latter being the plant of choice for the showy butterflies, such as the Peacock and Red Admiral. These little buff whimsies, flitting round our legs, are worth a closer look too, if we wait for one to settle. Just look at the intricate patterning on this one. This is Epirrhoe alternata, known as the Carpet Moth, which is confusing as the pesky moth who’s larvae eat your clothes is also known as a Carpet Moth (as well as a Clothes Moth) even though it is from a totally different family. The larvae of this little chap feed on a plant called Bedstraw. And while we’re down here… we were talking about Sawfly galls last week [see Urban Oasis], and here’s an adult Sawfly. As you can see, it’s quite wasp-like, but unlike it’s hymenopteran relatives, the bees, wasps and ants, it does not sting. 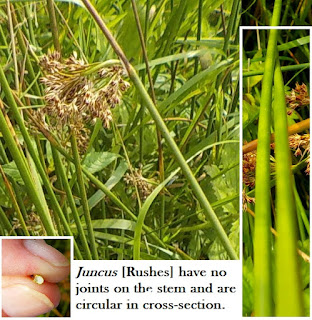 We’ll now make our way down this increasingly puddly path (told you not to wear flip-flops) to the second ecosystem, the damp hollow. We seem to have lost the path markers, but it would appear to be here, on our right, through this gate. I wouldn’t describe it as damp, more of a fully fledged mire. Plenty of rushes, which are really useful plants. They grow all over the world except Antarctica and are used for weaving matting, baskets and chair bottoms and the pith, when peeled, dried and soaked in fat become rushlights. These were much used a couple of centuries back, as a cheap alternative to candles. Rushes can be confused with similar looking grasses and sedges. Here’s how to tell them apart: first, look down the stem – grasses have joints, rushes don’t. Second, snap one and look at the cross-section – rushes are round, sedges are triangular. Simple, when you know how. 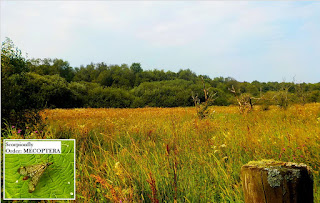 I think we’ll have to turn back as it’s getting increasingly gloopy. Guess what? I’ve just found the trail markers. We overshot and did, indeed, finish up in a mire. Ah well, getting lost is all part of the fun. This is the damp hollow which may have been a tarn, many millennia back, as it conceals a layer of peat, below the overlying decayed plant matter. Plenty of damp-loving plants, as you can see, but I’ve just spotted something to get really excited about, a Mecopteran. A whateran? Scorpionfles and Hangingflies are a couple more of those flies that aren’t flies. They form a group on their own called the Mecoptera and this is the first one I’ve ever seen in the wild (damp hollows being somewhat scarce in arid south east Crete). This particular one is a Scorpionfly and if you look at the back end you can see that it is curled up like a scorpion’s stinger. Don’t worry, it won’t sting you. This is a male, and that’s merely his reproductive apparatus. Apart from damp hollows, the other place you may find scorpionflies is on a murder victim. I kid you not. They have a predilection for human corpses and are often the first to arrive at a murder scene. They hang around for a day and a half which makes them very useful in forensic entomology. If Scorpionflies are on the corpse then the murder took place within the previous 36 hours. (One of the many fascinating facts to be found in The Quick Guide to Creepy-Crawlies) 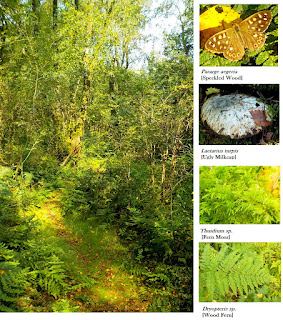 And now it’s into the woods for ecosystem number three. This has a very primaeval feel, what with all the ferns. For ferns have been with us for about 360 million years, some three times longer than flowering pants. Instead of reproducing with flowers and seeds, they use spores, a bit like mushrooms do. Talking of mushrooms, I think that’s an Ugly Milkcap down there. I’m not sure, as I’ve got a lot of catching up to do on British fungi, but it has some of the defining features. For a start, it looks dirty and scruffy, with debris sticking to the top of it. It’s the right size, between 3 and 8 inches across, and it likes mixed woodland, particularly where there are birch trees about, as there are here. We came in with a couple of butterflies and we’re leaving with another one, the Speckled Wood. These are beautifully dappled, like a fawn, which is perfect camouflage in the scattered woodland light – provided you don’t perch on a well illuminated fern. Notice that the markings here in northern England are quite a pale, primrose yellow. In Crete, where the sunlight is a lot stronger they are a deep orange. If you look back to Over The Ridge you can see the difference (and learn a bit about their sex lives). 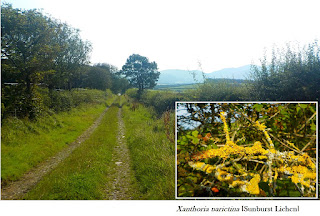 That was Dubbs Moss. A pleasant stroll back now alongside the field and down the farm track, where a nicely positioned tea room awaits. But before we refresh ourselves, I’d just like to draw your attention to this yellow stuff growing along the branches in the hedgerow. Neither animal, vegetable or mineral, it’s lichen, a strange combination of fungi and algae or cyanobacteria, living together as a single organism. If you look closely, you can see the pixie-cup fruiting bodies of the fungal part. Incidentally, an aqueous extract from this particular lichen, Sunburst Lichen, Xanthoria parietina, has proved effective in the lab against the parainfluenza virus that causes croup, as well as other respiratory diseases. The moral of this tale being; look after your lichens – one may turn out to be the answer to a certain other virus that is currently doing the rounds. 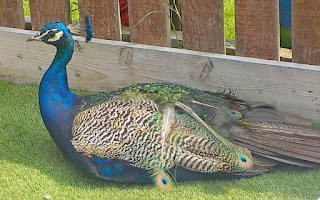 Cup of tea and a toasted teacake do you? I have just realised that we haven’t mentioned any birds this week. Continuing on from last week’s natter about pheasants, here’s another bird of the pheasant family, the peafowl. These are tame birds at the tearooms – their wild relatives are native to the Indian subcontinent. The males are peacocks and the females are peahens and some, just like us humans, decide to change sex half way. Having both male and female characteristics (Gynandromorphism) is more common in nature than you may think. It occurs a lot in the insect world, particularly with butterflies and moths, but also with crustaceans such as crabs and lobsters, as well as in fish and birds. It all depends upon how the chromosomes split during the early stages of development… and that’s the way the toasted teacake crumbles.

Until next week,
Stay safe and be happy,