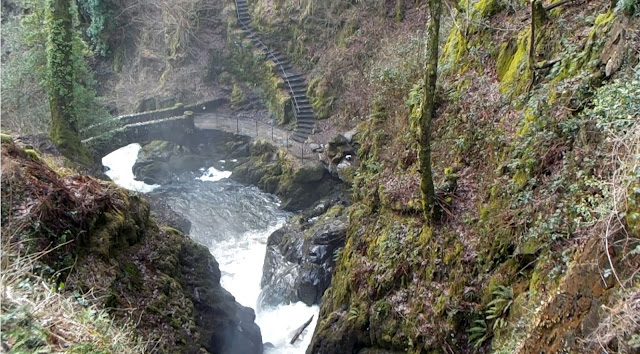 Long ago, in days of yore

But fell right in

And what is more

Okay, so Wordsworth may have penned a better poem about the tragic love of Aira Force in his The Somnabulist of 1833, but mine's shorter and you get the gist.

This is the famous Aira Force, the upper part of which we'll be exploring today, along with our Intrepid Local Guide and Jack The Navigator Hound. Force is a northern English word for a waterfall and comes from the Old Norse 'fors'. Aira is also Scandinavian in origin, it is the feminine form of Airi, the messenger or herald. I'm not sure what the message is, but it's a very loud one. No words can describe the sheer power of the water as it cascades down the mountainside, through echoing rock chasms, at this time of year. 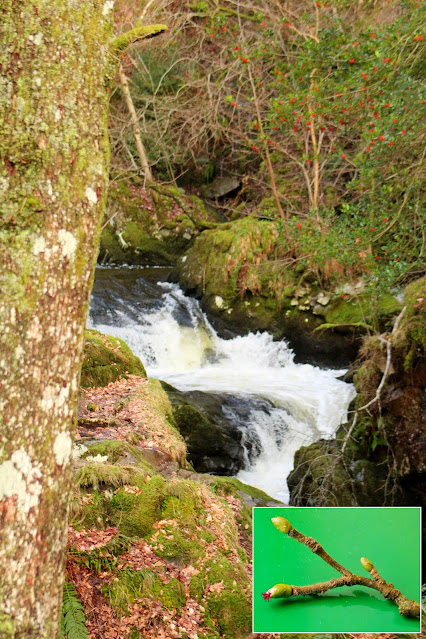 Leaving Emma and Aira aside for one moment, there are a couple of other girls up here, Holly and Hazel, that are showing signs of life. There's Holly on the far bank, producing a wonderful crop of scarlet berries, whilst over here, Hazel is coming into flower. In last week's Frozen! We saw that the male catkins of the hazel tree had arrived to greet the coming Spring, and now the tiny red female flowers have come out to join them. We'll have to wait until September or October though, to enjoy the fruits of their union.

Holly and Hazel are both flowering, vascular plants. That is, they reproduce via seeds (nuts in the case of Hazel and berries in the case of Holly) and they conduct water around their tissues via substances called xylem (which transports water from the soil to the stems and leaves) and phloem (which transports the sugars manufactured during photosynthesis to wherever the plant happens to need them at the time). Ferns, like this Common Polypody, which you can see growing on the trees, are non-flowering, vascular plants. They also conduct water around their tissues but reproduce using spores, much like mushrooms do. As you can see, there is also plenty of moss about (which we also looked at in last week's Frozen!). Moss is a non-flowering, non-vascular plant. It simply soaks up water but has no means of actively transporting it. 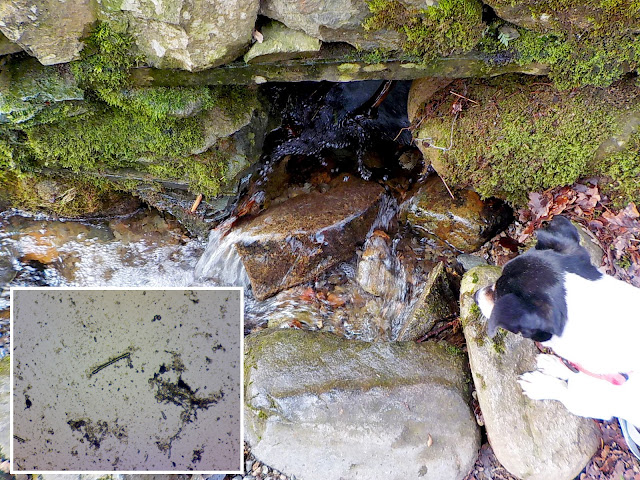 Going further back along the evolutionary scale, as it were, we come to the unicellualar algae which, among other things, are responsible for making rocks slippery (otherwise they'd just be wet). Diatoms, in particular, (which we met earlier this month when we went Half Way To Sunderland) produce slime to facilitate locomotion when they want to move, and to stick themselves to things when they don't. Very useful stuff, slime, unless you're trying to walk over slippery rocks, of course. It is the diatoms and other unicellular organisms that provide the very basis of the food web which makes all the rest of life on Earth possible. Under the microscope, watching these tiny bundles of life, ponderously grazing like sheep or whizzing around like flies, is truly mesmerising.

I hate to tell Jack, but if he's waiting for the food web to evolve into something more meaningful, he's going to be there an awful long time. 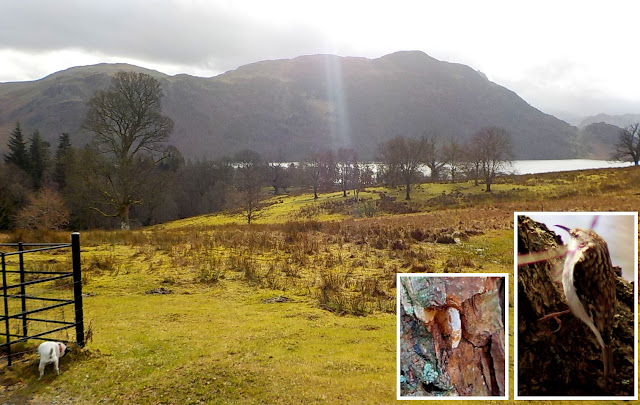 Aira Force finishes its hectic descent at Ullswater, which I'm sure we'll explore at a later date. Meanwhile, it's a beautiful location to sit and have lunch. There's a Tree-creeper making his way up that tree, just there, using his legs and tail in a sort of tripod arrangemnet for extra stability. Notice the curved beak for getting in behind the rough bark of the tree. If I just prise a bit of bark off here, I can show you what he's looking for – pupating insect larvae.

Someone asked me recently, in the Naturalists Facebook group that accompanies this blog, “How can I become a naturalist?”. The answer I gave was simple: “Never grow up. Continue to see nature through the eyes of a child and always ask: What's that? What's it doing? Why is it doing it? Everything else will follow.”

That's all for this week but if you visit my webpage at Steve's Nature Plus I've made a video of Aira Force so that you can see it in all its glory.