Do you ever feel wound up like a watch spring, your mind full of worries and angst that you just can’t seem to let out? We all do at times and what we need is catharsis – a process of releasing repressed emotions. Some people use music, others something physically demanding but today I’m going to take you up to a plain in the Dhikti mountains called Katharo, which means “pure” in Greek, and is the very origin of the word catharsis. So let us stroll along the little tracks that wind between the fruit trees,  criss-cross the two small rivers and breathe in the pure mountain air.

In spring the plain is a vision of wildflowers but even at this time of year there are still plenty of interesting plants to see such as this Spiny Restharrow down by your foot. This used to be widespread in Europe but is becoming increasingly rare as it cannot tolerate the fertilisers which we liberally strew across our agricultural land; but this of course is Katharo, the pure plain, and fertilisers, pesticides and herbicides are not much in evidence here. It’s a useful wee plant as well – take that as you will - , having been used since Dioscordes day as a remedy for minor urinary problems, and dried root extract continues to be sold to this day by herbalists.

Along with the flowers we have the butterflies and I’ve seen representatives of at least four families so far. Now the old English family names used to confuse me mercilessly. We had the Whites (Pieridae) which included yellows; the Browns (now included in Nymphalidae) which included an assortment of colours; and these, the Blues (Lycaenidae) which included some brown butterflies. Telling these little blue butterflies apart can be very tricky, particularly when they’ve been attacked from the rear as this one has. Some have ‘tails’ which can assist with identification (see The First Eden) but if this one had then he’s lost them. The best way to identify small blue butterflies is to catch them with their wings up as the patterns on the underside are all different. There’s one look – see if you can snap him. Hmm, a bit tatty but it looks like a Common Blue, Polyommatus icarus, if you want the scientific name.

Whilst we’re down here on our hand and knees in the miniature world of insects I see we have a delightfully shiny beetle crossing the path. It’s a type of beetle called a leaf beetle, a very large group with different species often being associated with specific plants. This one for instance likes to lay her eggs at this time of year in the leaves around the base of St. John’s Wort, a plant that became so troublesome in Australia in the 1930s that they brought this beetle in to control it. One night in the spring a couple of thousand eggs will begin to hatch and the ravenous larvae will devour the basal and developing leaves before pupating in the soil and emerging as adults in the summer.

Talking of ravenous (no it’s not time for lunch yet – I do think of things other than feeding my stomach sometimes) can you hear that strange ‘cronking’ sound above us? That is the distinctive call of the Raven whose legendary appetites introduced the word into the English language back in the fourteenth century. A pair of them, look, up there in the clouds. Ravens are corvids (from the family Corvidae) like the Hooded Crows that we were watching at play while we were at the Porto Belissario last month and go one better than crows in the play stakes. They have been observed making toys out of twigs to play with. Great problem solvers and (we think) able to talk to each other about what they found a couple of miles away earlier in the day, they really are the Einsteins of the bird world. 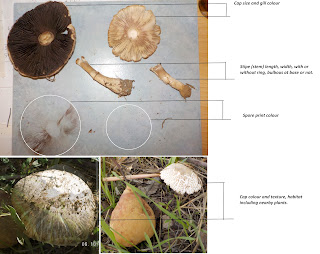 We’ll wend our way back to the village now but keep your eye out for mushrooms like that one sitting by the edge of the path. I expect we’ll look more closely into fungi identification at a later date but for now here are a few tips regarding what to make a note of to identify them:

1.      Cap colour, size, shape, gill colour and smell (some are very distinctive).
2.      Stipe (stem) colour, length and breadth, whether they have a ring and whether they are bulbous at the base.
3.      Spore print colour (leave the cap upside down overnight on something blue or grey).
4.      Habitat including any nearby plants, particularly trees, with which they may be associated. 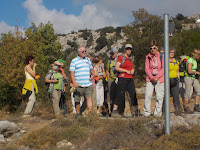 And now a final treat. I’ve arranged to meet up with our friend Steve Lenton who’s been guiding a group of Swiss nature lovers around the plain. We’re meeting at Yannis and Despina’s taverna where we’re not only assured of a good lunch but with a bit of luck Yannis will show us his bones. You’ve not heard of Yanni’s bones? He’s only got a collection of ancient fossils of dwarf elephant, hippo and mammoth which he found here on the plain. Nothing like a bit of pre-prandial palaeontology to whet the appetite, come on!


If you’d like to arrange a walk around the Katharo Plain with Steve Lenton (and myself if you’d like), here is the link: http://www.exploringkatharo.com/