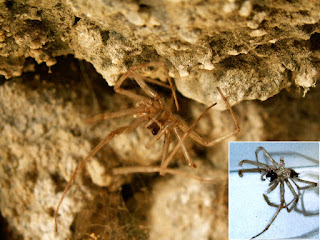 Just before we begin our push for the summit there are a couple of other little things in this cave that I’d like to draw to your attention. This apparently dead spider up here for instance. As a spider grows it gets too big for its skin but unlike us its skin is its skeleton and although it is flexible enough to allow the spider to move it doesn’t grow like our bones do. Periodically then a spider needs a new skeleton. How it does this is to start absorbing the inner layers of its existing skeleton and use that to start growing a new skeleton inside. It also produces a fluid to keep the old and new skeletons apart. There is an obvious flaw in this arrangement in that the new skeleton must necessarily be smaller than the old one (like Russian dolls) which obviously defeats the object. Undeterred by this drawback, the spider reabsorbs the separating fluid so that the new skeleton is loose within the old one, pumps itself up until the old skeleton cracks and then bursts out. This new skeleton however is extremely soft and flexible and also folded to some extent. The spider then undergoes a growth spurt to inflate the new skeleton to its maximum before it hardens. Result; one new, bigger spider and one discarded skeleton like this one here. 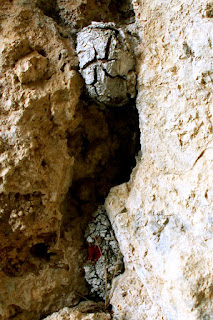 The other things are these curious looking objects growing in this crevice. If I just cut a bit of the surface off with my penknife…ooh, look, it’s like Turkish Delight inside. My guess is that it’s one of the Pannariaceae family of lichens. We’ve discussed lichens before of course in A Kingdom In The Pine Woods but I don’t think I mentioned that they come in eight different forms. The commonest are foliose which have a leafy appearance, crustose which are crusty, and fruticose which are branched in a fluffy, thready sort of way.  This one has flat, overlapping scales if you look at it under the hand lens, see, which is one of the less common, squamulose types. Lovely word isn’t it? The other four types?  Placodioid, leprose, filamentous and those with no visible thallus. Well, you did ask. 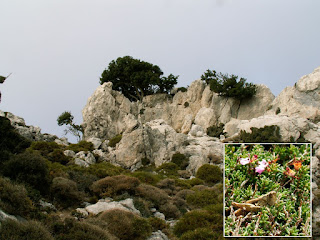 I’m sure we haven’t exhausted the possibilities of this little cave but we’d better get on or we’ll never reach the top. Last week we were discussing how the rocks and minerals help to define the character of an ecosystem.  What we’re trundling up now is known as karst and it’s formed when rain dissolves the limestone. All rain is slightly acidic as water reacts with the carbon dioxide in the atmosphere to produce a weak solution of carbonic acid. The more CO2 there is in the atmosphere the more acid the rainwater becomes. Add in a few industrial pollutants such as sulphur dioxide and various nitrogen oxides and you have the problem known as acid rain which has an adverse effect on virtually everything you can think of. Some plants, like this heather (Erica manipuliflora) for example, positively thrive on acidic soils which is why there’s so much of it around. I’ve just thought of something: the girl’s names Heather and Erica mean the same, it’s just that Erica is the posh version and Heather is common. Moving on. There’s a little grasshopper in that patch there, see if you can catch it. Too slow. Still, he’s more used to bouncing around at this altitude than we are so you’re excused. 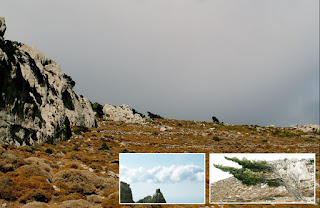 Whilst we’re on the subject of rain have you noticed what’s heading towards us? That’s thick, black nimbostratus cloud to the north whereas if you look over your shoulder to the south, that’s fluffy, white cumulus cloud. The wind is picking up too as you’ve doubtless noticed and it’s blowing north to south. This is obviously not unusual up here as you can see by the shape of the trees; they’re growing practically horizontally and pointing very decisively due south. I reckon we’ve just about got time to get round these rocks to our left, breast the crest, and then it will be time to get off the mountain. Weather plays a big part in what lives and dies up here and we don’t want to be among the latter. 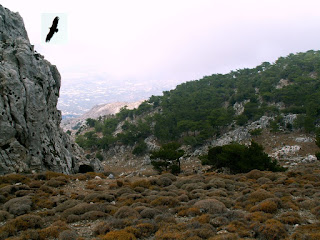 We’ve made it. All the way from the sea at Agia Fotia right up into the heights of the Thriptis mountains overlooking the village of Monistriaki. The other white rectangular blobs you can see down there are greenhouses. Agriculturally, Crete is a very productive island; not just the olives and olive oil for which it is justly famous but tomatoes, peppers, cucumbers and aubergines are all being grown for the tables of Europe in those unsightly edifices. At these heights we’re very much in vulture territory and that one wheeling about up there is a Griffon Vulture. Massive birds with wings that could cover any one of us laid out on the floor. They were in decline in the nineteenth and twentieth centuries, mainly through eating poisoned bait, but this century, thanks to conservation efforts, they seem to be bouncing back which is good news. It’s getting a bit chilly up here now. Thankfully the rain seems to have held off but we’d better not push our luck – we’ve got a long walk back. 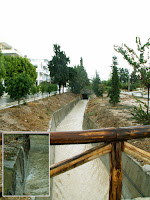 Told you it was going to rain didn’t I? Ok, so I didn’t predict a hurricane but technically we didn’t have one; we had a medicane which is a horrible portmanteu word (Mediterranean + Hurriccane). They are rare events but predicted to get less frequent if more intense as the climate warms. We didn’t have it too severe down here in the south east but the normally dry gullies of Ierapetra had a thorough clean out. Wikipedia has a whole page devoted to them: https://en.wikipedia.org/wiki/Mediterranean_tropical-like_cyclone