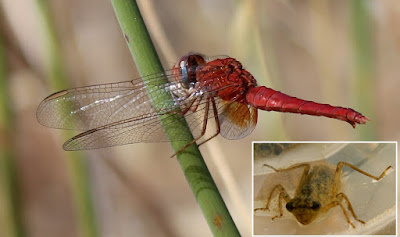 One of the loveliest sights of the summer has to be the dragonflies like this beautiful Scarlet Darter sitting on a fennel stalk. They are quite distinguishable from other red dragonflies by the orange flash at the base of the wing but have you ever wondered why we associate dragonflies with summer? Well, there isn't quite so much flying about for one thing but mainly it is because the majority of dragonflies are busy in the other seasons developing from an egg into a nymph, a process that takes place in freshwater where they look very different as you can see. 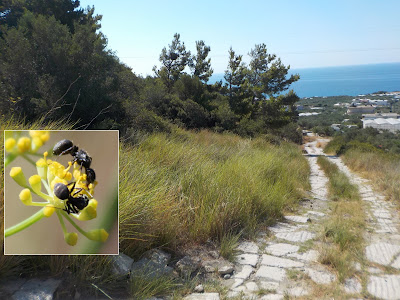 Ants are still about of course and the grasshoppers are skittering around our feet but generally anything with any sense goes into aestivation round here in the summer and with temperatures hovering around the 40C mark it's only mad dogs and Englishmen (like me) that go out in the midday sun. Thankfully our journey is all downhill from now on.

Many insects of course draw a substantial part of their diet from flowers and they are few and far between in the summer in Crete because there is such a scarcity of water in the summer months. 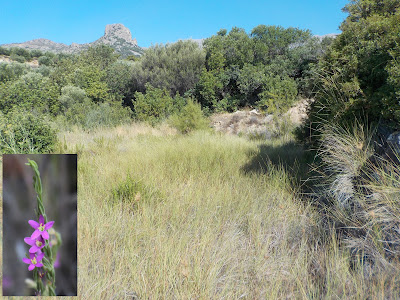 However, I see a few reeds off to our right which means there's a little dampness about so we may find the odd wild flower about if we get down on our hands and knees. This little beauty is Lesser Centaury named after the centaur Chiron of Greek myth. Chiron was known for his skill with medicinal plants which is strange for, as far as I know, Centauries have no medicinal properties whatsoever. The grimoires suggest that burning it will ward off snakes but there again I should think that setting fire to anything would have much the same effect. 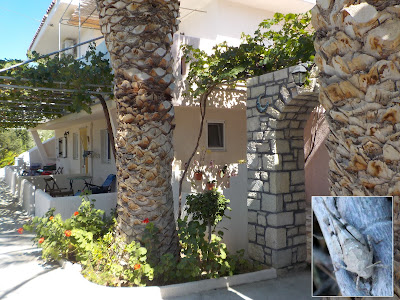 What else can we find down this hill? Aha, I said that there were plenty of grasshoppers about. Just look how well camouflaged this one is against this grey stick. He's hiding his true colours, his hind wings are bright blue as you can see if we just persuade him to fly off. Incidentally, this set of apartments is called La Luna Blu and it is Italian run so if you're Italian, fancy a holiday in Ferma but are worried about not being able to speak Greek this is probably just the place for you. 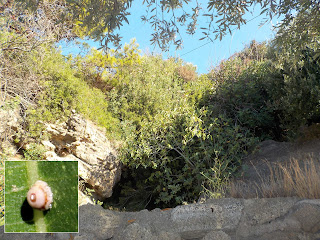 Ok, so you think you know what an insect looks like? What do you make of this little lady? Yes, she is an insect, a female wax scale insect to be precise. So, where are the six legs? Scale insects are really weird. When they first hatch from the egg they have six legs and are known as crawlers but both species quickly metamorphose into something resembling a white fish scale (hence their common name). The females then grow in a series of moults until they look like this. Males on the other hand undergo complete metamorphosis and after pupating emerge as a six legged winged insect which we would all recognise as such. The males only live a day or two in the adult form, just long enough to mate with a female scale insect (and I can't help feeling that most of that time must be spent in working out how to mate with a female scale insect). As I say, scale insects are seriously weird insects.

Now, if we just trundle on down this hill and turn right at the bottom we'll come to the oasis that is known as Katerina's, a lovely little taverna where something cool and refreshing awaits.

In How to be a Naturalist – Anywhere the last item was about the bats at Ierapetra hospital. I have now processed a short video of them flying at dusk which you can view here:https://youtu.be/U6BvgfUdCdo

Talking of Scale insects, I found some new ones at Ierapetra Hospital. As far as I can make out these are Red Gum Lerp Psyllids (Glycaspis brimblecombe) which infest Crete's only (naturalised) Gum Tree, the River Redgum, Eucalyptus camaldulensis.

This is the link for La Luna Blu