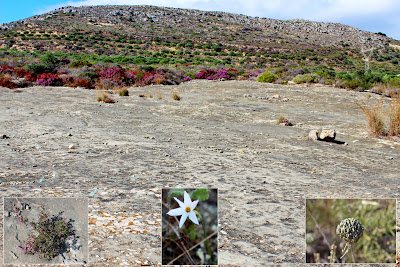 In previous weeks we've been back in time 800 years and joined the Venetians in their hill fort at Monte Forte and 2,000 years with the last of the Minoans at their place in Praesos. This week we're going back over 20 million years into the geological past to a beach that you will no longer find in any good beach guide to Crete. Lift a little patch of this massive slab of rock with your fingers (which is surprisingly easy to do) and you can rub the sand away from the underside with your thumb. It's covered with various lichens on the surface but let's go up and see what plants have colonised the edges. Plenty of Heather, as you'd expect on a sandy soil, and down among the roots some beautiful little autumn flowering Narcissi. We also have some spherical heads of Alliums. Garlic, onion, chive and shallot are all Alliums and we have about fifteen different species growing wild here on Crete. As to which these are I'd have to check with our botanist friend, Steve Lenton who is a man who really knows his onions. I never could get the hang of them: when I was a young man I disappointed my future father-in-law by confusing his onions with his gladioli but in fairness his vegetable plot did abut his flower border. 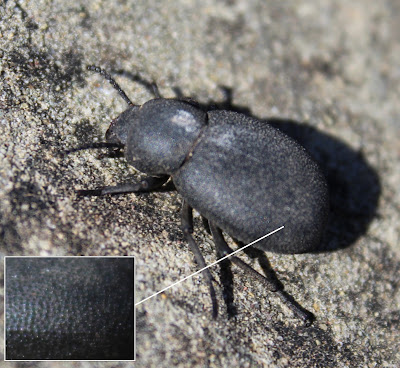 We also have plenty of stones and rocks for flipping which, as you know, can keep me amused for hours. Oh look, our first beetle of the autumn. In fact, this is quite a rare one called Pimelia minos, which is endemic to this end of the island and fairly easy to recognise as his back has the appearance of avocado pear skin. I've only come across this species twice before; on Koutsounari beach and at Bramiana resevoir. Pimelia may be a rare species but he is one of a group of 20,000 or more Darkling Beetles that can be found worldwide very often in dark places such as under stones which gives them their common name. 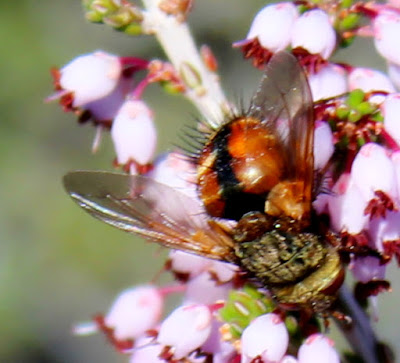 Now who do we have here pollinating our heather? This is one of the Tachinids, a rather bristly bunch of flies as you can see. They have a tendency to lay their eggs in the larvae of other insects, particularly the caterpillars of butterflies and moths, but some prefer adult beetles or their larvae so it's no wonder our Pimelia friend likes to spend his time hiding under rocks. So would I. 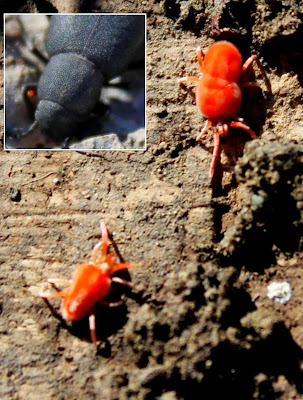 I've found some old bricks over here. Let's rummage. You've got some little orange dots moving about on the bottom of that one. Here, take the hand lens and tell me what you see. They're sort of peachy? Nice. How many legs have they got? A very small, eight legged creature with peachy skin. May I take a look? What you have there is a Red Velvet Mite, quite pretty in their own way but rather predatory when they are adults. In their earlier life stages however they are parasitic on other insects. I've just found another Pimelia over here and look what's nestling in the crook of his front leg, a little velvety orange dot. Poor old Pimelia, he's not safe anywhere. 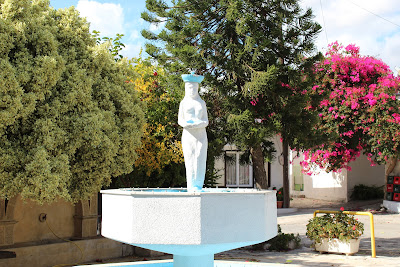 Well, what do you think? Quite a lot of life for a bare stone slab isn't there? But there's another strange creature that I want to introduce you to and you'll be pleased to hear that it is best observed from a small taverna in the nearby village of Sikia. You'd have thought that with so many wonderful creatures in the world there would be no need to make them up but mythology is full of them such as that lovely mermaid over there. If you are crossing the Aegean in a boat you may meet up with Alexander the Great's sister, Thessalonike, who was turned into a mermaid after her death. If she asks after her brother tell her that he's alive and doing well. This seems to pacify her. If you tell her he's been dead for centuries she gets all upset and starts churning up the waters. 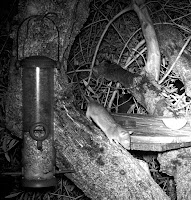 The trailcam has been busy photographing Great Tits and Italian Sparrows galore during the day but this little fellow appeared overnight. He's a Black Rat, Rattus rattus. I'm not too worried about the occasional Brown rat around the garden but I'm not so keen on having the black ones about. However, as the trailcam also picked up three different cats investigating the bird table at night it is hoped that he won't stick around too long.