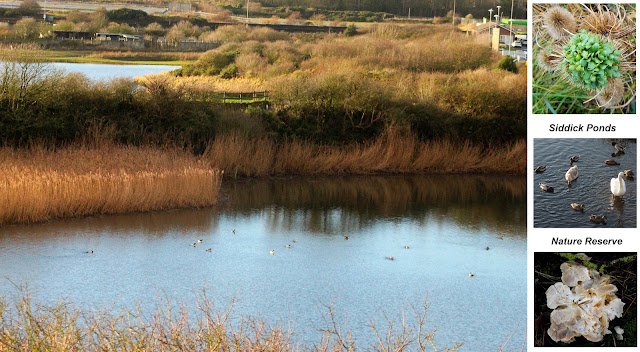 We haven't been to a nature reserve for a few weeks so let's head out to Siddick Ponds, a local nature reserve, just to the north of Workington. Apart from the waterfowl, I'm sure we'll find some interesting plants and fungi and maybe even the odd creepy-crawly, if we're lucky. 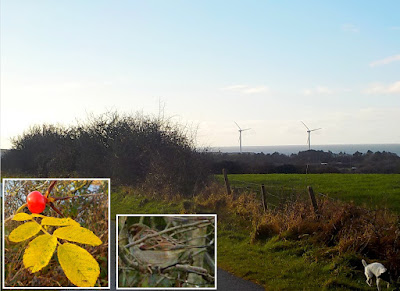 We'll walk over to the ponds from the village of Seaton because there's a lovely walk, bounded by hedgerow, along the course of the old Cleator and Workington Junction Railway which carried coal and iron as well as limestone back in the 19th and 20th centuries. The times, they are a-changing and the coal mines are now closed with our power needs increasingly being provided by the wind turbines you can see over there. There are plenty of small birds about, particularly blue tits, sparrows and the ever present robin and plenty of hips and haws, providing winter nourishment. This big, red hip, I believe, is what is commonly known as a beach tomato although it is actually a rose hip and it looks to be Rosa rugosa, a particularly salt-spray tolerant rose, brought over from Japan in 1796 and now considereed an invasive species of northern European coasts. Talking of invasive species, I see that Jack the Navigator Hound has managed to sneak into shot again. This blog is getting a definite 'Where's Wally?' feel to it. 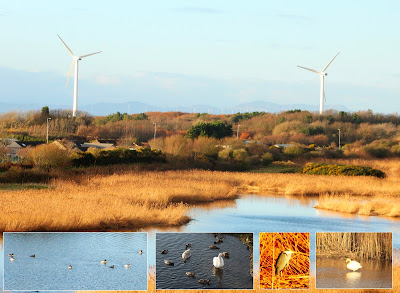 Here we are at the ponds, which incidentally, were created when the railway embankment was built up, and we have a fair few birds to look at. Out in the middle we have some Merganser and Wigeon; closer to the path (looking for humans with food) we have Mallards and Mute Swans; no less than four grey heron, dotted around the margins; and out on its own, taking social distancing to extremes, a Whooper Swan. These fly in for the winter, mainly from Iceland, so I'm told and are recognisable by their beaks which start yellow and then change their mind half way and decide to be black for the business end. The Bewick's Swan is similar but has more black on its bill and overall is a smaller swan with a more rounded head. 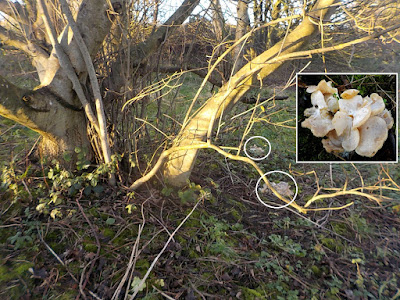 Aha! I see we have more mushrooms under this tree. They look to be Oyster Mushrooms of some kind (see Into The Woods Of Portinscale). The lab is nearly ready back in the Old Cornmill so we'll soon be able to take specimens and identify our fungi with a grgeater degree of certainty. I'm particularly keen to find some oyster mushrooms within walking distance of the mill as, apart from being rather tasty, they contain lovastatin which reduces LDL cholesterol (although how many oyster mushrooms you have to eat to get an effective dose is another matter all together!). 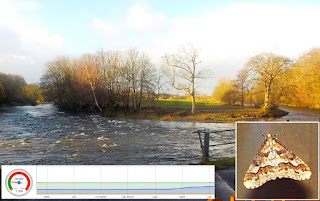 We've found birds, plants and fungi but alas no insects or their friends. However, I did have a visitor to the mill the other night in the shape of this Mottled Umber Moth, Erannis defoliaria which came to the kitchen window. A quick tip for photographing moths and other insects on windows: go round the other side and prop a bit of cardboard behind it. It helps the camera decide where to focus. The river is still behaving itself but beginning to rise as we've had a fair bit of rain on the fells over the past couple of days. No flood warnings as yet though. 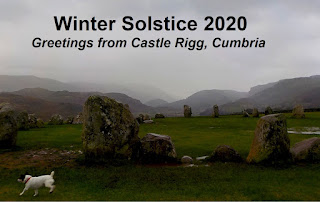 All that remains is for me to wish you all a Super Solstice, Merry Christmas, Happy Hanukkah, or whatever else you may be celebrating at this time of year, however limited those celebrations may be.

See you all in January,