A Fjord By Any Other Name - Solway Firth 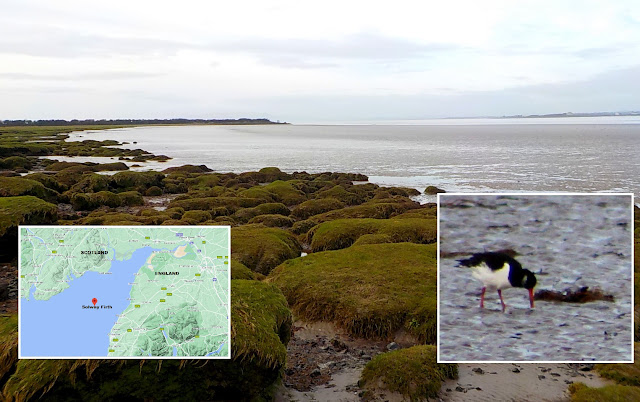 Wrap up warm. It's bitter out there and we're off to the coast. In particular, to the eastern end of the Solway Firth, an Area of Outstanding Natural Beauty. England lies on one side of the firth (which is cognate to the Scandinavian word fjord) and Scotland lies on the other. There's an RSPB Nature Reserve which we'll pop into, but first, let's just take a little walk along the shore and see who's about. I think we'll leave the splashing about in the rock pools until it's a bit warmer, but in the meantime, we've a flock of Sea Pies probing the mud flats. That's an old name; for the past few hundred years we've known them as Oystercatchers (Haematopus ostralegus). Individual birds have different bill shapes, depending on their preferred diet. Those who like worms have pointed bills, those who incline towards molluscs, including oysters, have flatter bills for prising them open. Evolution in action? 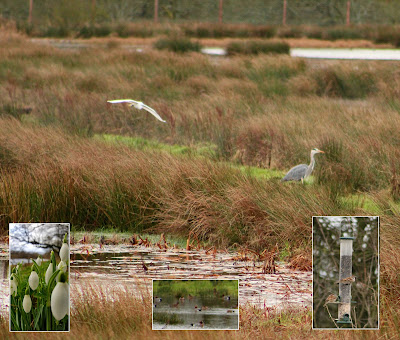 This is Campfield Marsh Nature Reserve. Probably be quite nice when it's finished. For the moment though, it mainly consists of one long track, bordered by thick hedgerow, which effectively blocks all views of the scrapes where the birds are. There are a few view points, but betwixt them and the scrapes, there is a long electric fence which the camera has no problem in focusing upon. All we can see from here are distant blobs on the water, which I'm pretty sure are birds. However, there are some magnificent viewing hides... which are closed due to Covid restrictions. This one at the end of the track appears to be unlocked... so I suggest we don't sit in it for half an hour and warm ourselves up, out of the biting wind. Oh, another couple have turned up with a picnic.

“No, we don't mind if you don't sit in the hide with us, just keep to the far end. There's a grey heron out there, and a Little Egret just flying in to join him.”

Back to the car, I think. I can't feel my fingers on the camera controls. Our intrepid local guide has just gone to photograph the first snowdrops of the season, so I'll just snap these house sparows on the feeders in the car park. Even Jack the Navigator Hound is shivering and seems disinclined to photobomb this week.

News From The Old Cornmill 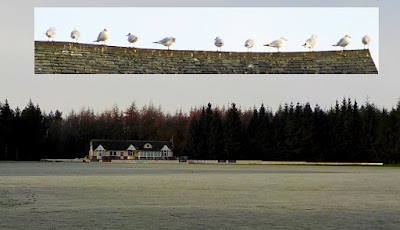 Earlier this week, I decided to take a stroll over to the nearby cricket ground: The pitch is frozen, but I look forward to the occasional summer Sunday afternoon, relaxing back to the sound of leather on willow. A group of Black-headed Gulls in winter plumage (hence no black heads) are posing at various angles to give 360o identification. What I'd really like to do, is get into those woods back there and view the river from the opposite direction. 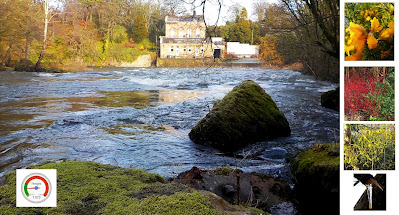 Hmm, not sure that it's actually a public right of way, but we're here. Some beautiful colours in the harsh winter sunlight. The gorse has a golden glow, the Red Osier Dogwood is particularly striking against the deep green Holly and even the Mistletoe (sadly, uncollected this year, for obvious reasons) is a vivid pale green. Look at the way the sap has run down to the base of that icicle. Here we are, at the river. The building opposite is The Old Pump House. The Old Cornmill is just to the right, obscured by those bushes. The river is at mid level at the moment but Storm Christoph is due to arrive. At present we are only under a general Yellow alert but I'm glad that the flood defences have now been fitted. I'll keep you posted. 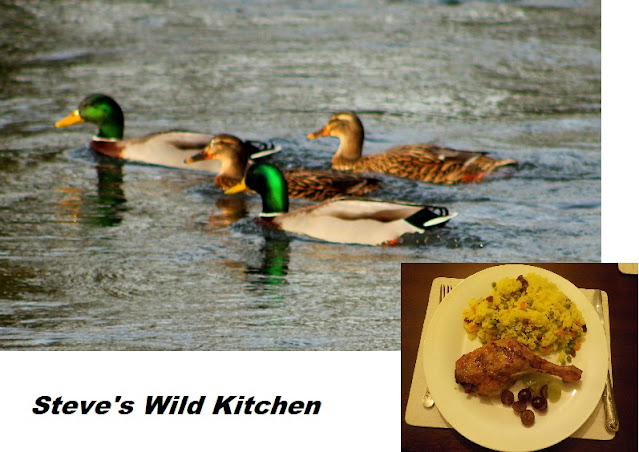 The kitchen at The Old Cornmill is now fully functioning to my satisfaction, so It's high time for some more recipes from Steve'sWild Kitchen starting with Crispy Wild Duck and Spicy Jewelled Rice. You cannot go out and shoot ducks in the UK any more as all wild birds and their nests are protected by the Wildlife and Countryside Act 1981 but you can still legally hunt them down in supermarkets which is where I tracked mine down (near the chicken section). The ducks are farm bred Mallards, just like these on the river. Recipe here.