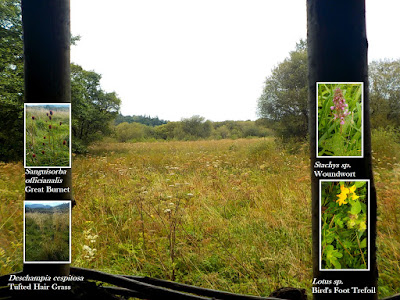 We’re off to explore another one of Cumbria’s small Nature Reserves today, Dubwath Silver Meadows, at the northern end of Bassenthwaite Lake. This is a wetland reserve which has been thoughtfully laid out with cinder paths and duckboards made from recycled plastic and, as far as I can tell, it is wheelchair accessible.

We’ll make a start by walking alongside the hay meadow and around the snipe bog. Whether we’ll see any snipe or not is debatable as they are very well camouflaged and have nerves of steel. They’ll keep very still amongst this tall Tufted Hair Grass and let you pass within a couple of feet without moving a muscle. You practically have to step on their tail feathers before they spook, and then they take off like a rocket. Looking at the wetland flowers in amongst the grass I see that we have Great Burnet; some species of Woundwort, probably Marsh Woundwort, which can help promote the healing of wounds (any plant with wort in it’s name is a traditional healing plant); and Bird’s Foot Trefoil which is one of the host plants for the caterpillars of the Wood White butterfly. 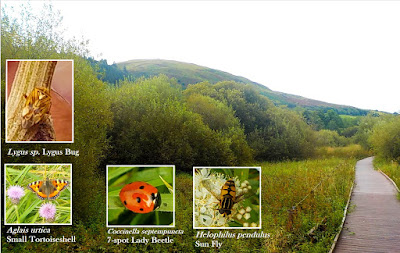 We also have various thistles, which the Small Tortoiseshells are enjoying; Meadowsweet, which is attracting the Sun Flies (a type of Hoverfly) and, sadly once again, the 7-spot Lady Beetle is the only beetle to be seen. We do however have a bug, a true bug that is, being a member of the order Hemiptera, rather than the generic use of the word bug to describe any invertebrate. True bugs, like this beautifully marked Lygus Bug, have specialised mouthparts, like a hypodermic needle, which they use for sucking sap from plants. Females have needles at the other end as well, which they use for piercing plants and laying eggs in them. In small numbers they don’t do much harm, but some Lygus Bugs can become a serious agricultural pest, particularly where you have very large fields of a single crop and thus, no habitat for their predators. 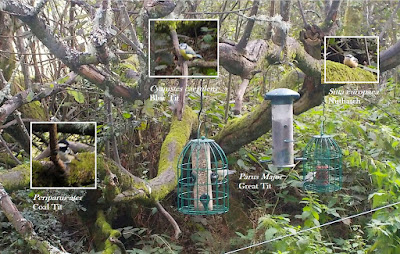 I’ve heard a few vague tweetings, and there’s a buzzard mewing above us but I see some bird feeders up ahead so, if we stand still and try to look like tree stumps (difficult in your bright pink anorak, but do your best), we’ll wait and see who comes along. There’s a Great Tit on the feeder already and a Blue Tit up in the branches waiting to come in (the Great Tit is slightly bigger, more boldly marked and has a black cap as opposed to a pale blue one). Just over to the left is a Coal Tit, with a black cap which has a white patch at the back and a greyish chest. That’s out tits sorted out (behave), but over to the right we also have a Nuthatch. These are more closely related to Wrens than to Tits and have a similar crouching posture. But wait, did you see something move on the ground beneath the feeder? 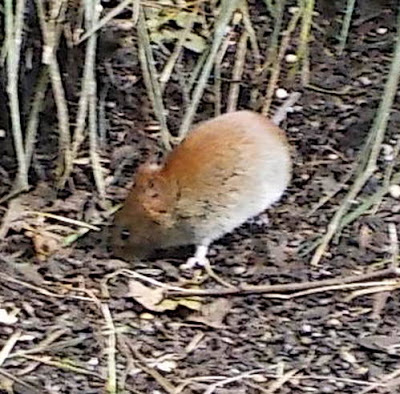 There, just coming out of that tussock of grass, it’s a little Bank Vole. It looks very mouse-like but it’s tail is quite short and straight, whereas mouse tails are quite long and often seem to have a life of their own, quite independent to what the rest of the mouse is doing. Voles are a big favourite with birds of prey which means that they are very cautious as a rule but this one has a couple of advantages. Firstly, the Tits are wary of Birds of Prey too and set up an alarm call if there are any about, and secondly, birds are such messy feeders that there are plenty of seeds on the floor so he doesn’t have to concentrate too hard on finding his food. 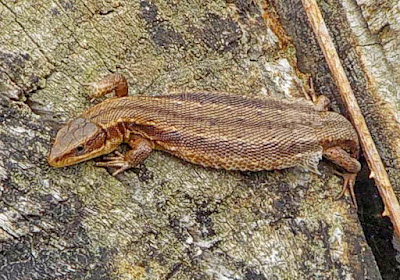 That was a nice find and it was good to watch the small Passerine birds up close and personal. I think we’ll just take a seat on this beautifully carved wooden bench and watch the hay meadow for a bit.

“Excuse me, but is this seat taken?”

Would you believe it, there’s a Lizard here, calmly shedding its skin, without an apparent care in the world. Lovely habitat for him here, plenty of insects and spiders in the hay meadow, good cover with old logs along the verge of the path and a nice warm bench to bask upon. I one rescued a lizard from a cat in a Cretan taverna. He spent the entire meal curled up in the cradle of my arm, much to the amusement of my fellow diners. Lovely little creatures.

Until next week, when we’ll be walking around Sale Fell, up to our left there,