The Roar of the Razorbills (St. Bees Head) 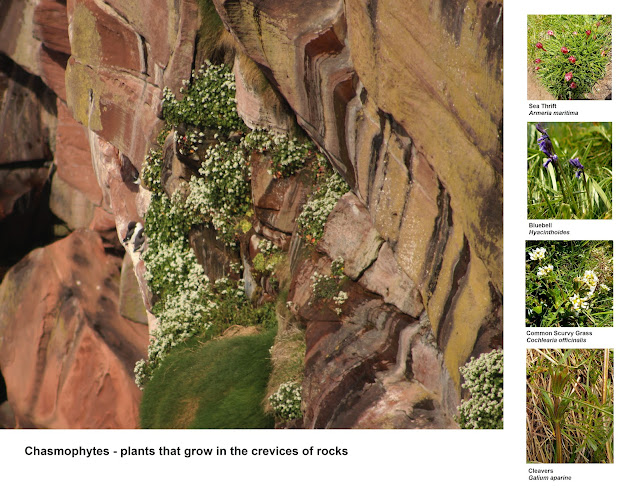 Today, we're wandering along the cliff tops at St. Bees Head, near Whitehaven. It's a beautiful sunny morning here in Cumbria, so let's start by looking at a few cliff top plants. The Sea Thrift is just coming into flower. The word 'thrift' comes from the verb 'to thrive' (to survive in adverse conditions), which is why you can find it on the back of some old threepenny pieces, when you had to be thrifty to survive with only threepence in your pocket. We also have some Bluebells making a stand out of their usual woodland habitat, and, clinging to the cliff face, a beautiful display of Scurvy Grass. This is full of vitamin C and used to be taken on board ships to ward off scurvy. Scurvy ale was brewed with it. Finally, and easy to miss as they trail through the grass, we have some cleavers. If you pass me a bag, we'll gather some of these to make a curry or something in Steve's Wild Kitchen on Foodie Friday. Keep an eye on the website, Steve's Nature Plus, which has oodles of fascinating stuff on it and is updated throughout the week. 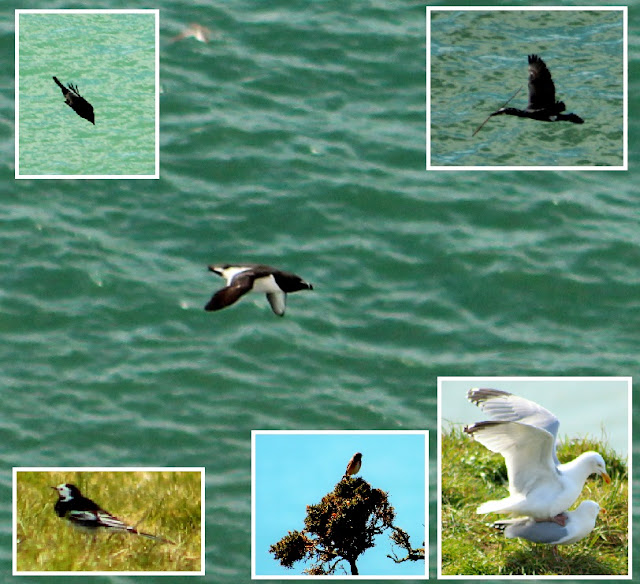 Looking down to the bottom of the Scurvy Grass, you may have noticed a pair of Razorbills. More about those later, but looking out to sea we can see them flying in to their perches, as well as Jackdaws wheeling and diving and a Cormorant bringing in nesting material. On the cliff top, there's a Pied Wagtail darting about, a Linnet singing from the top of a gorse bush, and it's mating time for The Herring Gulls. It's all happening up here! 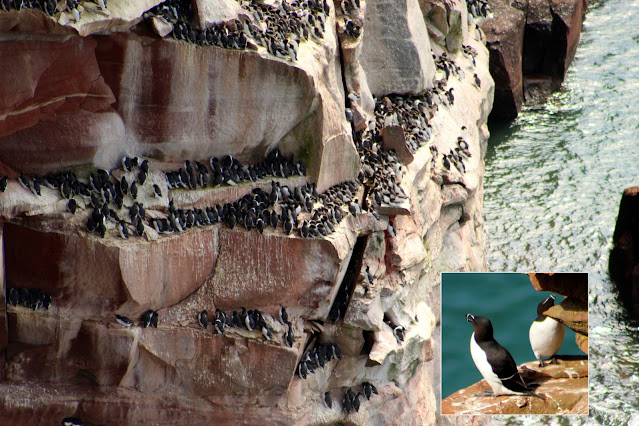 But the bird of the day has to be the Razorbill. There must be hundreds of them covering every conceivable ledge, nook and cranny. The noise is incredible down here on the cliff face, but due to the sheerness of the cliffs you can't hear a thing up top. The Razorbill, Alca torda, is also known as the Little Auk and is a close relative of the Great Auk, which went extinct in the 19th century. They are, themselves, a 'Near Threatened' species on the IUCN Red List. They pair for life and only produce one egg per year, when they are between the ages of 3 and 5. They are also incredibly choosy about their nest sites and this cliff face is the only place you will see them in the north west of England. The majority of the remaining world population (estimated at less than one million breeding pairs) breed in Iceland.

(I'll be putting up a short video on Steve's Nature Plus later today, if you'd like to hear them). 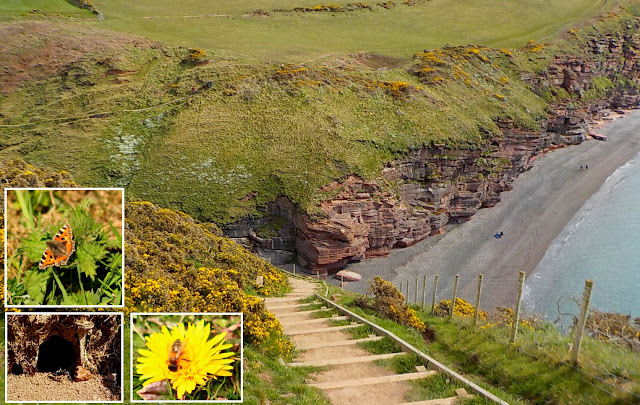 Our Intrepid Local Guide informs me that to continue our clifftop walk, we first need to descend to beach level and then climb up the other side. So, it seems to be a good time to turn around and go for an insect safari, particularly as Jack the Navigator Hound nearly gave us a heart attack just now by standing right on the cliff edge. As he is over fifteen years old, stone deaf, and as myopic as a bat who's lost his spectacles, this was not a naturally tenable place for a Jack Russell to be.

As the plants are beginning to burst forth, the insect Spring is now getting well and truly under way. Ants are beginning to build their nests in the soft, warm earth. Not sure which species this is, but that's a magnificent arched entrance they've built and a lovely flat terrace. There's a Honey Bee pollinating a Dandelion over there. Bees, Wasps and Ants are all closely related in the insect order Hymenoptera, along with Sawflies (which aren't flies at all). Many things are called flies but aren't, like that Small Tortoiseshell Butterfly (Butterflies and Moths form the insect order Lepidoptera). Notice that she's perched on a Stinging Nettle. Many Lepidopterans choose particular plants for their caterpillars to hatch on, and the Stinging Nettle is the preferred food plant for Small Tortoiseshells. Large Tortoiseshells (which look very similar) prefer to lay their eggs in trees such as Elms and Willows. 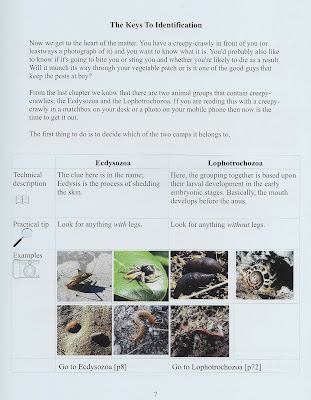 It's little bits of knowledge such as this which really help when you're trying to sort out who's who in the minibeast world. But, before you can get down to identifying individual beasties, you need to know to which order your animal belongs. This can be difficult as there are over twenty different orders, and insects in particular, have a tendancy to mimic insects in other orders. Which is why I wrote The Quick Guide to Creepy-Crawlies because I couldn't work it out either, and although there were plenty of books on the various orders, I couldn't find a basic book to tell me which of the other books (or internet sites) to look at. The Quick Guide contains very simple keys that allows me to identify any of these little guys, anywhere in the world, to order level. Most of you probably have a basic plant guide and a bird book or two on your shelves; the Creepy-Crawlies book completes the set. It's all very simple when you know how!