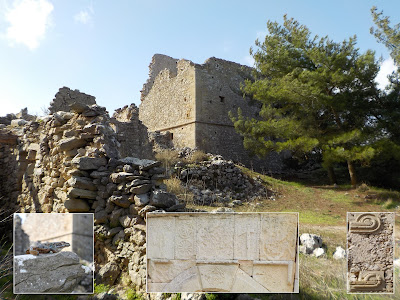 What a beautiful late Autumn day. Just the sort of day for strolling around an uninhabited historic village and looking for wildlife. This one, called Voila (pronounced Vo-i-la as opposed to the French voilà) is Venetian in origin under the fiefdom of the Salomon family but when Crete was taken over by the Ottoman Empire[1] in the mid seventeenth century it became the headquarters of one Jen Ali, a famous commander in his day. Nowadays the tower, on which Turkish motifs can be readily discerned, are guarded by a small Cretan frog where armed janissaries once stood. I wonder if there are any bat roosts hidden within?

Unfortunately not, nor anything more remarkable than an old pigeon's nest. It was also rather chilly in there and as the sun is shining down magnificently on the south east side of the village I suggest we make our way over there, nosing through the ruins as we go, and see if we can find some more wildlife. That's better, the ground is covered in lichen covered stones and a host of tiny flowers. These lovely little crocuses, Crocus laevigatus, are particularly attractive I think before they are fully open. Those deep lilac streaks on the underside contrasting strikingly with the snow white petals and then, gradually, the divided orange stigma are revealed. Like a firework in slow motion. 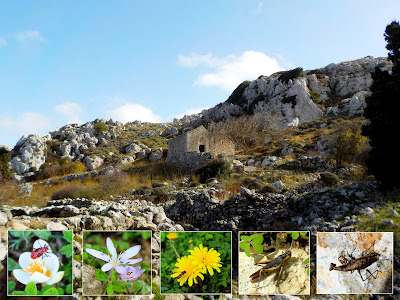 And where we have flowers then of course we have insects and it really is a thriving metropolis down here. Let us repose upon the carpet of Wood Sorrel leaves and observe the action at eye level. There's a small black wasp doing a complicated waggle dance amid an audience of harvester ants here and on one of the crocuses a red and black Soldier Bug nymph is exploring his new world. A few minute black fly-like insects on that Colchicum over there, no bigger than its stamens, require closer inspection and a Marmalade Hoverfly has been attracted to the bright yellow composites that are also dotting the scene like Belisha Beacons along the highways. Sunbathing on the stones a Short-horned grasshopper is looking forward to a light salad lunch whilst nearby an Ameles mantis waits in motionless ambush for a somewhat meatier meal. I could lie here all morning fascinated by this miniature world but there is something I have yet to see this autumn and I wonder if we'll find any examples up by that church up yonder? 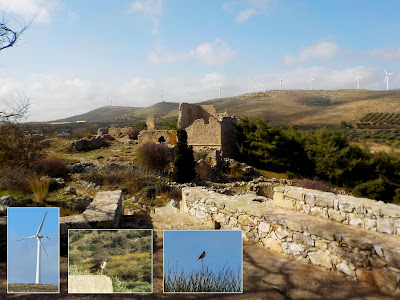 This is the church of Agios Giorgos and the last resting place of the Salomon family (they're in the extension apparently if you'd like to go in and say hello). Personally I'm going to do a bit of bird watching. There's a great view of the village, the valley and the windmill dominated hills behind and the first thing I see is a pair of large birds of prey rapidly approaching the spinning blades. A bit distant but I think that the lead bird, at least, may be a Griffon Vulture. There's also a Buzzard on the corner of that building down there. He's spotted something... and he's off. And scanning around to that stand of Weaver's Broom down to our right a Stonechat has just landed. I saw a Black Redstart as we passed through the village of Chandras as well. They started arriving in the second week of November and my own personal lodger has occasionally roosted above my bedroom window when the weather has been less than conducive to spending the night in the open. 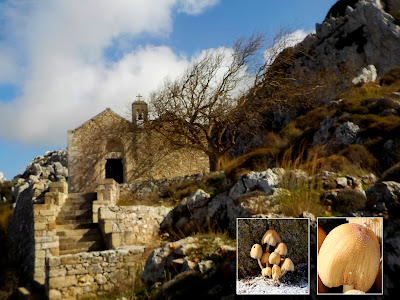 Meanwhile I do believe that the items for which I've been looking are lurking alonside the roots of this tree. Our first fungi of the autumn and edible ones at that. These are Mica Caps and if you look closely at the cap you can see the tiny glistening specks that give it the name. A couple of words of warning before you squirrel them away into your bag. Firstly, they must be cooked within the hour or they dissolve into a horrible squidgy inedible mess. Secondly, some related species react with any alcohol in your stomach so it is inadvisable to drink about three hours either side of eating them. Thirdly, they're rather good at picking up heavy metals from the soil so avoid collecting them from roadsides or polluted sites. And finally... I think I see the local priest arriving and he may have something to say about you pinching his breakfast. In all honesty, once you've covered points one to four and checked that there are no fly larvae lurking within, their flavour is so very delicate that you wonder if they were worth the trouble.

[1] If you would like a good read about this period of Cretan history in the east of the island then Yvonne Payne's dramatic account of the Kritsa heroine, Rodanthe is well worth adding to your library. Details here.

Now, cast your mind back two years ago to the day we explored the grounds of the Porto Belissario Hotel. There we found a Western Conifer Seed Bug and I opined that it was the first time that it had been recorded on Crete. It turns out that I was correct and I am most grateful to Torsten van der Heyden for crediting me with its discovery on the island in his paper published on November 20th in the entomological journal Arquivos Entomoloxicos Galegos