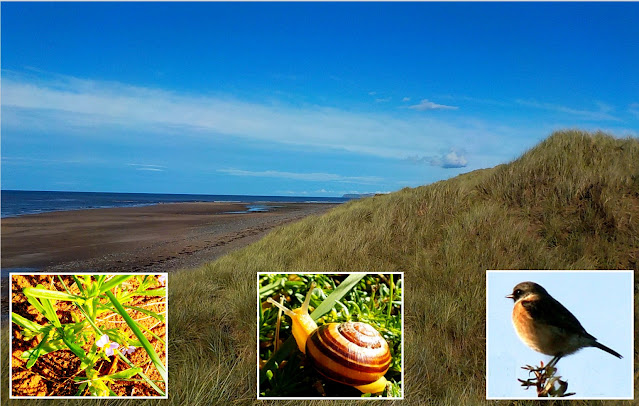 How do you fancy a trip to the seaside? Or, more specifically, hunting for adders and tiger beetles in the sand dunes? We’re off to Drigg this morning, where I’ve heard that adders have been spotted recently and also to look for one of the UK’s rarest beetles, the northern dune tiger beetle, Cicindela hybrida, which has only been recorded here and at the sand dunes of Sefton, North Merseyside. 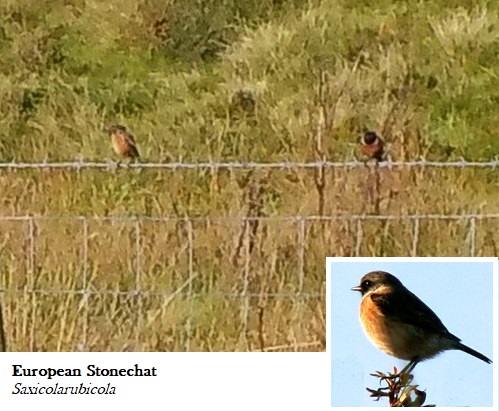 If we park up in the village here, then it’s just over a mile’s walk to the dunes, but it will give us a chance to look at the hinterland behind the dunes which seems to be mainly pasture and salt marsh. There’s a pair of raptors quartering the marshes, too distant to identify, but quite a few Stonechats using the fences as vantage points. These birds, relatives of wheatears, redstarts, flycatchers and robins, like to perch on bushes, such as gorse, and utter their call, which has been likened to two pebbles being clicked together. We’ve met this ‘Devil Bird’ before, you may recall, and the Scottish folklore that surrounds it, in Skordilio, Where God and The Devil Meet over in Crete.

Here we are on the dunes with their own, specialised, flora and fauna. There’s Sea Rocket down here, where the dunes meet the beach, and this has adapted to the habitat by producing cork-like seeds which float down the coast by longshore drift (one of the two things, along with ox-bow lakes, which we all seem to remember from school geography lessons), where it will establish new colonies. Another dune specialist is this Sea Spurge, which is a type of Euphorbia. Euphorbias are named after Euphorbus, the Greek physician to the King of Nubia (Juba II who married Antony and Cleopatra’s daughter). It was Euphorbus who noted the plants’ great laxative powers (history does not record how – possibly too much information), from which we get the common English name, Spurge, which simply means to purge.

There’s also Hedge Parsley, Wild Thyme and Bloody Cranesbill up here and an inordinate number of snails crawling about amongst this Lady’s Bedstraw (so called because the dried plants act as a flea repellent and, in mediaeval times, lady’s mattresses used to be stuffed with it). These two, I’m fairly sure, are in the Cepaea genus, because of their striped shells. If you look at the lip of the first shell you can see that it is brown, making it a Brown-lipped Snail, Cepaea nemoralis, whilst the lip of the second one is white, making it a White-lipped Snail, Cepaea hortensis. I am not, however, a snail expert, so please feel free to correct me if I’m wrong. 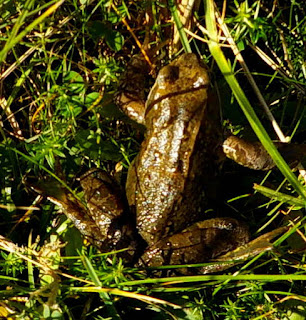 Snails are one of the menu items of choice for the European Common Frog, along with slugs, worms and insects – particularly flies, according to Sergius L. Kuzmin of The Russian Academy of Sciences. So this little fellow, sunbathing in the grass down here, has a choice of breakfasts as, not only are there a number of snails here, but also plenty of Crane Flies. Frogs themselves are favourite prey items of snakes, which is one of the animals we’ve come looking for today, but unfortunately they are conspicuous by their absence. I’ve a feeling that, despite the warm October sunshine, it is still a mite too chilly, and even more so for the Northern Dune Tiger Beetles which are probably tucked up snug in their burrows. Not a waste of time though, with our rapidly diminishing biodiversity, sometimes what you don’t see can be as important as what you do see.

It’s been a lovely morning for wandering about the dunes and these days we have to make the most of the ones that are left, as we’ve lost about 80% of this type of habitat in the last 80 years. All part of the Great Habitat Loss that is driving the current Mass Extinction Event, unfortunately. All is not totally lost however as the Dynamic Dunescape Project is making heroic efforts in dune conservation. Click on the link for an excellent article by Natalie Hunt about the project in general and the Northern Dune Tiger Beetle in particular.

That’s all for now, see you next week when we’ll be off to look at another one of those big puddles – Loweswater.

For the budding naturalist in the family, The Quick Guide to Creepy-Crawlies is a great introduction to invertebrates, suitable for all ages.

If you only want to spend a fiver on a friend, then Not Just For Twisted Women is available in paperback now, and The Eggs of Saramova and other stories will be available next month.

If you just want a little something for yourself to read, now that the nights are drawing in, then both story collections are available on kindle for the price of a decent cup of coffee.

Much as I hate self-promotion, people do tell me that they’re all cracking good books!