Due to the current crisis, facebook are not allowing links

to be posted to sites talking about microscopic things

beginning with v. As my next blog is about bacteria,

archaea and microscopic things beginning with v they

have blocked links to it. Try 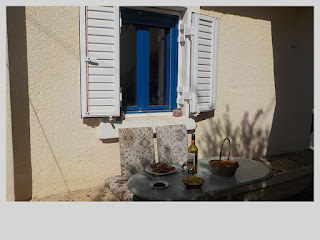 The topographer came yesterday to measure the house and grounds in case they had mysteriusly changed since the original contract of sale (they had; another storey had been added which the builder and architect had assured us that they would legalize but apparently... and a couple of metres of land behind the house had sort of atttaced itself to the new government Land Registry – nuffink to do wiv me guvn'r, me 'and must of slipped when I was mappin' it on Google Earf). So, with a bit of toing and froing with lawyers next week the house should be legal enough to sell. The topographer swarmed up and down walls and olive trees with his GPS on a stick, the real estate agent bumbled about trying to look useful and I weeded the garden. When they'd eventually beetled off I tidied the barbecue area, sat down to an al fresco luch and looked over the last five series of the Crete Nature Blog. What fun we had! 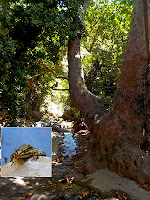 Series six took us on a tour of the upland villages of eastern Crete. We went carob kibbling in Schinokapsala, communed with the endemic Cretan Frogs in Orino, explored the gypsum hills of Chrysopigi, learnt the explosive history of Santa Barbara (which wouldn't be out of place in a Terry Paratchett Discworld Novel) in Sklavoi, and investgated the strange purple ponds of Lithines amongst other adventures en route. 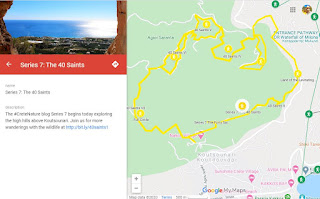 Series 7 took us on a long, circular route around Agioi Saranta (The 40 Saints), a limestone massif above the village of Koutsounari. Here we tracked the progress of a pair of ravens which we named Huginn and Muninn and who eventually delighted us by producing a third raven which we named Loki. We also came across some goats that appeared to be experimenting with levitation and a whole host of orchids that, in some places around the Mediterranean, are being eaten to extinction by.. us humans! 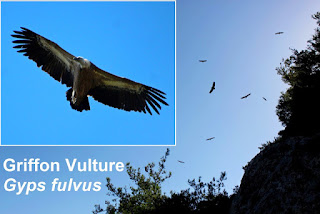 By the time Series 8 came around the blog was getting to be pretty popular and people were asking if they could join me on my walks and I dutifully obliged with a programme of Sunday Strolls. These took us to places such as Bramiana reservoir, the delightful little village of Sisi on the north coast, the Almyros wetlands and Kroustas Forest where we were treated to a spectacular flypast of Griffon Vultures. We also enjoyed some fabulous lunches at village tavernas. 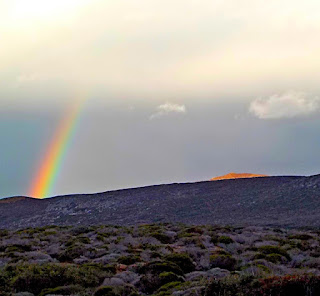 When Series 9 came around it was time for a revamp. Although we hadn't been everywhere and seen everything the places left to visit and the wildlife yet to be observed were taking on an all too familiar hue. A couple of new features were Walking Notes so that anyone could follow our adventures at a later date and In The Lab. Apart from loafing about the countryside and blogging about it you may be surprised to know that I am a Consulting Naturalist doing field research for various universties, monitoring various insect migrations such as the Painted Lady butterfly and the Marmalde Hoverfly. This often involves lab. work so I invited you into my home laboratory to see what I get up to when your not looking. (I am really looking forward to setting up a new home laboratory when I get to Cumbria). 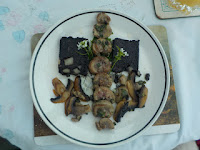 Finally we started doing a bit of Fieldcraft and Foraging and following on from this, tasting the results which led to a spin-off blog, Steve's Wild Kitchen with recipes including Chicken Chow Mein with Wood Sorrel Root, Simple Marmalade and the Great Cumbrian Breakfast with Garlic Mustard. This is something I hope to develop more when I start inflicting my blogs on you from Cumbria.

Apart from that I've written The Quick Guide To Creepy-Crawlies which can be used anywhere in the world and is suitable for all ages. For this, and for other books I have written or have yet to write, you can follow me on Amazon or if you have a general interest in Greece and the Greek islands (as I know many of you have) I am currently pulling a group of bloggers and authors together under the banner Books & Blogs Authors and here you can find all of your favourites: for all the latest publications from myself, Yvonne Payne, Janet Ellis, Kathryn Gauci, Richard Clark, Gabi Ancarola, Marjory McGinn, Chris Moorey, John Manuel, Suzi Stembridge, Ian Yates and Ruth Kozak with more to come.